The recent election of Htin Kyaw as the first democratically elected president of Myanmar in more than 50 years marks a big step forward for the country’s fledgling democratic movement. Htin Kyaw is a longtime friend and confidant of the pro-democracy icon, Aung San Suu Kyi.

Although a quasi-democracy had been introduced in Myanmar in 2011, the process of transfer of power to a civilian administration will only be completed once this government takes office on April 1.

In the last general elections held on November last year, Aung San Suu Kyi’s National League for Democracy (NLD) won a thumping majority, bagging 135 out of 224 seats in the Upper House and 255 out of 440 seats in the Lower House, clearly showing that ordinary citizens of the country are tired of the long-ruling military junta.

Much water has flowed down the Irrawaddy since the military junta had nullified the results of the 1990 general elections when the NLD had picked up 392 out of the 492 seats at stake.

What is very encouraging is that until now the military has not tried to derail the process of transfer of power to the civilian government, even though doubts had been expressed by various quarters about the same.

At the same time, there is no denying that a big tussle lies ahead between the new civilian administration and the military, which has strong and deep entrenched interests.

The real power behind the throne

While Suu Kyi is the best-known face of the pro-democracy movement in Myanmar, she is barred by Myanmar’s military-drafted constitution from taking up the post of president, as she is married to a non-Myanmar citizen.

In the weeks before the election of Htin Kyaw as the new president, Suu Kyi and the NLD had tried their best to get the military to either remove or suspend this clause, but to no avail.

It is no wonder that the new president-elect has an unenviable task at hand. On the one hand, he would have to do the bidding of Suu Kyi, while on the other, the Tatmadaw will keep a close eye on him.

However, Suu Kyi has been nominated to the cabinet and is tipped to lead four key ministries – that of the president’s office, the foreign ministry and the energy ministry, besides education.

By making it clear that she would be “above the president“, Aung San Suu Kyi has made her intentions quite clear.

The Tatmadaw hangs on

Meanwhile, the armed forces (Tatmadaw) in Myanmar still remain a formidable force and retain 25 percent of the seats in the new parliament. In addition, the military-drafted constitution allows it to nominate representatives to head the sensitive ministries of border, home and defence.

So, why is the Tatmadaw hanging on? Firstly, with different ethnic insurgencies still running in Myanmar, the military sees itself as the guarantor of the country’s security and unity.

Moreover, many sections of the Tatmadaw are worried that in case they relinquish their claim on power, they may be making themselves liable for prosecution.

The military has huge economic interests and investments (in areas such as real estate) in the country, and would not like to see them being questioned once the civilian administration takes over later this week.

And lastly, by nominating Myint Swe, a former general who has been blacklisted by the United States as one of the two new vice presidents, the military is signalling that it is in no hurry to relinquish its prime position in Myanmar’s political milieu.

The new civilian administration faces a host of challenges. To begin with, ordinary citizens of Myanmar have high hopes from the new government, and it would have to work very hard to stand up to the people’s faith.

Myanmar’s economy had remained closed for years and even though the economy has seen infusion of fresh foreign capital, growth remains sluggish at best. Besides, the country has seen unequal levels of development in its various parts.

Additionally there is the issue of the Rohingya refugees in Myanmar, which has brought international attention – and flak – on the country.

The Rohingyas are an ethnic Muslim minority in Myanmar, which is an overwhelmingly Buddhist country, while the government insists that they are actually Bengali immigrants.

However, it is Suu Kyi’s studied silence on the Rohingya issue that has befuddled all observers. During the last general elections, all major political parties, including the NLD, sought to skirt the Rohingya issue.

Recently, some news has come to light wherein Suu Kyi is reported to have remarked that “no one told me I was going to be interviewed by a Muslim” following some intense grilling by a BBC News presenter from a Muslim background.

Finally, the new government will have to walk a tightrope when it comes to its foreign policy. The military junta had gradually distanced itself from Beijing and moved closer to the West and countries such as India.

The new government will have to weigh its interests very carefully on the external front as countries across the world woo Myanmar, which is still a largely untapped market.

Hence, it is no wonder that the new president-elect has an unenviable task at hand. On the one hand, he would have to do the bidding of Suu Kyi, while on the other, the Tatmadaw will keep a close eye on him.

Besides, he will have to juggle his priorities on both domestic and external fronts. Hence, for Htin Kyaw, it could well be a classic case of being caught between the devil and the deep blue sea. 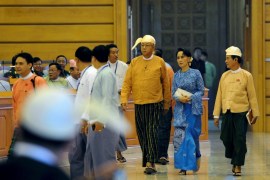