Vladimir Putin’s unpredicted announcement of a withdrawal of the “main part” of Russian military forces from Syria has hit many as a huge surprise, even a shock. Many thought Russia was going to put down permanent roots, turning Syria visually and actually into a client state.

Surely, many commentators said, Russia was there for the duration to oversee a complete Syrian regime victory, so how come he is leaving?

This raises serious questions both to Putin’s original intentions in intervening in September and his rationale for a “withdrawal” six months later.

Back in September there was huge shock, too. But was a wounded Russia, smarting from Libya and Ukraine, going to allow the Syrian regime to fall and the United States to take credit for yet another regime change?

Turn over the table

As Frank Underwood, the lead character from the House of Cards, is fond of stating, “If you don’t like how the table is set, turn over the table”. Putin did just that.

The history of the interceding months demonstrates how Putin has dominated the Syrian political scene, hoarding the key cards to himself, and reinforcing Russia’s key interests.

The cessation of hostilities was Putin’s crowning achievement, permitting both a resumption of a political process that he can manipulate and a partial withdrawal of Russian forces. Russia proved how indispensable it was to the resolution of the Syria crisis.

The cessation of hostilities was Putin's crowning achievement, permitting both a resumption of a political process that he can manipulate and a partial withdrawal of Russian forces.

Although many actors, from the Syrian opposition to Turkey and Saudi Arabia, are furious, all have to acknowledge Putin’s supremacy.

The Russian president has suffered no isolation among Arab leaders, many of whom have jetted off to Moscow. Both Muhammad Bin Salman of Saudi Arabia and Muhammad Bin Zayed of the UAE met Putin in Sochi in the autumn.

US-orchestrated regime change is is out of the question. Mass popular protests, anathema to a regime like Putin’s, failed. Add in the Russian airbase Hmeimim and an expanded port at Tartous, and it is clear the rewards for Putin have been huge.

Why a withdrawal now?

So why a “withdrawal” now? Putin is cashing in his chips. He gives the appearance of leaving, even if Russian forces will very much remain.  Nobody is arguing even on the fringes that he is doing so from weakness, chased out of the Levant as the Soviets were in Afghanistan or the Americans in Iraq.

He has navigated his way through the minefield, with barely any loss of Russian life, low costs and avoided, for now, the danger of getting bogged down. The Russian economy could have survived a more protracted engagement, but why drain the sparse coffers of more than is needed.

A partial pull back allows him to offset any fallout with oil-rich Gulf monarchies. They are grudgingly admiring of Putin’s determination to stick by his ally and deploy force strategically.

The decision is also easily reversible. Putin can slow or speed up the process at will. No deadline was given. His planes are still bombing Palmyra. All Russia’s gains can be protected. The S-400 anti-aircraft missile system ensures all talk of a no-fly zone remains mute.

The timing is all political not military. This announcement was made deliberately for the start of the Geneva talks. Putin can be blunt in his messaging (Litvinenko!) – we are meant to get the point. If the military bombing was a monster keep-out message to Washington, the withdrawal is a message to Bashar Al Assad and to other key players in the regime. Russia calls the shots, not you.

The Kremlin has been quietly seething over Assad’s stonewalling over countless requests for confidence-building measures.

The Russian military were also dismissive of the Syrian military’s performance. The big question is – was this meant to push the regime to negotiate seriously in Geneva, or for Assad to move aside for a more acceptable Putin puppet?

ALSO READ: Moscow and Washington are not that far apart on Syria

Putin can now pose as being all pro-peace. He boasted that: “The effective work of our military created the conditions for the start of the peace process.”

Far from his Foreign Minister, Sergey Lavrov having to fend off heated criticism, he will be able to challenge others claiming that they are “withdrawing” forces for peace and what is everyone else doing?

Russia may sidestep any failure in the talks, even though Russian bombers killed around 2,000 civilians, displaced hundreds of thousands and pummelled an extensive array of hospitals, schools and other civilian infrastructure.

So is Putin the grandmaster or the Kremlin’s version of Frank Underwood? He has played his cards effectively and brutally while Barack Obama looks bereft of ideas, no sign of a plan and worse, lacking interest.

All Putin’s manoeuvrings are to secure short-term Russian interests while Obama feels he has none to defend in Syria. The tragedy is that neither leader has a strategy to help Syrians.

Chris Doyle is the director of the London-based Council for Arab-British Understanding (CAABU). He is regular opinion writer on the Middle East and arranges delegations of British Parliamentarians to the region. 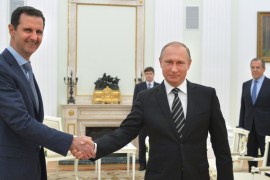