Last week, Ori, an Israeli boy, went on a field trip with friends to the archaeological site at Tel Rehov in the Jordan Valley. Wandering among the dust and the stones, he kicked away a small pebble and revealed a stone head half-buried in the ground – it turned out to be a spectacular find, a small statue of a woman, her hair elaborately styled, that may be a devotional figurine of the fertility-goddess Astarte, more than 3,000 years old. Ori handed his discovery over to the authorities.

This kind of “surface find” – albeit an unusually fine example – is not uncommon in the Middle East, where thin soils and intensive farming on land that has been tilled since antiquity regularly throw up archaeological artefacts of exquisite beauty and great value.

In recent years, the ease with which such discoveries can be made has been exploited by rapacious black-market antiquity dealers, criminal gangs, terrorist organisations, such as the Islamic State of Iraq and the Levant group (ISIL, also known as ISIS), and by the poor people whose livelihoods have been shattered by war and political turmoil.

Looters can burrow relatively shallow holes into the ground, particularly at known ancient sites, where they can be rewarded with a handful of coins, a cylinder-seal, or a statuette.

Satellite imagery, for example as recorded by Sarah Parcak, winner of the 2016 TED prize for her work in this field, shows sites in Syria and Iraq that were once marked out for future archaeological excavation now peppered with holes, more closely resembling the pock-marked surface of the Moon.

ALSO READ: King Tut and the secrets of the hidden chambers

The trade in illicit antiquities continues to thrive, with many pieces from ISIL-controlled territory in Syria and Iraq reaching the black market through trading posts in Lebanon and Turkey. Some artefacts are sold directly by ISIL’s directorate of natural resources, others by private individuals, on whom ISIL levies a tax.

Still more pieces are probably being squirrelled away in caches, where they will sit until the gaze of international scrutiny starts to wander from the antiquities trade.

Steps are being taken to combat the trade in illicit antiquities. The UN Security Council has passed a resolution banning the trade in antiquities from Syria, as has long been the case for Iraq.

And, at a conference last week at the Courtauld Institute of Art, Giovanni Boccardi of UNESCO announced a new smartphone app that allows individuals to record data on heritage destruction.

The United States government has extended the reach of its “rewards for justice” programme to information leading to the significant disruption in ISIL’s trafficking in antiquities.

But smugglers – and attempts to fight them – are already a long way down the supply chain from the actual looting of antiquities. Nor is the calculus straightforward.

What steps can be taken to address the desperate acts of looting committed by individuals who have lost everything in the wars in Syria and Iraq?

What steps can be taken to address the desperate acts of looting committed by individuals who have lost everything in the wars in Syria and Iraq, and for whom the sale of a few bronze coins, dug up in an empty field, will put food on the table?

I have written previously about the need for community engagement in cultural heritage protection, whereby people living near to ancient sites are persuaded of the economic benefits of preserving a site intact, with all its antiquities left in place.

But the immediate demands of the extreme privation suffered by many Syrians are likely to outweigh such long-term considerations.

The antiquities looting crisis in the Middle East – one aspect of the region’s broader cultural heritage destruction disaster – will probably persist at least until the wars in Syria and Iraq are brought to an end.

It is a cruel irony that the richness of the cultural history of the region, and the relative ease with which material evidence of that past can be recovered, makes the Middle East a fertile land for antiquities looting.

So bleak is the picture on the ground that we can do little more than hope that others will follow little Ori’s example, by holding on to any antiquities they find until they can be handed over to the authorities. 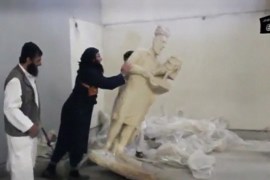 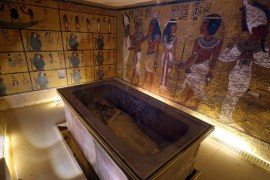 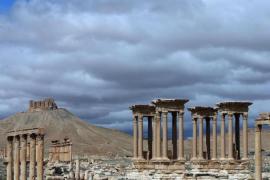 Ancient sites in the Middle East