It is always debatable whether the Crusades remain relevant in Arab political rhetoric. Islamists in general believe that the Crusades are relevant because they resemble – in their minds – current Western and Israeli wars in our region.

Many Islamists still label Western governments, and even Christians as a whole, as “Crusaders”. As offensive as that sounds, it reflects a historical continuity on their part in analysing the “West”. Bernard Lewis thought that Muslims are too obsessed with the Crusades; Orientalists often complain that Arabs are too historical-minded.

Yet the discussion about the Crusades is not irrelevant. It has been made relevant by virtue of the consistently anti-Islamic rhetoric of people and governments in the West.

When the President-elect of the United States, Donald Trump, calls for an official ban on the entry of all Muslims to the country, when various cities and governments in the West innovate various restrictive and repressive laws tailored against Islam and Muslims, and when a major US minister, Franklin Graham (who gave the inaugural prayers for George W Bush upon taking the oath of office), gains followers as he insults Islam and its Prophet, Muslims see a link.

It is not irrational for Muslims to see parallels between the modern forms of Islamophobia and the historical Christian animosities towards Islam and Muslims. Even the last Pope, Benedict XVI, spoke about Islam, in the pseudo-academic Orientalist language of yesteryears, in the same manner that Christian polemicists spoke about Islam in Latin in medieval times.

Islamists, and even Muslims and Arabs, see that there is a powerful Western (religious and secular) ideology of hostility stretching from the times of the Crusades to the 21st century.

The Crusades were not a passing event in world history. It was an official, divinely argued attempt to eradicate a religion and a civilisation due to religious bigotry – and also for economic reasons that were disguised behind religious rhetoric.

They were also an occupation project that intended to subjugate the natives through colonial-settler communities and kingdoms. Westerners rarely took note of the cruelties of the Crusades not only against local Muslims but also against local Christians and Jews.

The Crusades – in their various phases and campaigns – stretched over several centuries and it is doubtful that Western governments and people realise the catastrophic impact of those campaigns.

The Crusades were terrible events in the history of Islam and the Middle East region. They reveal to Arabs and Muslims that their very presence in their own lands and countries is subject to Western rejection and forcible eviction.

Islamists may exaggerate the role of religion as an impulse for the Crusades – historians often point to other political and economic factors – but what is unmistakable is that the language of Western conquest has not improved.

Western bombing and occupation of Arab and Muslim lands still adheres to the bigoted rhetoric of the Crusades; and sovereignty of Arabs in their own countries is of little significance to Western governments.

Ironically, the Crusades in Western imagination – in literature and arts – are still romanticised and portrayed heroically. Even Ridley Scott’s 2005 movie Kingdom of Heaven missed the mark on many of the facts and presented the Arabs inaccurately and insensitively.

Sometimes it seems that the Westerners are more obsessed with the Crusades than the Arabs. But the Arabs notice, and will continue to notice, the resemblance between current Western political rhetoric and vulgar hostility and hatred of Muslims with the papal rhetoric of the Crusades.

The conflict between the West – a short-cut reference to Western governments – and the Arab and Islamic worlds is at its core political. It does not revolve around religious issues, although the language of hostility and conflict draws upon religious terms and jargon.

The fact that the underlying causes of Arab and Muslim antipathy to Western governments are political in nature refutes the classical Orientalist assumptions about the centrality of religion in Arab political behaviour and thought.

The notion that the basis of Arab resentment against the West is purely religious is a deliberate attempt by Western governments to deny responsibility for their wars and actions in the region.

Historical events last or vanish depending on their relations to modern realities. No Arabs today hold grudges against the Mongols, for example. The political salience of the Crusades is related to the ability of average Muslims to see resonance from the times of the Crusades in the rhetoric and behaviour of Western governments.

To be sure, the notion that all current behaviour in the West is driven by a deep religious factor misses the point. But secular and religious movements in the West often attribute similar hostile tendencies to Islam and Muslims: some Western atheists today are as dedicated to agitating against Islam and Muslims as American evangelical Christians.

Ultimately, understanding between people and religions is not settled by changes in words or even by historical apologies – rarely offered in the case of Muslims despite the perfunctory apology by Pope John II for the Crusades.

Muslims and Arabs are not holding a grudge against the West for the Crusades but for the current injustices and wars imposed by Western governments on Arabs and Muslims.

The fact that the ideology of hostility against Islam and Muslims continues to prevail in Western societies allows Islamists and others to draw – rarely useful and politically unfair – religious analogies between the past and the present. But it is up to Western governments – and not to Islamist demagogues – to make the Crusades a relic of the forgotten past.

As’ad AbuKhalil is a professor of political science at California State University, Stanislaus. He owns and writes at the Angry Arab News Service blog. 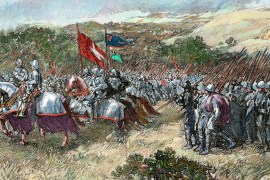 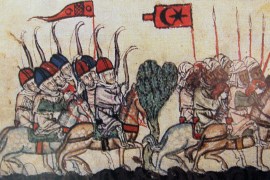