There’s a rumour going round our post-Brexit Britain that the United Kingdom government has a say in the Brexit negotiations.

There’s an even more quaint idea that this is going to be a negotiation – not a bulldozer of a deal that European trade negotiators have become so adept at rolling out against lesser nations.

Some are even deluded enough to think that the Brexit “quartet” – International Trade Secretary Liam Fox, Foreign Secretary Boris Johnson, Prime Minister Theresa May, and the Secretary for “Brexit” itself, David Davis – are “in charge” of Brexit negotiations. They aren’t, we aren’t, but the Europeans most definitely are.

By Europeans, I mean firstly the powerful European People’s Party (EPP), a transnational alliance of centre-right politicians wielding enormous influence across the European Commission and the domestic politics of many European countries.

The EPP is a pro-European conservative grouping most Britons probably haven’t heard of, but it plays an immensely important role in European life.

The EPP currently monopolises nearly every serious position within the European Union establishment, has been the largest political party operating within the Union since 1999, and is increasingly independent from its principal sponsor – Angela Merkel.

The EPP also, crucially, despises the same British Tory party that just engineered Britain’s exit from the EU – because in theory the two parties should be natural allies, and now they’re marked enemies.

The EPP are centre-right, like the Tories, but the Tories flounced out of the EPP in 2009 because David Cameron, who the EPP deride as a political coward for not standing up to the Eurosceptics, thought the EPP was too pro-European (or at least his backbench MPs did).

Britain is the 28th kid in a very large family, throwing a tantrum during the school run, and Mama Brussels simply doesn't have time for it.

Good news, then, that the chief negotiator for the Commission will be Michel Barnier – the vice president of the European People’s Party. So insistent is he that Britain must be made to sweat that he has demanded the negotiations be conducted in French.

Then you have the idea we’re entering into any normal trade negotiation where normal rules apply. In a rare moment of clarity, Brexit Secretary and hardliner Eurosceptic David Davis acknowledged at the Conservative Party conference earlier this month that the EU’s understanding of the bloc and the British understanding of it remain fundamentally different.

“We need to appreciate and respect what the European Union means to them,” he said. “They view it through the prism of their own history – sadly a history often of invasion and occupation, dictatorship and domination.”

The prism of sovereignty

Britain, on the other hand, has always and will always see the EU as a matter of money and trade alone – not a matter of stability, national security or essential freedoms.

The Poles, perhaps the most ardently nationalist, pro-sovereignty, anti-immigration, and certainly the most pro-EU public you will find, are exemplary.

They, if anyone in Europe, understand the meaning of losing sovereignty. It actually happened to them, many, many times, as their sovereignty was repeatedly subsumed by their neighbours.

And yet still the Polish public overwhelmingly love this supposed juggernaut of sovereignty stripping – the EU.

I was in Poland during and after the referendum; and Brexit continues, as it did then, to dominate the Polish news agenda. It does so because for many Poles, Brexit possibly means the EU, at some point, falling apart.

And guess who is also playing a key part in the Brexit negotiations. Donald Tusk, president of the European Council and yes, a Pole – a former prime minister, no less.

Worse still, guess which party Tusk hails from? You guessed it – the European People’s Party.

OPINION: After David Cameron we are left only with mistakes

Politicians living next to Vladimir Putin or on the borders of the Middle East and North Africa currently feel under immense pressure.

The refugee crisis is collapsing the Balkans, Greece and Italy into chaos, the Syrian civil war could last for years to come, and the level of resentment that the UK generated by creating another problem for the EU elite, at a time of such massive crisis, cannot be underestimated.

Britain is the 28th kid in a very large family, throwing a tantrum during the school run, and Mama Brussels simply doesn’t have time for it.

Her Brexit speech was pointedly timetabled for the very end of dinner, and was met with stony silence. The EPP bigwig and European Commission President Jean-Claude Junker threw his hands in the air and muttered “pfft”, when asked how May had performed.

May insisted before her departure that she wanted Britain to “play a full role until we leave”, but 27 member states will now meet without Britain in Malta next year.

Marching orders are being given. Dispatch Britain as quickly as possible. Give them a bloody nose so nobody else thinks they can get a better deal out than in, and move on to dealing with the more serious issues.

Britain might as well end the national debate which is consuming the airwaves about whether we’re going to get a “hard” or “soft” Brexit. As Donald Tusk himself put it when he visited May; “it’s either hard Brexit … or no Brexit.” 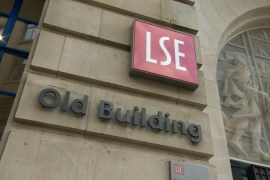 The Foreign Office has told the LSE that non-UK academics should not do advisory work for the government on Brexit. 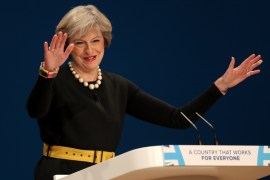