When the Arab Spring swept through the Middle East five years ago, progress seemed inevitable and the contagion unstoppable. But then everything started to regress and now looks destined to go from bad to worse unless we identify why and how something so divine turned so ugly so fast.

Unfortunately, the most peddled answers one hears nowadays are also the most flawed.

In the Middle East, the conspiracy theorists blame the West’s intervention and manipulation of a misguided Arab youth who bought into its subversive ideas. And in the West, smug, told-you-so cynics repeat the same derisive cliches: the Arabs are hopeless; Islam is incompatible with democracy.

Some see the rise of the Islamic State of Iraq and the Levant group (ISIL) as proof of their scepticism of the democratic promise of the Arab Spring, and advocate support for Arab autocracy, proclaiming its security apparatuses the essential bulwark against chaos.

But that is a misreading of history.

The Arab Spring was an authentic and potent response to United States neoconservative attempts to spread democracy on the back of US tanks. It showed the world that millions of Arabs, Christian and Muslim, are just as passionate as citizens of Western democracies are about the universal values of human rights, justice and political freedom. To claim otherwise is either ignorant, or racist.

READ MORE: The Roundabout Revolutions: When Tahrir goes to Gwangju

If the young leaders of the Arab rebellion are at fault, it’s not because they dared to act, but rather because they didn’t act vigorously enough. For example, they failed to turn their slogans into political programmes and form political parties to rally the support of the wider public around their democratic vision.

If the young leaders of the Arab rebellion are at fault, it's not because they dared to act, but rather because they didn't act vigorously enough.

Predictably, given the absence of a civil society space for opposition movements, when the grip of autocracy was breached, older and better-organised Islamist groups rushed to fill the void. Those groups failed to heed the sentiment expressed in the streets and squares of the Arab world.

Instead of embracing pluralism and strengthening the democratic process, the Islamists were seen as seeking to monopolise power, albeit through the ballot box.

But the fallout from the Islamist-secular divide could have been contained peacefully, as in Tunisia, if only the ancien regime had accepted the principle of peaceful transition towards a more just society and representative democracy. It didn’t. As expected.

How it got so ugly

The old political, business and military elites – the so-called “deep state” – worked to subvert the democratic process and resorted to extreme violence in the cases of Syria, Libya, Yemen and Egypt, in the belief that they could bludgeon their way back to stability.

When that didn’t work, they redefined their oppression, as a much-needed anti-terror campaign.

And ISIL was more than happy to provide the alibi for dictators to continue to repress their people. If ISIL didn’t exist, it would have been necessary to invent it. But was that really the case?

Meanwhile, the region continues to unravel at terrible cost of life and property because defenders of the status quo have failed to grasp the historic transformation their repression has helped to trigger.

What began as peaceful calls for freedom, justice and jobs became revolutionary challenges that exposed the rottenness of the post-colonial regional order of Arab states.

The failure of the Arab Spring to transform those states peacefully has quickened the erosion of the entire system of the post-colonial nation state. Not necessarily a bad thing if it led to region-wide Arab unity, but in reality, it is creating new rifts within the colonial partitions.

READ MORE: Can the Arab revolutions survive Syria and Egypt?

By eschewing a relatively painless path towards political change, the security states put the region on a course towards a more painful transition. Chaos and insecurity have pushed people to seek refuge in tribal, ethnic and other primordial affiliations that undermine state legitimacy and threaten to reshape the entire region. It’s a process that started in Iraq after the US invasion of the country in 2003.

Powers beyond the pale

The region is now in the throes of what Condoleezza Rice, George Bush’s secretary of state, memorably (if mistakenly at the time) called “the birth pangs of a new Middle East”.

And there is a lot of blame to go around for the region’s descent into a series of interlocking ethnic and sectarian proxy wars. Especially those players with high stakes and few scruples, such as those ruling in Moscow and Tehran.

But unlike Western powers, Russia and Iran never claimed to support or stand for the values and aspiration of the Arab Spring. Indeed, they have been consistently dead set against them.

However, US President Barack Obama, who has been marked by his predecessor’s military blunders and preoccupied by negotiations with Iran over its nuclear programme, has insisted that no good can come of intervening in distant civil wars. And while he may be right, there is much the West could have done to stop the deterioration and reduce the pain.

For example, the US could have acted early and decisively against ISIL before it exploited the chaos and entrenched itself in vast areas of Iraq and Syria, by providing sufficient support to the secular or so-called moderate opposition.

He should have at least spoken forcefully in defence of the oppressed Egyptian youth, and helped to impose a no-fly zone to protect the Syrian people from the daily barrel bombings.

As the US and others held back, the situation deteriorated dangerously, the death toll rose and the prospects for a decent outcome dimmed.

Obama's hesitation on Syria was underscored by the lesson he said he had learned from the Libya debacle ...

Obama’s hesitation on Syria was underscored by the lesson he said he had learned from the Libya debacle – that toppling a dictator without extensive, patient involvement in managing the aftermath was a recipe for an even more dangerous civil war.

After five years of turmoil and bloodshed and 50 years of dictatorships, one might not expect the West to act decisively in the spirit of the Arab Spring, but at least to refrain from selling expensive military hardware, as the US and France have done to the likes of the bankrupt Egyptian regime.

But the US and Russia are not paying attention.

Neither Egyptian General Abdel Fattah el-Sisi, nor any of the regional dictators such as Syria’s Assad are able to restore stability or security, let alone bring prosperity to their peoples.

They have violently suppressed opposition with total impunity, but have failed to tame the spirit of change.

When Assad and Sisi held elections, the turnout figures show that Syrians and Egyptians voted with their feet. Their fall is only a matter of time, but the substitute or the alternative, it seems, will be transitional at best.

The Arab world is going through an historic transformation that is certain to take more time and many lives, alas. But judging from other similar experiences in other areas and eras, history is not on the side of violent tyrannies of the Arab region. 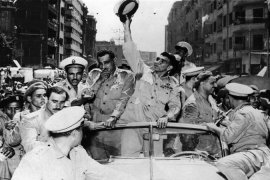 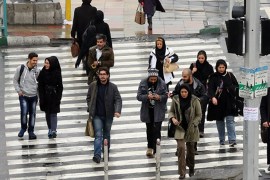 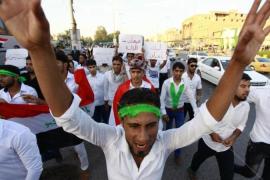 The problems of the people in the Middle East are rooted in an overindulgence in identity.