The death of Princess Ashraf Pahlavi at the age of 96 on Thursday marks the end of an era in more than one sense.

The now standard assessment of the twin sister of the late Mohammad Reza Shah Pahlavi, that she “was a close ally and staunch defender of her brother … throughout his reign”, and that “she also played a crucial role in the British-and American-inspired military coup that overthrew Prime Minister Mohammed Mosaddegh in 1953 and restored her brother to the throne” will be a fair summation of who she was and what she represented.

That assessment, however, will fall much short of the fictive power of history that has always underlined any attempt at judicious historiography.

Ashraf Pahlavi outlived the Pahlavi dynasty (1926-1979), which her father founded and her twin brother ended. She has now joined a history that harbours a proclivity far more acutely fictive than factual. She was and she died a phenomenon that prevents anyone ever reaching a consensus about her character.

Her supporters will celebrate her as a champion of women’s rights, a patron of the arts, and a beacon of social modernity, while her detractors will dismiss her as a monstrous power monger who played a key role in reinstalling her brother’s dictatorial reign and benefited lucratively under his tyrannical rule.

She therefore outlived not just the Pahlavi dynasty. She outlived the time in which she could have been assessed as a human being with faults and virtues mixed. No one will ever be able to tell one from the other in her case any more, for on the fertile fusion of the two is where her nation now dwells and dreams of its future.

She and her dynasty ruled with an iron fist when they could, and unceremoniously fled to exile to save their lives when a nation rose in revolt.

A more realistic historiography of the Pahlavis is now emerging, though much tinted by the anger against the Islamic Republic that succeeded that monarchy.

But there is also the sentiment of a younger generation that has no active memory of the Pahlavi period, and it is for them that Ashraf Pahlavi now most readily joins the realm of merciful fiction.

Ashraf Pahlavi has therefore transgressed the realm of history and entered the domain of fiction, of literature, of operatic drama.

So was she Cathy Ames of John Steinbeck’s East of Eden, the Lady Macbeth of Shakespeare, or simply Ashraf Pahlavi, a fictive character of her own type and prototype?

As the serious historians of the Pahlavi period may devote a few paragraphs or pages to Ashraf Pahlavi, and as the more dilettante hagiographers and detractors may pen voluminous gibberish in one banal direction or precisely its opposite, in the fertile imagination of her nation, Ashraf Pahlavi has joined the dramatic pantheon of villains and heroes, goblins and gremlins, genies and fairies, legends and fables, all the allegorical lore that gather momentum to make a people a nation.

READ MORE: Egypt: The return of the King?

The fate of nations has never been at the mercy or tyranny of boring historians and paid and bought for court chroniclers. Ferdowsi’s Shahnameh is an infinitely more reliable narrative of the soul of Iran as a nation than any ancient or current claim to historical accuracy.

As a princess, that is where Ashraf Pahlavi is headed: towards the pantheon of a nation’s collective memory, right next to Rudabeh, Farangis, Tahmineh, Gordafarid, or perhaps most appropriately, Sudabeh. None of those characters are flat or banal – all are bold and multidimensional.

No royal or presidential historian, no official obituary or hostile detractor will ever match the gentle creativity of a nation’s soul that plays with the soft clay of their rulers’ memory to fit them right where they belong – where they can humbly give back to their nation the best they had in them and then take back to their maker the worst of which they were capable.

Rest in Peace Princess Ashraf Pahlavi. May your nation’s memory be merciful to your soul. 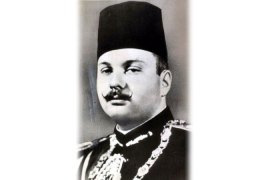 Egypt: The return of the King?