Gaza’s Freedom Flotilla has come and gone with hardly a ripple. On June 29, the Swedish vessel Marianne surrendered, all but without incident, to Israeli naval forces somewhere in the Mediterranean, far from the intended destination along the Gaza shore. The lead vessel was towed without ceremony to the Israeli port of Ashdod and foreign voyagers, who included  an ex-Tunisian president, and a serving member of Israel’s Knesset, were summarily deported.

It is far more difficult these days, when the Middle East is an inferno, producing refugees in the millions, to draw attention to Gaza’s miseries than it was five years ago when the Mavi Marmara captured headlines throughout the world.

Then both protagonists were bent upon confrontation – which ended badly for all concerned. The campaigners suffered 10 casualties. Israel was condemned across the globe for its military assault on the flotilla and the deaths that resulted.

But the oft-forgotten souls at the centre of this drama, the people of Gaza, continued to suffer. The punishing maritime blockade maintained by Israel remains in place, and the siege of Gaza, for the last two years joined by Egypt under President Abdel Fattah el-Sisi, continues to deprive 2 million Palestinians of the basic instruments of  a normal livelihood – the elementary ability to trade with the world beyond its stifling borders.

Today the Mavi Marmara sits in forlorn isolation and neglect along the shore of the Golden Horn. Forgotten by all concerned, it stands as a poignant metaphor for Gazans who, try as they might, have yet to move the conscience of a world that has grown accustomed to its own deafening indifference.

The latest campaigners trying to call attention to Gaza’s engineered descent into poverty and hopelessness have learned form past mistakes. This time the objectives of all parties were met, excepting of course the long-suffering Palestinians in Gaza. Those aboard the Marianne were content, in a modest way, to remind a distracted world that the siege of Gaza must end.

They never believed that they would break the siege, or that they would elude or outgun the Israeli navy. Nor were they poised for violent confrontation to make their point. Indeed the three accompanying vessels simply turned around and sailed away when the lead vessel was intercepted.

Israel has suffered little of the opprobrium and outrage that followed its armed assault on the Mavi Marmara, while maintaining its long-standing blockade on vessels seeking to enter the waters of Palestine.

The effort to win hearts and minds, however well-intended, has exhausted itself. It is now time – long overdue – for the politicians to find practical solutions to Gaza’s economic misery.

The flotilla has shown the way to begin Gaza’s economic rehabilitation and the restoration of Palestine’s trading links with the world. A seaport in Gaza will offer “win-win” solutions for all parties.

Palestine needs a maritime gateway, both as a critical building block for statehood and as an engine of economic development. The international economic system today is focused on a competitive race to construct such gateways. From Djibouti to Los Angeles, the drive to claim space for maritime commerce has exploded.

Gaza, historically a Mediterranean gateway to the Arab east, is well-placed to once again exploit its natural geographic advantages.

The international community and other stakeholders now understand that Gaza needs an end to draconian restrictions on trade and commerce via borders open to the outside world that function according to internationally acceptable standards and practices – establishing a trade regime that will enable long-suffering Gazans to go back to work.

One month ago, German Foreign Minister Frank-Walter Steinmeier led a high-powered delegation including German business people, on an unprecedented visit to Gaza.

“The troubled situation in Gaza demands of us to think about concrete steps to improve daily life there – without which, I am afraid, the situation is escalating,” he said.

Tony Blair, who shunned Hamas during his long, ineffective tenure as the Quartet’s representative, has reportedly met Hamas leader Khaled Meshaal as part of stepped-up efforts by Israel and Hamas to establish a long-term truce, end the siege, and establish a Gaza port, in order to expand the space for Gaza’s economic rehabilitation.

There is reason to be optimistic that Israel will join if not actually lead this parade. To be sure the government of Benjamin Netanyahu continues to oppose enabling Palestinians to buy and sell according to internationally acceptable standards via Israel’s land borders with Gaza.

But it also recognises that the siege is no longer working in its favour. Increasingly, Israeli officials are looking at a seaport as a “win-win” answer to Israel’s security and Palestine’s economic needs.

Egypt’s antipathy towards Gaza these days is in some respects greater than Israel’s. It opposes Israel’s efforts of recent years, notably its 2005 “disengagement” from Gaza, to push the Strip in Egypt’s direction. Egypt insists that Israel, as an occupying power, must have the primary obligation for Gaza’s wellbeing. Any effort to end the siege – whether by land or sea – should therefore reaffirm this principle.

Turkey has a particular interest in making a material contribution to Gaza’s economy. Its maritime/land bridge via Israel to Jordan offers both security solutions to a Gaza maritime route, and demonstrates the resilience of mutual economic interests even in a politically polarised environment.

The experience of the last decade in Gaza has shown that “common space” can establish trade-related “rules of the game” between otherwise warring Palestinians and Israeli parties. The challenge and the opportunity is to broaden these understandings to facilitate the expansion of trade in order to enable Gaza to transition from a humanitarian model to a model based upon economic rehabilitation.

A new era of sovereignty in Gaza

Resistance to Israel’s assaults on the Gaza Strip may have paved the way for Gazan sovereignty. 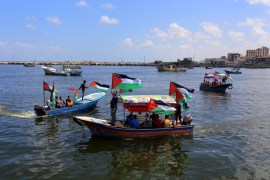