No one has yet claimed responsibility for Sunday’s multiple bombings in Gaza that targeted cars belonging to Hamas and Islamic Jihad officials. However, the most likely suspect is the Islamic State of Iraq and the Levant (ISIL).

A graffiti purportedly showing an emblem used by the group was drawn on one of the cars, and the targeted area was the scene of clashes in June between Hamas and ISIL fighters. While Hamas has not officially laid blame, one of its commanders has accused ISIL.

The explosions come less than three weeks after ISIL’s threat to “uproot” and “overrun” the “tyrants of Hamas” in Gaza, and to implement Islamic law there.

If its responsibility for Sunday’s car bombings is confirmed, it would represent the latest in a string of recent attacks by its sympathisers against Hamas in Gaza – a “jihadist challenge” to the latter’s authority that would have been unthinkable not long ago.

This year alone, there have reportedly been at least a dozen such attacks prior to the most recent, including four in May.

Hamas has tried to downplay ISIL’s presence, no doubt to show its enemies – and reassure those it governs – that it is still in control. One of its leaders, Osama Hamdan, on Sunday said: “They don’t have any real support in Gaza.”

Spokesperson Sami Abu Zuhri in May said: “There is nothing called the Islamic State” in Gaza, and the group only had “some supporters” in the territory. An interior ministry spokesman blamed “vandals” for Sunday’s bombings, and “lawbreakers” were behind explosions in May.

However, Hamas’ attempts to dismiss the ISIL threat are increasingly unconvincing with every attack. The fighters may not be anywhere near capable of taking over Gaza, and the extent to which their influence is spreading is debatable, but their presence can no longer be ignored, nor can their desire and growing ability to destabilise the territory.

Given Hamas’ intensified crackdown, the Palestinian group is aware of the threat it faces, even if it will not publicly acknowledge it.

ISIL’s presence in Gaza would not be possible without the years-long blockade of the territory by Israel and Egypt. The humanitarian disaster this has caused – which was worsened by Israel’s devastating onslaught last summer – is providing its fighters with fertile ground for recruitment among sections of the impoverished territory’s increasingly desperate population.

With neither Israel, nor Egypt willing to even loosen the blockade, the plight of Gazans will continue to worsen to the benefit of ISIL’s membership and sympathisers.

Hamas can take a measure of comfort in the fact that ISIL has made enemies of all other relevant players as well. Its recent threat against Hamas was also specifically directed at Israel and Fatah, which dominates the Palestinian Authority (PA).

ISIL affiliate Sinai Province is waging an increasingly bloody rebellion against Egypt’s government, and has fired rockets at Israel several times (most recently this month). Islamic Jihad is now also in ISIL’s crosshairs.

Likewise, none of these parties should take comfort in the challenge that Hamas faces, because an ISIL emirate in Gaza is far less palatable. Israeli officials have acknowledged this.

In May, Sami Turgeman, the commander of Israel’s forces outside Gaza who had a leading role in last year’s war, said both sides “have shared interests”, including “quiet and calm”.

“There is no substitute for Hamas as sovereign in the Strip. The substitute is the [Israeli army] and chaotic rule […] and then the security situation would be much more problematic,” he added.

That has not stopped baseless claims by Israeli and Egyptian officials that Hamas and ISIL are cooperating, nor has it stopped Israel and the PA from cracking down on Hamas in the West Bank.

Hamas has been militarily, economically, and politically weakened by the blockade, last summer’s war and the repercussions of regional crises such as Syria and the ouster of former Egyptian President Mohamed Morsi, who was sympathetic to the faction.

However, its fortunes – and hence its ability to overcome the “jihadist challenge” – may improve significantly in light of the Iran nuclear deal signed this month. This entails the lifting of wide-ranging sanctions, thus holding the prospect of greater Iranian financial and military aid to Hamas.

Bilateral ties have been on the mend since late 2013, after Tehran cut vital funding following Hamas’ refusal to side with President Bashar al-Assad against the Syrian rebels.

However, a rare meeting between top Hamas and Saudi officials just two days after the signing of the nuclear deal could signal a pre-emptive attempt by Riyadh to pry Hamas away from Tehran’s sphere of influence.

This raises the possibility of Saudi financial aid as an inducement. Relations between Hamas and Riyadh have reportedly improved since Saudi King Salman assumed the throne in January.

The “jihadist challenge” in Gaza should not be seen purely from a security perspective, because its roots lie in the humanitarian disaster caused by Israel and Egypt, and enabled by the international community’s failure to exert the necessary pressure to end the blockade.

The longer Gazans languish in what is aptly described as the world’s largest open-air prison, the easier it will be for ISIL and its ilk to establish themselves in the territory. 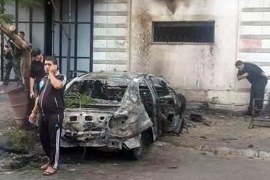 Hamas in the firing line?

Fingers point at ISIL for car bomb explosions in Gaza aimed at Hamas and the Islamic Jihad movement.