In a recent blog post for the Council on Foreign Relations (CFR), a prominent American membership organisation and think-tank, research associate Valerie Wirtschafter assesses the course of the “Cuban Renaissance” that is apparently now under way thanks to domestic reforms and the diplomatic thaw with the United States.

Based on her own mid-Renaissance visit to Cuba earlier this year, Wirtschafter remarks on some counterintuitive aspects of the expanding tourism industry on the born-again island.

“The hotel industry in particular – including the State run Hotel Nacional in Havana – seems to glorify the country’s gangster past, a violent history that partially spurred popular support for Fidel Castro’s Revolution.”

She goes on to comment on the “equally bewildering” collision of universes that transpired when celebrity socialite Paris Hilton and Castro’s son were photographed taking selfies together at a Havana cigar festival in February. The ex-Hilton hotel in Havana, opened in 1958 by the heiress’ grandfather, was one of the revolution’s first casualties when Castro commandeered it as a provisional headquarters the following year.

Nowhere does the article mention a certain – perhaps far more bewildering – fact: that Cuba’s “gangster past” and “violent history” were largely a product of US government policies and machinations by the American Mafia. In the wake of Castro’s triumph, both entities continued to help ensure that Cuba was continually beset by counter-revolutionary violence.

Historian Jack Colhoun documented the evolution of the nexus between the American state and organised crime in his exhaustively researched book “Gangsterismo: The United States, Cuba and the Mafia, 1933 to 1966”.

Cuba’s debut as what Colhoun called a “neocolony” of the US took place at the end of the 19th century when the latter intervened in the Cuban war of independence from Spain, effectively nipping the whole “independence” option in the bud and appointing itself Cuba’s new master.

The arrangement led to the US appropriation of Cuban territory for a naval base-cum-future-torture-centre at Guantanamo Bay, along with other goodies. By the mid-20th century, Colhoun wrote, Cuba had become “a virtual economic appendage” of the US, with Americans controlling many of its sugar mills, railways, and utilities, and inundating the island with US brands.

The author detailed how the establishment of a “mafia gambling colony” in Cuba starting in the 1930s was facilitated by a special relationship between North American mobsters and Fulgencio Batista, two-time Cuban ruler and one-time dictator. Batista received a cut of the profits from mafia operations and oversaw the conversion of Cuba into a “full-fledged gangster state”.

The casinos provided money-laundering opportunities for other lucrative businesses, as well. In 1946, the mafia-run Hotel Nacional hosted a summit of US underworld leaders to lay the foundations for converting the island into a heroin trafficking hub.

No beard, no revolution

When the Cuban revolution brought down the curtain on the gangster state, Colhoun explained, the mobsters regrouped with their corrupt political allies in the Cuban exile movement in the US, where they “squared the circle of gangsterismo” by plotting with the CIA to assassinate Castro.

While the White House claims that its efforts in Cuba are 'aimed at promoting the independence of the Cuban people', it is difficult to see how popular independence might be achieved via imperial meddling in a country that already offers universal access to food, shelter, medicine, and other basic rights.

The CIA also considered less terminal methods for dealing with the Cuban leader, including the administration of thallium salts – a depilatory that would make his beard fall out and, so the facile thinking went, take his power and charisma along with it.

Both the CIA and the mafia sponsored commando raids and sabotage operations in Cuba, the 1961 CIA-backed Bay of Pigs invasion being merely one of the better known efforts on account of its grandiose failure.

As Colhoun demonstrated, the US joint chiefs of staff even pondered the option of shooting down a civilian airliner and blaming Cuba to serve as a pretext for military intervention. Another proposal entailed staging a “terror campaign” against Cuban exiles, for the same purpose.

Who needs conspiracy theorists when you’ve got the US government?

Of course, the US could not come right out and say what the real problem with Cuba was: that the revolution had killed the cash cow.

In order to justify its hostile approach to the island, the US instead cast it as an existential threat – over which it was apparently worth risking nuclear armageddon.

When the two nations finally began patching things up in December of last year, the BBC News observed that, “in Cuba, limited economic reforms carried out by [President] Raul Castro have begun to relax the tight grip of the state and pique the interest of American business”.

But while the neoliberals salivate away about business prospects in Cuba, what are the prospects for the average Cuban?

For starters, as Wirtschafter acknowledged in her CFR post, Cuba’s current healthcare system “actually provides for the people”. That’s one thing that can only go downhill in the event of a US economic reconquest of the island. After all, there are loads of profits to be made off of sick people. Ditto for education.

And while the White House claims that its efforts in Cuba are “aimed at promoting the independence of the Cuban people so they do not need to rely on the Cuban state”, it is difficult to see how popular independence might be achieved via imperial meddling in a country that already offers universal access to food, shelter, medicine, and other basic rights.

Wirtschafter also noted that opening up the private sector in Cuba “has increased inequality” and that “as Cuban Americans begin to buy properties in Havana and elsewhere in the coming years, they will further exacerbate [socioeconomic] divisions.” In other words, we’ll be back to where we started.

All of this would no doubt be music to the ears of the American Mafia bosses who connived for years to terminate the Cuban revolution and its leaders.

But the gangsters aren’t the only ones deserving flak. The system of neoliberal plunder that has become the US trademark worldwide – requiring aggressive military policies to ensure that the wealth remains in the hands of a few at the expense of the rest – could just as easily be described as organised crime. 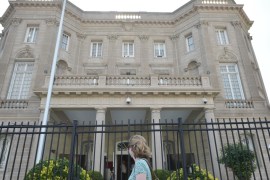 US and Cuba restore ties by opening embassies 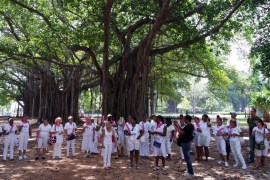 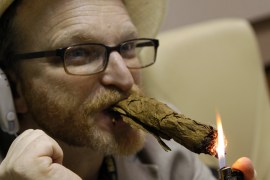 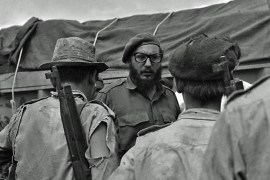 Fifty-four years after the failed CIA operation, Cubans there on Giron beach recount the botched raid.