In a world where the most famous Arabs in the West tend to be infamous, Omar Sharif was like a breath of fresh air. For a young Egyptian growing up in London, he was a welcome and flamboyant distraction from the popular stereotypes of the Arab: oil sheikh, fanatic or terrorist.

Although he was more famous for playing bridge than for acting when I was growing up, the aura of his legendary silver screen persona from the 1960s still mesmerised people. Buoyed by his off-screen playboy lifestyle, easy charm, dashing good looks and disarming honesty, Sharif remained a household name, no matter how many mediocre films he made for a quick buck to pay off his gambling debts.

Sharif’s big international break was in the universally acclaimed epic Lawrence of Arabia. Casting him as a traditional Arab tribal leader was a bizarre choice.

Omar Sharif grew up among the upper crust of cosmopolitan Alexandria and Cairo, where his modern upbringing was probably more “western” than that of many Westerners.

He attended Victoria College, a British school, where he rose to become the head boy and a prefect. The late Palestinian-American scholar and activist Edward Said also went to the same school, where he lived in terror of the older boy’s “entrenched authoritarianism” and in admiration of his acting talent on the school stage.

Meanwhile, Sharif Ali, the character Omar Sharif portrayed, was a fictional and generic amalgamation of the Arab sheikhs TE Lawrence aided during the Arab revolt, who made what is widely regarded as the most spectacular cinematic entrance in history.

Despite the romantic and exotic orientalism of Lawrence of Arabia, Omar Sharif’s great strength was that he did not allow himself to get typecast as a celluloid Arab – whether the “noble” desert Bedouin or the more common Hollywood staple, the “reel bad” Arab villain.

Omar Sharif's great strength was that he did not allow himself to get typecast as a celluloid Arab...

In his 1960s heyday, Sharif played a Spanish priest, a Yugoslav patriot fighting the Nazis and even Genghis Khan, which was panned by one critic as being “no closer to history than Omar Sharif is to being a Mongolian“.

Sharif has even played a German.

“Can you believe an Egyptian playing a German? Hitler turns in his grave at this,” Sharif once joked in an interview.

But the most famous non-Arab he portrayed has to be the dreamy and exceedingly romantic Russian Doctor Zhivago.

A polyglot who spoke five languages but didn’t have a mother tongue, Omar Sharif was not just a cinematic icon. With his ability to glide between cultures, he was also a symbol of an easy-going multiculturalism.

He was living, breathing, walking proof that there is nothing inherently irreconcilable between the Middle East and the West, that the cultural divergence within them is greater than that between them.

Sharif, the first Egyptian and Arab to conquer Hollywood, not only challenged western cliches, he also undermined stereotypes in Egypt and the Arab world, and stood as a symbol of a vanishing cosmopolitan era of greater mobility and tolerance.

Born Michel Chalhoub, he was not just the son of Egypt but also of the Levant. His Lebanon-born father was a well-to-do Greek Catholic merchant who settled in Alexandria, while his mother was of Syrian-Lebanese extraction.

Upon embarking on his film career, Chalhoub changed his name to Omar Sharif, partly because his father was ashamed of his career choice and partly to give himself an easier name for Egyptian audiences to recall.

He soon ostensibly adopted the religion to match his new name when he fell in love with Egyptian silver screen legend Faten Hamama on the set of his first film, the classic Sira’ Fil Wadi (Struggle in the Valley),and converted to marry her.

And like Lawrence of Arabia, Sharif’s first film in Egypt – the Arab Hollywood – was a mega-hit, though his casting in it also diverged from his real-life circumstances.

In Struggle in the Valley, Sharif plays the son of a farmer caught in a passionate love affair symbolising the class struggle. In reality, Sharif grew up in a bourgeois household frequented by King Farouk, who played cards with his mother.

Lover of the good life

But Omar Sharif never became involved in overtly political art nor activism. Perhaps as a function of his complex and varied background, upbringing and career, he never sought to be a symbol for or representative of anyone.

He was a lover of the good life who was prone to overindulgence, especially when it came to his many affairs and to gambling. The side effect of this was that he lost many of the dearest things in his life, including his marriage to Hamama, and led a rootless existence for long years living out of hotel rooms around the world.

“I’ve been forced to live like a Bedouin,” he once said.

Sharif ... stood as a symbol of a vanishing cosmopolitan era of greater mobility and tolerance.

Sharif was also unapologetic about his multiple cultural influences and lifestyle choices, and never tried to fit into a particular cultural template. He didn’t seek assimilation in the West nor did he strive for a return to Arab authenticity when he came back to Egypt.

“I am very western in culture and very eastern in temperament,” he once described.

This uncompromising individualism sometimes landed him in hot water, such as when he became romantically involved with Jewish-American superstar Barbra Streisand, known for her staunch support of Israel.

Sharif’s response to allegations of treachery levelled against him in the Arab press was disarmingly simple and straightforward: “Neither in my professional nor in my private life do I ask a girl her nationality or her religion before I kiss her.”

Cinematically, Sharif’s silver years were better than the dry middle decades of his career, though, in his self-effacing honesty, he did not believe that age brought with it wisdom.

He produced a number of Western and Arab films of worth, including The 13th Warrior, Monsieur Ibrahim et les fleurs du Coran, al-Aragouz (The Puppet Show), and al-Muwatin Masri (The Citizen is Egyptian).

It is a shame that he will no longer produce films of such calibre. But given his hit-and-miss career and his uneven acting abilities, it will not be Omar Sharif the artist that the world will miss the most. It is Omar Sharif, the person.

In these times of growing polarisation, hardening cultural identities, the mindless quest for “authenticity” and fake civilisational clashes, we desperately need an Omar Sharif to glide effortlessly and elegantly through the allegedly impassable cultural barriers which supposedly separate us. 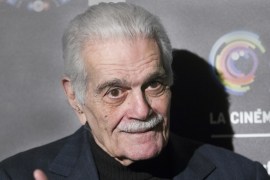 The cinematic icon, who starred in classics “Lawrence of Arabia” and “Doctor Zhivago”, died of a heart attack in Cairo. 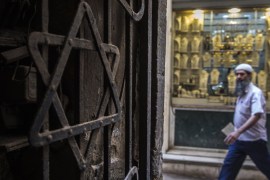 Controversial TV series set in Cairo’s old Jewish Quarter is not a missive to Israel but an ode to pluralism.