One after another, Arab states today are losing their national sovereignty – the ability to make decisions in an independent and autonomous fashion without undue influence by foreigners.

Yasser Arafat called this “the power of independent Palestinian decision-making” – and his generation of secular nationalists from Algiers to Cairo, Damascus and Baghdad struggled with uneven success to chart an independent national destiny.

What Arafat’s generation achieved at such great cost is now at grave risk of being completely squandered in an arc reaching from Tripoli to Baghdad. But an opportunity has emerged in the Gaza Strip, of all places, to achieve in at least a part of Palestine, the sovereign power that has been denied Palestinians throughout their modern history.

A proto-state already exists in the Gaza Strip, with objective attributes of sovereignty the Ramallah-based Mahmoud Abbas can only dream about.

Gaza is a single, contiguous territory with de facto borders, recognised, if not always respected, by friend and foe alike. There are no permanently stationed foreign occupiers and, most importantly, no civilian Israeli settlements.

In the Gaza Strip the rules of war, not the laws of occupation prevail. Palestine, for the first time in its history, has its own army and security forces that represent “one gun, one authority” that fights and survives and that has won Israel’s grudging respect as a formidable enemy. Imagine a West Bank with similar attributes. Indeed imagine is all one can do.

This Palestine army in Gaza has convinced Israel in the old fashioned way that the destruction of a Palestinian power in the strip – and its reoccupation by Israel or the installation of a puppet Palestinian government by Israeli tanks – entails costs too high to pay.

Israel aspires not simply to control Palestine, but to pre-empt its ability to establish a sovereign state. The West Bank is firmly in its grip, so much so that not a few Palestinians, including Abbas himself, wonder aloud why Palestinians would be better off simply handing the keys of the West Bank back to Israel.

The Gaza model is different. No one there is suggesting that its governing and security institutions fold their tents.

It is all too true that Ariel Sharon was the handmaiden of this development, and that Hamas understood its possibilities more clearly than others – and for many, this is enough to damn the entire enterprise.

But in doing so Israel is granted powers beyond its capabilities. It is not only senseless but also historically inaccurate to suggest that Palestinians are incapable of turning to their advantage a policy that Israel has executed for its own purposes. Take for one example, Israel’s 1975 decision to hold elections in the West Bank – an act of hubris that led to the PLO’s first victory there.

The other major concern about Gaza is that an expansion of Gaza’s sovereignty and economic revival under Hamas’ leadership would come at Palestine’s expense. Such a development, it is feared, would do just what Sharon intended – irrevocably split the destinies of the West Bank and Gaza.

Arafat’s heirs in Fatah are not the only ones who voice the concern that “Gaza first” will be “Gaza last”. In a recent conversation, Musa abu Marzouk discussed the challenge of retaining the principle of unity in the face of the current reality of separation.

Certainly, no one will argue that the current situation, and the Oslo rules that nominally declared the unity of the West Bank and Gaza – have enhanced Palestine’s sovereign unity.

Hamas is currently the instrument of this process but in historical terms it is results that are important – the Israelis certainly don’t care what party rules Gaza. As Yitzhak Shamir once explained: “The sea is the same sea, and the Arabs are the same Arabs.” The key issue is that a new post-Oslo chapter in Palestinian history is being written, one that holds the promise of creating a sovereign Palestinian safe haven on at least part of historic Palestine for the first time in modern history.

It may appear unseemly, amid the engineered deprivation that defines Gaza’s 1.8 million inhabitants these days, to speak of the advantages Gaza now boasts. But by disengaging Gaza from the moribund Oslo agreement – a decision forced by unyielding popular opposition to Israeli rule – Sharon unleashed a process that has created the potential for Palestine to emerge as an agent rather than an object of its own national destiny.

Palestinians, particularly those in Fatah, have been paralysed by the belief that expanding the powers of Gaza will prejudice the chances of maintaining the unity of West Bank and Gaza. But the idea of the unity of Palestine has proven stronger than any territorial reality that has existed in the last six decades.

There is no doubt that independence for the Gaza Strip and the West Bank is the sine qua non of any lasting agreement. But it is also the case that the example of Gaza wielding some power to act in a sovereign manner and interacting with the international community offers a more inspirational and instructive example than the debilitating status quo on display in the West Bank, a predicament that no party has challenged effectively.

Israel and Hamas are now discussing implementation of understandings about Gaza’s future, reached after last summer’s war – at the centre of which are a tahdiya (period of calm) of long duration and the creation of a seaport in Gaza. This package reflects the increasingly compatible interests of both parties – an agreed upon period of quiet that provides security for both Israelis and Palestinians, that ends the siege and creates a foundation for Gaza’s much-needed economic revival.

A seaport has long been a strategic national and economic objective of leaders in Gaza. Unlike Palestine’s land borders with Egypt and Israel, a seaport offers the real prospect of a gateway to the world far more independent of the suffocating power of neighbours determined to isolate and impoverish it. 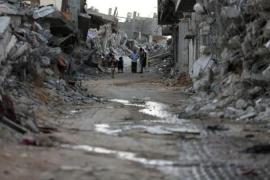 Gaza and the ‘crime of crimes’

Russell Tribunal on Palestine finds that Gaza is on the brink of a genocidal apartheid.