For decades, humanity has kept quiet over the evils happening in Palmyra. For while the city is known throughout the world for its ancient ruins, less well known is the similarly decrepit hellhole of a prison in the city – home to tens of thousands of desperate souls left to rot in the desert.

Their agonies failed to move human rights activists. But even having met the prisoners of Palmyra’s dark jail, words fail me in trying to illustrate the psychological terror I witnessed behind those walls.

The Assads defined crime as per their convenience. The finest minds, the gutsiest soldiers and the sharpest critics were incarcerated for their God-given talents. The world has for centuries admired the doomed architects of what now lays in ruins, but remained apathetic about the living beings decaying in the modern-day prison.

We know the priorities of this corrupt world. It sounds so politically incorrect to mention the plight of Assad’s prisoners, while a top UNESCO heritage site faces likely destruction. Why should we care about the desperation of dissidents when there are rocks and rubble that need saving?

It’s nothing but a myth that there was no threat to the ruins before the ISIL takeover. A survey of Syrians conducted by the opposition’s Orient media house concluded that both the regime and ISIL pose similar threats to the heritage site – at least in the minds of many Syrians. Some 38 percent even responded that the Damascus regime was a bigger threat than ISIL, while 12 percent thought the opposite.

Today’s civilised and cyberised world prefers to overlook the discomforting images of living beings at the hands of a totalitarian regime.

Al-Quqaha, by far the best novel-cum-autobiography by a Syrian, depicts the years of the writer’s youth spent behind the impenetrable walls of Palmyra. Scores of Arab inmates spent no fewer than 15 years here. It is estimated that no fewer than 30,000 inmates have died since 1980.

In the words of UNESCO, Palmyra sits “at the crossroads of several civilisations” – but the UN High Commissioner for Human Rights has forgotten to tell the world of the notoriously inhumane torture cells and incarcerations there.

Only after ISIL took over Palmyra, as Assad’s men tactically retreated, would the world wake up to the danger to this ancient heritage. In the shadow of the majestic relics, many people disappeared and died without a trace. Even if a family knew for certain its loved ones were being held in Palmyra, the sadistic authorities never made a meeting possible.

While every Syrian is eager preserve and protect the remnants of the caravan city, they are stunned at the lack of international commotion over everyday killings – from chlorine attacks to barrel bombings. Media reports suggest that the Assad regime used chlorine gas against Syrians 35 times within two months. US President Barack Obama, however, has still failed to confirm or condemn even one such massacre.

Thousands of Syrians have been consumed by the ocean waves while fleeing for dear life. There has been no one-minute silence to commemorate their sacrifice. After at least 300,000 deaths, and while more than half the nation has been forced from their homes and live as refugees or Internally Displaced Persons, it is the fear of an Alawite massacre that is making the headlines, as Jaish al-Fateh advances.

Assad’s loyal troops and militias did not retreat from Palmyra in haste. They took thousands of prisoners from the country’s most notorious jail along with them.

This was not done merely to deny ISIL access to the enormous manpower, but also to hide the crimes of Baathist rule. The Syrian junta knew the world wouldn’t talk about the nameless and countless inmates of the jail. They were right.

The Assad regime got away with its heinous crimes as the world turned to Twitter to save the centuries-old ruins.

ISIL may not exercise restraint here. Palmyra is likely to be annihilated, like much of the heritage in areas of Iraq the group controls. The loss of this sacred heritage has not been occurring overnight – a daily holocaust in Syria over the past five years has not been enough to shake the world’s conscience from its slumber.

With memories of Bosnia and Kosovo still fresh in our minds, world leaders prefer silence. UNESCO and its donors may still, miraculously, save Palmyra – but it will do so while letting a proud nation drown in its own blood and romanticism.

Ahmad Zaidan is Al Jazeera’s Islamabad bureau chief. He is a Syrian journalist who has covered the war in Syria since 2011. 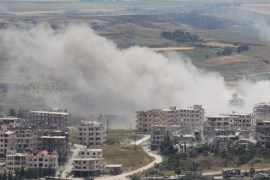 To save Syria from descending into an all-out civil war, now is the time to manage the transition process.

Al Jazeera’s A. Zaidan: I am a journalist not terrorist