US Deputy Secretary of State Tony Blinken’s current whistle-stop tour of Middle East capitals has one and only one objective – to reaffirm continuing US security support for pro-US Arab Sunni regimes. This was the message Blinken carried from Washington – first to Beirut and then to Riyadh on his first visit to the region since his appointment, and only days after the landmark agreement between Tehran and the P5+1.

Blinken’s visit was conveniently scheduled to coincide with the diplomatic triumph in Lausanne orchestrated by Blinken’s boss, Secretary of State John Kerry. His mission – he will also visit Abu Dhabi on Wednesday, Muscat on Thursday, and Tunis on Friday – is meant as a counterpoint to Lausanne. And it is no less complicated.

The newly minted US diplomat has to reassure sceptical Arab allies in the Gulf and Tunisia that the US “has their back” in a new, tumultuous Middle East framed by Washington’s evolving rapprochement with Iran and the unprecedented weakness of Arab states imperilled by the Arab Spring.

The hotel rooms in Lausanne were hardly empty before Blinken headed east to sell the deal around the Gulf. New rules of the game are being formulated – with the nuclear agreement with Tehran at the centre.

But the news from Switzerland is not the only sign of the countless challenges ahead as the region seeks a new kind of strategic equilibrium.

The Saudi decision to intervene militarily with an unprecedented air campaign against a motley of militarily effective coalition that has forced the government of President Abd-Rabbu Mansour Hadi into exile, places Saudi Arabia at the centre of international attention. And it offers clear evidence that Saudi Arabia under its new leadership will not easily defer to antagonists or even erstwhile friends in the era now dawning.

King Salman bin Abdulaziz al-Saud, like Egyptian President Abdel Fattah el-Sisi, has indeed learned from the failure a decade ago to pre-empt Washington’s campaign against Saddam Hussein. The Saudi war, still limited to an air campaign and naval shelling and blockade of Yemeni ports, in dramatic fashion has forced Washington to face the issue of Saudi national security, and challenged the Obama administration to demonstrate its support for the unprecedented Saudi decision to intervene. In so doing, it sets a defining marker for an uncertain future.

It is not Blinken’s job to make news. The secretary of state and the president, who has taken to the airwaves to defend his deal with the mullahs, are doing more than their fair share already. But the Saudi campaign in Yemen presents a challenge and an opportunity that Washington can ill afford to ignore.

Washington could hardly fail to back the Saudi effort at a time when doubts of Washington's commitment to Arab interests among leaders in the Gulf and Egypt have never been greater.

Washington could hardly fail to back the Saudi effort at a time when doubts of Washington’s commitment to Arab interests among leaders in the Gulf and Egypt have never been greater. Second-guessing the Saudi strategy will surely come, but for the moment at least, the path of least resistance is to stand and applaud.

Blinken took advantage of his presence in the Saudi capital to reaffirm the value of the Washington-Riyadh security axis. Notwithstanding dire warnings from the Red Cross of a “catastrophic” situation in Aden, where loyalist forces backed by shelling by Saudi-led warships are battling advancing rebels, Blinken announced that the United States is speeding up arms supplies to replenish arsenals reduced by the fighting, and expanding intelligence sharing with the Saudi-led alliance.

“Saudi Arabia is sending a strong message to the Houthis and their allies that they cannot overrun Yemen by force,” he told reporters in Riyadh.

Blinken was reaffirming existing policies rather than announcing new ones. But it is clear that in the aftermath of Lausanne, and more broadly, in the wake of Washington’s decade-long campaign against Sunni power in Iraq, a campaign which Saudi leaders are not convinced has ended, Washington sees value in cheerleading Riyadh’s effort. It is prepared to replenish stockpiles depleted by the war, to offer operational support (refueling) of the air campaign and intelligence, as well as to lend its diplomatic hand to UN inaction.

There is a steep price to pay for such a strategy. For years Washington’s policy in Yemen was defined by counterterror strikes against al-Qaeda in the Arabian Peninsula (AQAP). Only last fall, Obama declared this campaign a grand success, along with a similar policy in Somalia.

In recent days, however, this effort has collapsed. AQAP cadre have taken advantage of the anarchy fomented in part by the Saudi-led strikes to release imprisoned brothers, and to loot banks of millions.

But as always, the most grievous cost is paid by innocents. The spokeswoman for the International Committee of the Red Cross in Yemen, Marie Claire Feghali, said the humanitarian situation across the country was “very difficult … [with] naval, air and ground routes cut off”.

She described the situation in Aden as “catastrophic to say the least”.

“The war in Aden is on every street, in every corner… Many are unable to escape,” she said.

Such costs have become perhaps the defining feature of the conflicts now raging from Tikrit to Sanaa. But in Cairo, where Washington has just resumed major arms deliveries; Beirut, where Blinken trumpeted Washington’s support for the Lebanese Armed Forces; as in Riyadh, a vibrant arms pipeline linking Washington is at the heart of the new Middle East now being born. 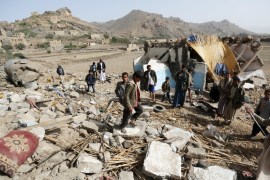 US steps up arms for Saudi campaign in Yemen

US official says Saudi Arabia sending a “strong message to the Houthis that they cannot overrun Yemen by force”. 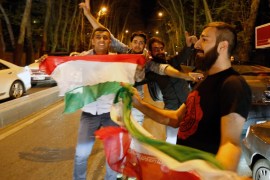