Out with the old in with the new, so it seems with the latest move in Saudi Arabia’s cabinet that has set gossip flying and rumours swirling as to the intrigues of this most Byzantine of ruling elites.

“Riyadhology” is an imprecise science, and the first rule of analysing politics in the kingdom is to understand that outside of the ruling elite, there is almost no real knowledge as to how these changes occurred, and to what extent personal intrigue trumped the need for meritocratic reform. In short, don’t believe the rumours, they are rarely true, and almost impossible to prove.

But make no mistake, this latest cabinet shuffle is important and will have big impacts on the kingdom both domestically and internationally. The crown prince, Mugrin bin Abdulaziz al-Saud has been relieved of his duties, and his position is taken by a grandson of Ibn Saud, Prince Mohammed bin Nayed bin Abdulaziz al-Saud.

Into the post of second deputy prime minister steps King Salman’s son, Defence Minister Mohammed bin Salman. Additionally, the long standing Foreign Minister Saud al-Faisal has stepped down from his post to be replaced by the Saudi Ambassador to Washington, Adel al-Jubeir.

Salman took the kingdom’s throne in January promising stability and continuity on the country’s established course, both internally and externally. In reality, it has been anything but stable, and almost immediately the new king set about removing nearly all the sons of the previous king from their posts.

The most notable exception being Miteb bin Abdullah, whose place in power is assured by the allegiance of the kingdom’s National Guard whose core officer ranks are loyal to him.

Therefore the removal of Mugrin, a stalwart ally of King Abdullah, and likely guarantor of his legacy just three months into Salman’s tenure is not altogether surprising. Although a friendly and competent man, generally liked by all branches of the Saudi family, Mugrin never quite possessed the presence and stature of a king in waiting. It was always difficult to imagine him in anything more than a prince regent role, who, as a trusted favourite of King Abdullah, was put in place to oversee the transition of power to a younger generation of princes, giving time for the kingdom’s subjects to adjust to changes.

King Salman has torn up Abdullah’s playbook, and moved the kingdom back towards what might be considered a more natural footing in which the prince long groomed for kingship, Mohammed bin Nayef, assumes his rightful place in the chain of command. However, the ascension of his son to second deputy prime minister (long seen as the position for second in line to the throne) might raise a few eyebrows.

Mohammed bin Salman’s meteoric rise under the stewardship of his father is still quite difficult to absorb for most kingdom watchers, who have gotten used to slow gradual change as being the modus operandi in Saudi political life.

At just 34 years of age, the young defence minister is now in the hot seat to one day become king, without yet having proven himself to the family over a long period of time, which for any aspiring king is vital.

Much has been made of the young prince’s stewardship over a very challenging conflict in Yemen, which has not quite achieved the strategic aims that Riyadh had hoped. Salman has placed his faith in his son to deliver on perhaps the toughest foreign policy file that exists in Riyadh at present, and Prince Mohammed has not yet delivered the goods.

Herein lies the problem. Salman’s decision to remove Mugrin has bypassed structures put in place to ensure smooth transitions marked by consensus among the top princes. If the king wants to ensure his son’s rise, the ease with which he removed the standing crown prince does not bode well for the future.

Should Salman pass away before his son has a chance to bed into his post (even if he becomes crown prince) then there is nothing to stop the family from moving to eliminate Salman’s influence from government in similar fashion. In this sense, the king has set a precedent that may actually harm his son’s future career as much as aiding it.

Regardless of the potential for internal problems, there is little doubt that the injection of fresh blood into the executive rungs of the Saudi system was also enacted with external relationships in mind, and the Saudi reshuffle has gone down well in the US and the UK.

Both countries have built long standing relationships with Mohammed bin Nayef and it is no secret that government officials in the West rate his competency and diligence highly. Alongside Jubeir with his media friendly personality and popularity in the US, the Saudis will look to reinvigorate their flagging influence in Washington DC, and strengthen their line into Western capitals.

To this end, Saudi disappointment and anger at the West over regional policy issues looks to have been tempered by what can be seen as a pro-Western combination of appointments that will clearly benefit Saudi bilateral relationships in the future.

As Saudi Arabia moves to assertively block Iran’s influence in the region; lowering oil prices by pumping out oil at record levels, intervening in Yemen, and building an alliance with Turkey to force Bashar al-Assad onto the back foot in Syria, they will need the support of the West. In particular, at a time in which the US moves towards election season, the Saudis will be hoping that they can begin to influence the shape of debates in the US to bring Washington back on its side.

Salman’s attempt to legacy build at the expense of his predecessor, although bad for Abdullah loyalists, is actually a strategically wise move. Barring any other major family disputes or an imminent failure in the king’s health in the near future, the kingdom’s lead policy team is now a strong one. It is reflective of a renewed sense of urgency in the kingdom to face up to the challenges that have beset it internally and externally since the outbreak of the Arab Spring in 2011.

Achieving stability has always been the underlying theme of understanding policy making in Saudi Arabia, but in such unstable times to achieve that stability requires a bit of out-the-box thinking, and the wily old king appears to have understood that to keep things the same, sometimes you have to make changes. 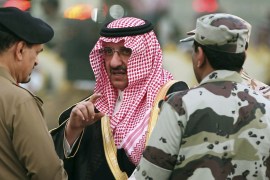