Afghanistan’s President Ashraf Ghani and Chief Executive Officer Abdullah Abdullah celebrated the ancient festival of Nawroz, the Afghan New Year, as they headed to Washington, DC – their first official visit to the US.

Ghani is scheduled to address a US Congress session – an opportunity that his predecessor Hamid Karzai also had in 2002 on his first official visit to the US. However, in contrast with the early excitement of Afghan-US relations, its current state is characterised by an exhausted Washington and a fragile Kabul.

For many in the US, Afghanistan is a headache they wish would go away. There is also a growing number of Afghans withdrawing their early goodwill and trust in the US as a reliable and competent partner. Can Ghani, Abdullah and US President Barack Obama create a new narrative for troubled Afghan-US relations?

There are several reasons for the psychological and political bases for injecting a new momentum in Washington-Kabul relations: the departure of Karzai, who became a despised figure in Washington in recent years, the signing of the US-Afghanistan Bilateral Security Agreement (BSA) and the threat of the Islamic State of Iraq and the Levant (ISIL).

A new beginning should be based on shared principles, right priorities and sound policies. The most important principle is that of shared responsibility.

Afghans’ tendency to absolve themselves of their role in the destruction of their country and its multiple challenges is often reciprocated by the West’s refusal to fully recognise its role in causing Afghan suffering, which began over 30 years ago with the West’s proxy war with its Soviet rival.

The other principle is to reframe Afghanistan from a source of threat or a geo-strategic object/place to a partner and a positive opportunity. Of course, such thinking is blasphemous to mindsets infested with notions of “national interest”, “realism” and “euro-centrism”.

Afghanistan has not only been the “graveyard of empires”. It has also been one of the region’s “empire-builders” and a centre of civilisations. Afghanistan was the home of the first hybrid East-West political order, the Greco-Bactrian kingdom more than 2,000 years ago. It was the heartland of Khorasan – the Persian-Islamic civilization – as symbolised by the great cities of Herat and Balkh.

Afghans' tendency to absolve themselves of their role in the destruction of their country and its multiple challenges is often reciprocated by the West's refusal to fully recognise its role in causing Afghan suffering, which began over 30 years ago with the West's proxy war with its Soviet rival.

In the early 20th century, Afghanistan had the first constitutional monarchy in the Islamic World. Excluding the terror of the Taliban, today’s Afghanistan is an inspiring model for ethnic, sectarian and political stability in the region. The Afghan “good enough” philosophy became the driving principle for the appeasement of the Taliban, drug-lords, endemic corruption, electoral frauds and rewarding Pakistan’s duplicity.

Afghanistan’s young, resilient and entrepreneurial population, and rich cultural heritage, coupled with its indispensable geo-strategic location, abundant natural resources and maturing political order provide the key ingredients for stabilising the country and even the region.

Washington should not treat Afghanistan as mainly a base for its military power in the region. For their part, Afghans should not look at the US as a milking cow for immediate personal enrichment. Japan, South Korea, Taiwan and post-World War Europe should inspire Afghans’ relations with the US.

The Afghan national unity government led by Ghani and Abdullah represents a highly compromised political agreement with contested democratic and legal bases. Therefore, Afghanistan’s most critical issue is its fragile government, followed by a stagnated economy. Once again, London and Islamabad are imposing their agenda and priority on Washington and Kabul by pushing peace talks with the Taliban as the key issue.

The Taliban threat is an acute problem while Pakistan’s hegemonic design for Afghanistan and a weak Afghan state, a war economy are country’s chronic ailments. A peace that is “Made in Pakistan”, promoted by London, sold by Washington, and administered by a paralysed Afghan government is doomed to fail.

A competent and accountable Kabul, a geo-strategically constrained Pakistan, guaranteed by strategic and smart US engagement, supported by a regional consensus are the pillars of an enduring peace in Afghanistan and the region.

In addition to the domestic and global characters of Afghanistan’s challenges and opportunities, there is also a regional dimension. Unlike Iraq, Afghanistan has been fortunate to benefit from a regional consensus during the last decade or so. Both Iran and the US maintain a cold peace in Afghanistan. Russia and the West have developed a practical cooperation. China and the US are developing mutual understanding on Afghanistan.

Contrary to ill-informed perception, India has excluded Afghanistan from its ongoing issues with Pakistan as was demonstrated by Delhi’s reluctance to honour its promise to develop security and defense cooperation with Kabul. Parallel with the principle of inclusivity of Afghan politics, its regional diplomacy should maintain a regional consensus, rather than moving towards regional polarisation.

As stipulated by the US-Afghanistan Strategic Partnership Declaration and the ensuing Bilateral Security Agreement, both nations are committed to develop a meaningful and mutually beneficial partnership.

Kabul’s capacity and Washington’s political will determine if an unequal but mutually affected engagement can become a mutually beneficial one. 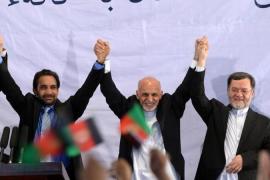 Is this the death of democracy in Afghanistan?

The unity deal is widely seen as a setback in the war-battered country’s process of democratisation.