On the December 24, 2014, a Jordanian F-16 fighter jet crashed near al-Raqqa province in Syria, while executing an air strike for the US-led coalition against the Islamic State of Iraq and the Levant (ISIL), and its pilot Lt Moaz al-Kassasbeh was taken by ISIL fighters.

The imprisonment of Kassasbeh marked a change in the way ISIL handles hostage cases, and that is a direct message to Arab countries participating in the US-led anti-ISIL coalition.

In the early period of its formation, ISIL resorted to taking hostages and prisoners for tactical reasons; to generate income from ransoms, to exchange prisoners with opposing groups in the battlefield, and to intimidate the populace, forcing them to abide by its rule. The use of this tactic as an integral part of its psychological warfare helped the group to control vast territories between Iraq and Syria with minimum resistance.

The more the group expanded, the more it developed its schemes. Not only did ISIL resort to beheading its hostages in public, but it also began to film these executions and disseminate them widely on social media. It did this in order to meet strategic objectives – primarily to publicise its cause worldwide and to attract jihadists.

Hostages then became a tool of warfare. The execution of the two American hostages, James Foley and Steven Sotloff, in the summer of 2014, for instance, contributed to the US intervention against ISIL.

This, in turn, increased the attraction of the group to global jihadists and made many Iraqi Sunnis sympathetic towards its cause. It also gave ISIL a supremacy over other radical Islamist groups.

This progression shows that the value of a prisoner or hostage in ISIL’s modus operandi depends on their status, nationality, and potential for their execution to be exploited as part of the group’s conquest propaganda.

ISIL classifies hostages and prisoners systematically; first, according to their nationality – whether western, non-western but non-Arab, or Arab.

Second, they are categorised according to their function – civilian or military. Finally, they are classified according to the level of impact that their killing would generate if it is publicised. Consequently, hostages or prisoners of low importance might be killed instantly in the battlefield.

This has been the case for most civilians of Arab communities from various religious factions and ethnicities -Christians, Shia Muslims, Yazidi, Kurds, Jews and Sunnis who don’t support ISIL.

Wealthy figures could be exchanged in swap-deals for high-value ransoms, the case of rich families, businessmen and industrial hawkers. Western/non-Arab soldiers, journalists and foreign citizens captured are to be kept alive for public executions to pressure their governments (such as Haruna Yukawa and journalist Kenji Goto for whom a $200m ransom was demanded from the Japanese government).

, they are to be savagely executed in public as traitors of the so-called caliphate. In ISIL ethos, no captured Arab soldier could be exchanged alive.”]

As for Arab soldiers (and especially those whose countries are part of the US-led coalition), they are to be savagely executed in public as traitors of the so-called caliphate.

In ISIL ethos, no captured Arab soldier could be exchanged alive. That has been the case of the Lebanese soldiers captured and executed by ISIL on the Lebanese-Syrian border, the Iraqi soldiers killed in various provinces in Iraq, and finally the Jordanian pilot.

The higher value of a kidnapped soldier and the higher “crime” of his “betrayal” of the caliphate translated into a higher-then-usual level of terror tactics.

Beheading videos, once the preferred method for killing hostages in ISIL – seemingly carried out by a recurring executioner who came to be nicknamed “Jihadi John” – was replaced with the burning alive of the captured pilot in front of a squad of uniformed masked militants.

Additionally, ISIL announced high-value bounties put on the heads of members of the Jordanian air force.

This bold move sets a historical precedent for terrorist organisations; normally, bounties are offered for the heads of outlaws and not the other way around.

Resorting to extreme violence is a way for ISIL to enforce the solemnity of its power, generate support, and further expand.

Military hostages and prisoners are of a unique value to the organisation, compared to their civilian counterparts.

But while for traditional terrorists, such hostages and prisoners are more valuable alive than dead, for ISIL today there are more benefits in their killing.

Mario Abou Zeid is a research analyst at the Carnegie Middle East Center, where his work focuses on governance, terrorism, Islamist movements, Lebanese politics, and the Syrian conflict. 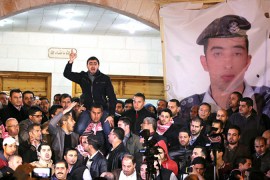 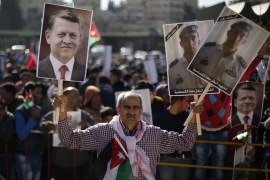 Moaz al-Kassasbeh’s murder has united Jordanians – but are we really ready for war?