For the past three weeks, there has been a steady escalation of clashes between Armenian and Azerbaijani forces over the Nagorno-Karabakh conflict. The renewed fighting began on December 4, when Azerbaijan launched an offensive targeting Armenian positions along the “line of contact” separating Karabakh and Azerbaijan.

In the days that followed, the situation quickly worsened, with an escalation of fighting that left more than a dozen fatalities on both sides. And as hostilities intensified, a fragile ceasefire agreement, first brokered in May 1994, is now under serious threat.

Since then, diplomatic efforts to resolve the conflict have largely floundered. The diplomatic deadlock stems from the different and divisive views of the conflict itself: For Armenia and Karabakh, the principle of self-determination is the guiding issue, while for Azerbaijan it is the competing principle of territorial integrity of states. It is this fundamental contradiction between two principles of international law that continues to hamper a negotiated solution.

This most recent escalation was marked by a dramatic increase in casualties on all sides. For example, since 2013, the rate of casualties (for both soldiers and civilians) has almost tripled. The total number of deaths from these clashes stood at 19 soldiers in 2003, but surged in 2014, with 64 soldiers and 8 civilians losing their lives, representing the highest level of deaths in the over 20 years since the ceasefire agreement. This year, however, there have been at least 56 military fatalities and another 3 civilian deaths on all sides.

Beyond the rising death count, the more worrying development was the use of more serious offensive weapons. Moving well beyond previous incidents where the ceasefire was violated by sporadic sniper fire, there has been a steady upward trend in the use of more serious weapons, ranging from grenade launchers and mortar fire to artillery and rocket attacks.

But even this escalation was surpassed when, for the first time since the 1994 ceasefire, Azerbaijan deployed battle tanks in several attacks. Tension further rose after Armenian forces succeeded in downing an Israeli-made Orbiter-2M Azerbaijani military unmanned aerial vehicle (UAV) or “drone.”

For Azerbaijan, the decision to escalate tension and launch renewed attacks has been largely driven by a combination of diplomatic activity and domestic politics.

More specifically, Azerbaijani operations were related to the December 19 presidential summit between the Armenian and Azerbaijani leaders in a bid to strengthen Azerbaijan’s diplomatic position.

The meeting itself was a disappointment, as fighting only continued after the summit and neither side could forge any breakthrough agreement to even lessen tension and de-escalate clashes. Yet, it was an important resumption of diplomacy and dialogue, as the summit was the first meeting of the two leaders since October 2014.

The parties to the conflict remain simply too far apart on core issues of the negotiations, and are unable to agree to a basic framework for the peace talks, and have also been unwilling to even implement meager confidence-building measures.

In this context, the Azerbaijani strategy is to rely on military escalation as a way to bolster diplomatic leverage within the peace process.

Although this has never delivered any tangible or demonstrable diplomatic dividends, and usually tends to only weaken the Azerbaijani position within the negotiations, this posture is also driven by a justified degree of frustration with the peace process, and a general disdain for diplomacy which is, at times, directly expressed at the mediators themselves.

The second factor, the appeal of domestic political dividends, is driven more by the politically convenient use of nationalism to bolster the Azerbaijani leadership.

But this presents a unique challenge, as the pattern of military operations does not necessarily follow military science or logic, making the application of diplomatic or political pressure difficult and greatly weakening any effective deterrence.

At the same time, Azerbaijan has attempted to widen the conflict to draw Armenia more directly into the conflict and provoke an Armenian overreaction. This is evident in the pronounced expansion of the geography of fighting, well beyond the “line of contact” separating Karabakh from Azerbaijan proper, largely targeting more vulnerable civilian population centres in Armenia’s north-eastern and southern border areas.

Although this strategy did not prompt an Armenian overreaction, it has fostered the development of an Armenian policy of “overwhelming response”, aimed at retaliating for Azerbaijani attacks with a degree of force exceeding the initial assault. Although the Armenian view is such an “overwhelming” response is an attempt to deter Azerbaijan, it also contributes to a dangerous “spiraling up” of the conflict.

For Armenia, the increasing intensity of the attacks is also putting pressure on the Armenian leadership. This has fostered a move towards a more “hardliner” position regarding Azerbaijan, and has recently prompted the Armenian Ministry of Defence to redefine the situation as one of “war” rather than mere ceasefire violations.

This only elevates the level of discourse and makes an escalation of aggressive rhetoric more likely. And this may actually harden the Armenian position regarding the territories of Azerbaijan beyond Karabakh now under their control.

Yet, despite the imperative for diplomacy over force of arms, the outlook remains bleak, for two main reasons. First, most fundamentally, the parties to the conflict remain simply too far apart on core issues of the negotiations, and are unable to agree to a basic framework for the peace talks, and have also been unwilling to even implement meager confidence-building measures.

Second, despite the best efforts of the mediators, there is a pronounced lack of political will necessary to commit to the peace process. This only means that the escalation of tension and upward spiral of fighting are now becoming a dangerous trend. And with each successive round of more intense fighting, it only brings the risk of renewed war that much closer. 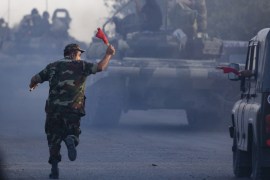 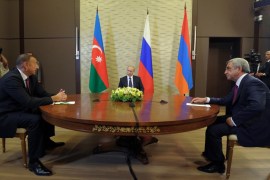 Tensions reignite in the Nagorno-Karabakh conflict

An escalation in attacks on civilians in the South Caucasus region is stoking fears of a return to all-out war. 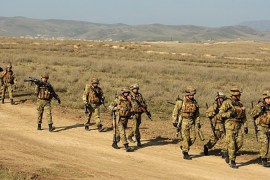 The other Minsk mediation

Beyond eastern Ukraine, another simmering conflict threatens to erupt – Nagorno-Karabakh.