If I were very optimistic, I’d say that President Obama is hoping that Congress will follow the example of the British parliament, and vote against his proposed military strike on Syria. It would let him off the hook – he could avoid an illegal, dangerous, immoral military assault and say it’s Congress’ fault.

But unfortunately, I don’t think that much optimism is warranted. Obama’s speech – not least his dismissal of any time pressure, announcing that his commanders have reassured him that their preparations to fire on command are not time-bound – gives opponents of greater US intervention in Syria a week or more to mobilise, to build opposition in Congress and in the public, and to continue fighting against this new danger. As the president accurately described it, “some things are more important than partisan politics”. For war opponents in Congress, especially President Obama’s progressive supporters, keeping that in mind is going to be difficult but crucial.

Obama said he will “seek Congressional authorisation” for a military strike on Syria. He said he believes US policy is “stronger” if the president and Congress are united, but made clear his belief that he “has the authority to strike without” congressional support. That’s the bottom line. The first question shouted by the press as he left the White House rose garden was “will you still attack if Congress votes no?” He didn’t answer.

There is little question that the Obama administration was blindsided by the British parliament’s vote against the prime minister’s proposal to endorse war. They were prepared to go to war without United Nations authorisation, but were counting on the UK as the core partner in a new iteration of a Bush-style “coalition of the willing.” Then NATO made clear it would not participate, and the Arab League refused to endorse a military strike. France may stay in Obama’s corner, but that won’t be enough.

And Congress was getting restive, with more than 200 members signing one or another letter demanding that the White House consult with them. Too many pesky journalists were reprinting Obama’s own words from 2007, when then-candidate Obama told the Boston Globe that “the President does not have power under the Constitution to unilaterally authorise a military attack in a situation that does not involve stopping an actual or imminent threat to the nation.”

All of that led to the drive towards war slowing a bit. But it didn’t stop. And that’s a problem. Because whatever Congress may decide, a US military strike against Syria will still be illegal, immoral and dangerous, even reckless in the region and around the world. Congress needs to say no.

However frustrated US presidents may be with the UN Security Council’s occasional refusal to give in to their pressure, the law is clear. The United Nations Charter, the fundamental core of international law, may be vague about a lot of things. But it is unequivocal about when military force is legal, and when it isn’t. Only two things make an act of war legal: immediate self-defense, which clearly is not the case for the US The horrific reality of chemical weapons devastated Syrian, not American lives. This is not self-defense. The other is if the Security Council, acting under Chapter VII of the UN Charter, authorises the use of force in response to a threat to international peace and security. That’s the authorisation President Obama knows he cannot get – certainly Russia and China would veto, but right now a British veto would certainly be a possibility if Cameron wanted to respond to his public. And it’s not at all clear a US resolution to use force would even get the nine necessary votes of the 15 Council members. The US is thoroughly isolated internationally.

The problem for President Obama is he still is determined to use military force, despite the requirements of international law. He says he doesn’t need that authority – that maybe he’ll use the 1999 Kosovo precedent to “go around” the Security Council. The problem, of course, is that the 1999 US-NATO assault on Serbia and Kosovo was illegal – faced with a sure Russian veto, Bill Clinton simply announced he would not ask for Council permission. Instead, he would get permission from the NATO high command. But aside from the hammer-and-nail problem (if you’re a hammer, everything looks like a nail; if you’re NATO military leaders looking for re-legitimation, everything looks like it needs a military solution), nothing in international law allows NATO to substitute for the Security Council. The Charter was specifically designed to make it difficult to get authorisation for military force – its whole raison d’etre is to stand against the scourge of war. So any new decision to go to use military force without Council authority means that use of force is illegal.

Right now, in Syria, that means that members of Congress have the chance to prevent another illegal US war. If Congress should approve it, likely for political or partisan reasons that have nothing to do with Syria, their vote would mean direct complicity in an illegal and immoral war.

Pentagon officials have confirmed what logic tells us all: every use of military force threatens civilian lives. More than 100,000 Syrians have been killed in this civil war so far, and hundreds more were killed in what appears to be (remember, we still don’t know for sure) a chemical strike last week – US cruise missile strikes won’t bring any of them back, and more important, won’t protect any Syrian civilians from further threat. To the contrary, low-ranking conscript troops and civilians are almost certain to be injured or killed. Reports out of Syria indicate military offices and more being moved into populated areas – that shouldn’t come as a surprise given the nature of the Syrian regime. But the knowledge makes those contemplating military force even more culpable.

A US military strike on Syria will increase levels of violence and instability inside the country, in the region, and around the world. Inside Syria, aside from immediate casualties and damage to the already shattered country, reports are already coming in of thousands of Syrian refugees returning from Lebanon to “stand with their government” when the country is under attack. It could lead to greater support to the brutal regime in Damascus. In Kosovo, more Kosovars were forcibly expelled from their homes by the Serbian regime after the NATO bombing began than had happened before it started; Syrian civilians could face similar retaliation from the government.

A US strike will do nothing to strengthen the secular armed opposition, still largely based in Turkey and Jordan, let alone the heroic but weakened original non-violent democratic opposition forces who have consistently opposed militarization of their struggle and outside military intervention. Those who gain will be the most extreme Islamist forces within the opposition, particularly those such as the Jubhat al-Nusra which are closest to al-Qaeda. They have long seen the US presence in the region as a key recruitment tool and a great local target.

There is also the danger of escalation between the US and Russia, already at odds in one of the five wars currently underway in Syria. So far that has been limited to a war of words between Washington and Moscow, but with the G-20 meeting scheduled for next week in St Petersburg, President Putin may feel compelled to push back more directly, perhaps with new economic or other measures.

Crucially, a military strike without United Nations authorisation undermines the urgent need for serious, tough diplomacy to end the Syrian war. The US just cancelled a meeting with Russia to talk about negotiations; a couple of months ago, Russia cancelled one. They both must be pushed to meet urgently to arrange and implement an immediate ceasefire and an arms embargo on all sides in Syria.

And finally, what happens the day after? If Syria retaliates against a US missile strike – with an attack on a US warship, or a US base in a neighbouring country, or on US troops in the region, or against Israel … do we really think the US will simply stand back and say “no, this was just a one-time surgical strike, we won’t respond”? What happens when that inevitable response pushes the US closer towards direct full-scale involvement in the Syrian civil war?

The word to Congress now must be – you got the vote. That’s important, because now you can use that vote to say NO to military action.

What should the US do?

First thing, stop this false dichotomy of it’s either military force or nothing. The use of chemical weapons is a war crime, it is indeed what Secretary Kerry called a “moral obscenity”. Whoever used such a weapon should be held accountable. So what do we do about it?

Phyllis Bennis is a fellow of the Institute for Policy Studies. Her books include Challenging Empire: How People, Governments and the UN Defy US Power, on the legacy of the February 15 protests. 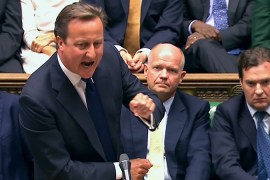 The consequences of Cameron’s Syria defeat

Parliament’s rejection of Syria intervention will have important repercussions in Britain as well as abroad. 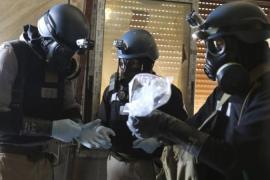 Unleash diplomacy, not missiles, in Syria

Responding only to the use of chemical weapons ignores the fundamental dynamics behind the violence. 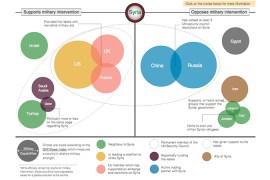