Brazil has been roiled by protests in recent weeks. At first, tens of thousands of people took to the streets across the country to protest bus and subway fare hikes and demand free public transportation.

Rather than scare people off, the heavy-handed police reaction helped stir things up. In Sao Paulo alone, 235 people were arrested last Thursday – many for carrying vinegar to minimise the effects of tear gas. Reports abounded of police brutality and provocation, including a policeman caught on camera vandalising his own vehicle.

Brazil’s corporate media, which until then had vilified demonstrators and called for forceful policing, changed its tune when seven journalists working for one of the country’s biggest newspapers were hurt. Two of them were shot in the face with rubber bullets. Protesters went home chanting: “Tomorrow it will be bigger.”

Indeed it was bigger. Monday saw hundreds of thousands of people demonstrating in more than 20 cities. More than 100,000 people hit the streets in Sao Paulo and Rio de Janeiro. In Brasilia, the capital, protesters occupied the parliament, though they left the area peacefully after some time.

Police violence is a structural problem in Brazil. But the fact that Brazil is presently hosting the FIFA Confederations Cup, and thus is preoccupied with its international image and under special rules agreed with FIFA, makes the situation much worse.

Protests against human rights abuses and misuse of public funds in the preparations for the 2014 World Cup and 2016 Olympics – which took place over the weekend – were again heavily repressed.

The government’s reaction to the protests have intensified the demonstrators’ anger and given focus to a number of diffuse and relatively independent grievances.

There have been two kinds of struggles in Brazil in recent years. On the one hand, indigenous peoples in far-flung corners of the country have fought against the encroachment of agribusiness and big government projects like the Belo Monte dam on their land and livelihoods, while the urban poor have resisted rampant property speculation.

These are the ones who have not benefited from Brazil’s rapid growth in recent years; they are victims of what we might term quantitative development.

On the other hand, many urban Brazilians have risen up to advocate on issues like public transport, cycling lanes, public space, the environment, intellectual property, reproductive rights, LGBT rights, et cetera: struggles around the quality of development.

While these two types of struggles involve very different constitutencies, the struggles themselves are not unrelated.

In both cases, the government’s standard response to its citizens’ complaints has been to dismiss them as naive or disingenuous particularisms in the face of Brazil’s economic growth and wealth distribution projects, ignoring their universality.

These qualitative demands are universal in that they are ultimately about the production of new commons and new rights. Although the public transportation protesters have mostly been young, educated urbanites, polls indicate that they have popular support – hardly a surprise in a country where the quality of public transportation is so low and its cost so high in relation to the average income.

At the same time, the government’s claims to the universality of its project appear dubious when one sees Brazil’s most marginalised groups, such as indigenous people and favela dwellers, dispossessed in the name of development – losing their houses, their livelihoods and sometimes their lives while private fortunes are being made.

Besides, it is not difficult to see the connections between poor communities affected by the oil industry and the government-subsidised swelling of Brazil’s private automobile fleet and disinvestment in public transport; or between the erosion of public space and the exclusionary “urban regeneration” projects spurred by the major events the country is slated to host in 2014 and 2016.

The potential for an explosive new social force in Brazil’s political landscape may lie in turning these connections into actual alliances, bringing together what could be called the quantitatively excluded and the qualitatively concerned. If this is looking like a perfect political storm, it is because the callousness and brutality of the state’s response are acting as a catalyst for several mishandled grievances.

Ultimately, if there is one thing that these protests are about, it is unresponsiveness and insensitivity: local governments refusing to negotiate with protesters, state government-controlled military policies, a political class generally regarded as corrupt and indifferent, mega-events like the World Cup and the Olympics that are – whether legally or illegally – lining the pockets of a few, a state with poor basic education and health services, and a horrid record of violence against its citizens.

The protests are also, perhaps especially, about Brazil’s ruling centre-left Workers’ Party, or PT, which emerged out of Brazil’s social struggles and rode on high hopes of change. Increasingly, however, the PT has become incorporated into the workings of a self-serving political system and developed an attitude that seems to say that, as long as standards of living keep going up, the government is above criticism.

Worrying about quality now, the government’s argument goes, stands in the way of the quantitative reduction of poverty: to raise obstacles is objectively to be against the interests of the poor.

While this suggests a two-stage approach – once quantity is done, we will deal with quality – the problem is that there is little indication this second stage will come. On the contrary: when the meaning of development is narrowed down to economic growth, the measure of success reduced to exclusively quantitative benchmarks like GDP or the total number of university students, and the main goal becomes raising levels of consumption, this seems to contradict the idea of a future qualitative leap.

It is not true, in other words, that everything is fine as long as standards of living go up. The decision, going back to Luiz Inacio Lula da Silva’s presidency, to prioritise a few big players and sectors like agribusiness and construction has created a trap: dependence on a handful of interest groups whose political clout is proportional to their economic weight.

If the PT’s plan is to create a trickle-down economics that actually works, success depends on maintaining rapid growth, which is presently not the case.

When the economy goes well, everybody wins; but when it does not, someone has to take the fall. It remains to be seen from whom the government will demand sacrifices, and whether it will have the wherewithal to impose them on the powerful.

Since Dilma Rousseff’s election as president, popular participation has decreased. Negotiations take place in the corridors of Brasilia, and while political and economic elites inevitably get their way, social movements and the PT’s base are invited to put up or shut up.

Maintaining the coalition created by Lula comes at an ever higher cost. In the last two years, the Brazilian government has repeatedly acted as a progressive cover for profoundly reactionary interests, such as those of landowners and the Christian right.

For decades, the PT played an important role as a channel for new demands and social groups. Now, however, the party is failing to take the initiative in creating new commons and rights, has increasingly tended to turn a blind eye to attacks on existing ones, and has adopted an arrogant, dismissive, “law-and-order” line when faced with popular demands for change.

And by focusing development solely on quantitative growth and consumption, the government reinforces tendencies that go against a future qualitative leap and does a disservice to public debate in Brazil.

Rousseff’s campaign slogan in the last election was “For Brazil to keep on changing”. That is, in a way, what the current protests are about: the meaning and possibility of this next stage. The protesters are not against the government in the sense that they would want to replace it with an even less popular opposition. Rather, they are animated by a growing feeling that if this next stage is to occur, the PT may function as an active force against it.

Even if many participants declare themselves as being neither on the left nor the right, and even if corporate media try to associate them with the opposition’s agenda, this is in essence a progressive movement. It seeks to redefine “development” as qualitative as well as quantitative, and “inclusion” as not only about distribution, but redistribution of wealth and power. “This is not about cents,” says one of the main slogans, “it is about rights“.

For a while now, the PT has hidden behind its undeniable success in raising Brazilians’ standard of living, with the blackmail that things would be worse were the opposition back in power. It is a qualitative measure of success that the country’s young generation, whom the last decade has prepared to expect more from their country, are now saying that this is not enough.

Rodrigo Nunes is an associate lecturer and researcher at PUCRS, Porto Alegre, Brazil, where he coordinates the research group Materialismos. He is a member of the editorial collective of Turbulence, and occasionally blogs here. 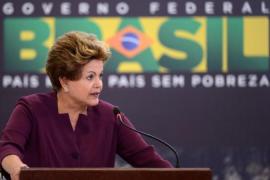 Despite Brazil President vowing to listen to voice of protesters, day riots break out on the streets of Sao Paulo. 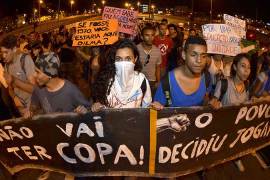 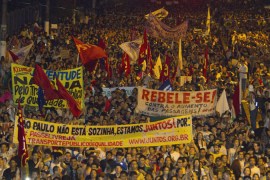