I wondered why I was not driving a Porsche. The winding road was a long stretch of impeccably fine asphalt with well-designed road signs. Forget about car advertisements depicting a European coastal road. If there ever was a dream drive, it is the Auca Road in the Ecuadoran province of Orellana. I marvelled at the quality of the road, far superior to anything I had experienced in Europe or the US, regretting that a Porsche may never travel this road. Alas, the Amazon is no place for racing cars.

The Auca Road, which refers to the Kichwa word for “savage”, was built in the 1970s on Waorani territory for Texaco oil exploration. Its recent renovation is a harbinger of a major new infrastructure push across the Amazon. As one marvels at the road, however, we also should fear that the beauty may soon turn into beast.

There is something incommensurable about Ecuador’s recent investment in road infrastructure. Since 2007, the national government has invested over US$7 billion in roadwork, improving 7,600 kilometres of Ecuador’s approximately nine thousand kilometre national highway system. The huge investment in renovating the Auca Road is testimony to the priority the administration of recently reelected President Rafael Correa has made in improving infrastructure to increase connectivity in the Amazon, a region characterised by difficulty of access.

The Troncal Amazonica, a stretch of about one thousand kilometres traversing the Ecuadorian Amazon from north to south alongside the foothills of the Andean mountain range, is emblematic of the infrastructure push in a relatively marginal region with dispersed population patterns. The 95 kilometres of the Auca Road connect the town of Coca with Waorani territory, serving less than eight thousand peoples, 21 percent of whom are indigenous. Coca’s flamboyant bridge [PDF] across the Napo River, where the Auca starts, is another icon of such infrastructure projects, with bicycle lanes and ornamental lights that make Miami bridges look understated.

The construction of roads in the Amazon is a Latin American trend. Bolivia is building a road that connects the Amazon basin to the Andes, traversing the TIPNIS national park and indigenous reserve. This initiative, also geared at improving connectivity, would permit Brazilian soybeans to reach Pacific ports to be exported to China. The Brazil-financed Initiative for the Regional Integration of South America (IIRSA) encompasses over 500 infrastructure megaprojects, most of which are located in the Amazon.

In addition to these emblematic roads, there are many more, which often do not appear on maps. Where the pavement stops on the Auca Road, for instance, one can cross a bridge and pass a large sign that says “intangible territory” to drive (possibly in a Porsche) into protected Waorani territory. In the Brazilian state of Pará, unofficial roads already represented 82 percent of the existing roads in 2001, and the longest is 215 kilometres in length. Far from trivial, these roads signify a new logic of occupation, characteristic of logging, mining and other extractive activities.

Roads represent development. That is why Ecuadoran government ads boast pictures of smiling indigenous Shuar semi-naked with traditional body paint and feathers standing by a paved roads symbolising modern connectivity. Pavements brings change. Yet such change is a double-edge sword, making the long-term impact of these roads difficult to assess.

Roads are the single most important predictor of deforestation, notably in the form of agriculture. Loggers and miners are followed by cattle ranchers, whose vast spreads encroach on the forest. Satellite images from various sources un-controvertibly show how roads inexorably lead to rapid deforestation.

In Brazil, the construction of the Trans-Amazonian highway led to a 13-fold increase in deforestation. As air-conditioned shopping malls take over the jungle, this trend is accelerating. Brazil’s latest census shows that its Amazon population increased at a rate twice the national average over the last decade. The surge in migration means that urban areas are de facto swallowing the rainforest wreaking irreparable damage to Amazon cultures and ecosystems.

For NEBE researchers, who collaborate between Ecuador, Bolivia, and the Netherlands to study the impact of extractive industries, the real concern is the expansion of the oil frontier. Roads spearhead the expansion of the extractive frontier by providing infrastructure to speed the exports required to supply the global demand for oil and minerals. Close to Auca, a US company built the Maxus road in the 1980s, and there is currently a road under construction in oil block 31 in the Yasuni. If the next round of oil auctions takes place as planned, Ecuador’s government will likely construct more roads into pristine areas to facilitate the activity of extractive industries.

From a broader perspective, Amazon roads are in effect subsidising the global economy of extraction. Most of Ecuador’s oil goes to China [SP], a trend that is unlikely to change anytime soon. In Brazil, mining companies have their eyes on the mineral wealth of Yanomami lands. Far from being “roads to nowhere”, these infrastructure projects symbolise the global power of the extractive model of development.

One of the ironies is that the governments that are aggressively penetrating the vast green Amazon periphery are often the ones to advocate the rights of nature. Ecuador incorporated the rights of nature in its 2008 Constitution, while Bolivia took global leadership organising the World’s People Conference on Climate Change in the aftermath of the failed 2009 Copenhagen summit. 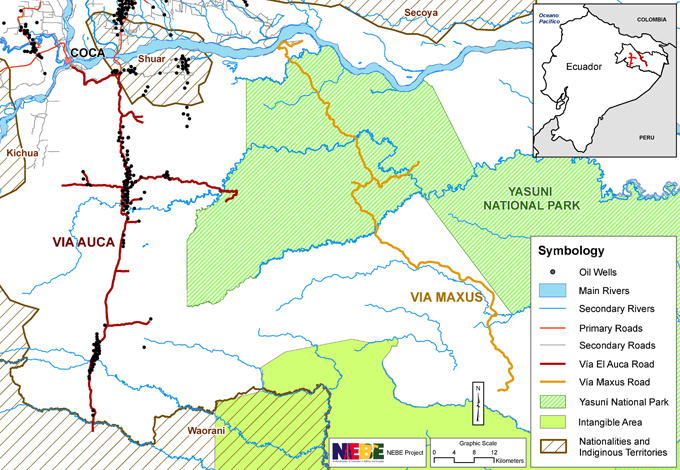 Beyond the oil frontier, it is the expansion of the state that is at stake in the construction of Amazon roads. The Amazon’s ecology is extremely diverse and varies sharply from the Tepuis of Venezuela to the lowlands of Manaus, yet everywhere it constitutes an obstacle to state control. The Inca Empire repeatedly failed to conquer the region, and if colonial powers managed to traverse it, none successfully established lasting control over its territories. The modern nation-state has not fared much better.

The Amazon is in a sense an un-governed space. One can interpret this as denoting a no-man’s-land where smuggling and illegal activities thrive in quasi independence from state control. Yet we can also understand it as a zone of deeper cultural resistance to coercive practices of central governments. James C Scott analysed the hills of Southeast Asia as being historically a zone of refuge from stateness. The Amazon also is a space where people have historically evaded the state and the market. That is why runaway slaves established so many maroon communities – named Quilombos – in the Brazilian Amazon.

When states build roads to expand Amazon connectivity, they are actually expanding their grasp over territories that have historically remained beyond their reach. They are expanding state sovereignty to subjects that have managed to survive at its margins. Construction of roads into the Amazon is an effort to expand the control of the state – and global markets -over the people as much as over the land.

Roads are dangerous because of their devastating ecological impact and the extent to which they strengthen economies of extraction. They are even more dangerous because the Amazon is one of the few precious places where it is still possible to imagine alternative political arrangements to the nation-state. The real beast is the one that destroys our ability to think creatively.

Manuela Picq has just completed her time as a visiting professor and research fellow at Amherst College.