Can Twitter provide insights into whether political Islamism in Egypt is an ideology of the poor? And what does Twitter reveal about polarisation and tension in Egyptian society?

Given the relative ease with which large amounts of Twitter data can be collected and analysed and the role that Twitter played during the Egyptian revolution, more and more interdisciplinary research combines methods from both computer science and political science and utilises Twitter to study social phenomena at a large scale. Big data makes it possible to address research questions quantitatively and with little effort that, previously, could only be addressed qualitatively or through a painstaking process of gathering survey data.

One of the first pieces of research that took such an approach to study political Islamism in Egypt was done by Todd Mostak for his 2012 Master’s thesis in collaboration with his advisor Tarek Masoud. Mostak and Masoud turned to Twitter to test whether the Muslim Brotherhood was drawing crucial support from underprivileged areas in Cairo and whether political Islam is an “ideology of the poor”. Though the Twitter population is not representative of the whole population, there is scientific value in developing new methodologies that turn to online data to answer questions about the offline world. For their research, Mostak and Masoud used 25 million geocoded tweets, employed different methods to infer a user’s level of affinity for political Islam, and then combined this data with fine-grained demographic information for neighbourhoods in Cairo. Through their methodology they find evidence against the proposition that Islamism in Egypt is an ideology of the poor – the fraction of Islamist Twitter activity is not higher in poorer areas.

In the work that I have done with Kiran Garimella at Qatar Computing Research Institute and Alaa Batyneh at Al Jazeera, we address a different question and focus on the dynamics of the polarisation in Egyptian society. Concretely, we are interested in gauging political tension through online data to have a “barometer” that indicates how charged and explosive the situation is at a given point in time. Our research shows that simply looking at whether Islamists and secularists use the same hashtags goes a long way towards this goal.

In more detail, we start by identifying about two dozens of high profile politicians and activists that are close to either Islamists (e.g., @MuhammadMorsi) or secularists (e.g., @ElBaradei). In a second step, we identify thousands of Twitter users who have publicly retweeted any of the high profile Twitter handles we identified. Though occasionally users, such as journalists, retweet figures with very different political views, we find that for about 80 percent of users the Islamist-vs-secularist orientation can be correctly inferred through their retweet patterns.

Reasoning about the political orientation of identified individuals comes both with ethical concerns and with considerable statistical noise. Fortunately, the size of the data allows us to go beyond reasoning about, so to speak, atoms of society and describe the pressure of the gas comprising them, called Egypt, at a macroscopic level. We do so by observing the hashtags used by the two groups, retweeters of Islamist and secular seed users, every week. To choose examples in English, in the week from June 29 to July 5, 2013 the hashtag #MuslimsForMorsi was used far more commonly among retweeters of Islamists than seculars and would be assigned a polarity score of 90 percent Islamist, whereas #tamarrod, referring to the Egyptian political movement founded in protest against then-president Morsi would be almost 100 percent secular on the same axis. Both examples make intuitive sense and illustrate the different positions. But not all hashtags are polarised and in the same week, the “Follow Friday” (#ff) followed a balanced 50-50 usage pattern after normalising for the sizes of the two camps. Recent data can be explored in an online demo.

Though individual hashtags can help tell a story -they do not paint the larger picture as there will always be partisan issues, even in times of calm and dialogue. But averaging the degree of “extremity” or partisanship, i.e. the distance from a 50-50 split, of all hashtags in a week is more telling. A low value of this score means that both camps speak the same (Twitter) language, whereas a high value indicates that, as far as hashtags are concerned, they speak very different languages. 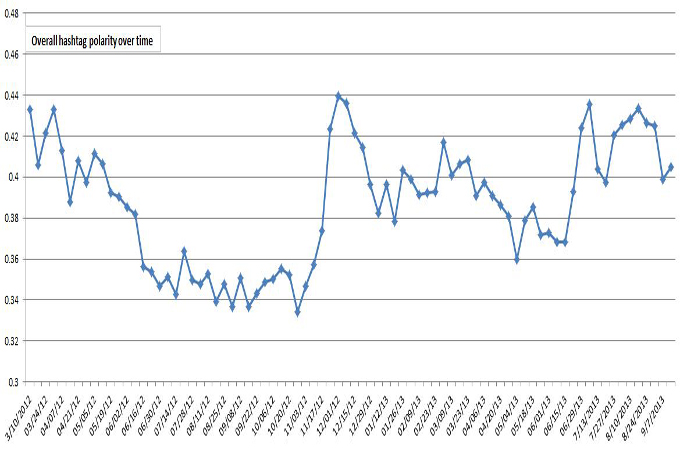 The figure above shows the average hashtag polarisation for each week from March 2012 to September 2013. The avid reader will notice that the plot generally agrees with key events in Egypt’s recent history with peaks corresponding to events such as the constitutionality crisis in late 2012 or the coup d’etat on July 3. Going back further in time to include Mubarak’s fall is not possible as Twitter only introduced hashtag support for Arabic in early March 2012.

Note that this line of research does not try to monitor or predict concrete events, such as the number of people protesting after Friday prayers. It rather tries to serve as a barometer for polarisation in society and visualises trends. As Twitter penetration rates in Egypt and other countries continue to grow, more and more opportunities for Computational Social Science arise making this a fascinating area to work in.

Ingmar Weber is a senior scientist in the Social Computing Group at Qatar Computing Research Institute. His academic career has continuously drawn him further South with stops at 52.2°N (Cambridge University), 49.2°N (Max-Planck Institute for Computer Science), 46.5°N (EPFL), 41.4°N (Yahoo! Research Barcelona) and 25.3°N (QCRI). His interdisciplinary work focuses on how user-generated online data can be used to answer questions about society at large.