Did the Taliban assassination of Berhanuddin Rabbani, the Chairman of the Afghan High Peace Council, bring a potentially permanent end of peace talks in Afghanistan?

You would have to believe that, based on media coverage of the event. The New York Times reported that the assassination had “struck a body blow to the peace process”, and that theme dominated almost every story. Most stories included quotes from Rabbani supporters such as one in the Times article declaring: “The peace process is finished.”

Dexter Filkins was more emphatic, opining in the New Yorker that the Rabbani assassination was a “blow to the very idea that reconciliation with the Taliban is possible – or even desirable.” It could even be “the opening shot in the civil war that more and more Afghans believe could follow on the heels of the American and NATO withdrawal”, Filkins wrote.

But this storyline is based on the premise that Rabbani and the High Peace Council had been offering the Taliban a good faith effort to negotiate a peace settlement. In fact, what Rabbani was offering was the same thing Gen David Petraeus had offered to the bogus Quetta Shura official a year earlier: A discussion that could not possibly resolve the overriding issue for the Taliban, which is the indefinite presence of US and NATO troops in the country.

Rabbani vs the Taliban

As the president of the Northern Alliance during its civil war with the Taliban from 1996 to 2001, Rabbani was among the most vociferous foes of the Taliban. He viewed even Karzai’s rhetorical gestures toward “reconciliation” with the Taliban as a way of completing the process of Pashtun domination over Tajiks and other non-Pashtun minorities.

In February 2010, seven months before he was named to head the High Peace Council, Rabbani had declared to Canadian author and journalist Terry Glavin: “Bringing back the Taliban by some kind of reconciliation is not to bring about security. This is to play a card against others … It is to bring an ethnic card into play in Afghanistan.”

The only program for the Taliban Rabbani had embraced as Chairman of the HPC, in fact, was “offering amnesties and jobs to Taliban foot soldiers and asylum in third countries to leaders”, as Reuters reported September 20.

The Taliban leaders had never believed that the HPC was intended to negotiate a political settlement. On January 12, 2011, the Taliban declared on the website of the “Islamic Emirate of Afghanistan” that they regarded the High Peace Council as serving solely “cosmetic” purposes as “part and parcel of the American war strategy”.

The article cited, in particular, the fact the HPC “do not consider the withdrawal of foreign forces from Afghanistan … as an important item of the agenda”.

More concretely, the Taliban complained that the HPC did not “follow a roadmap that would lead to a decisive stage where peace and reconciliation will become … indispensable”.

That was an apparent reference to a proposal dubbed a “road map” to a settlement by four former Taliban officials, including Mullah Abdul Salam Zaeef, an early leader of the Taliban movement who spent two and a half years in the US detention centre at Guantanamo Bay.

The “road map” proposal assumed that the United States would have to play the key role in any negotiations. It called for the United States to end its night raids and for the Taliban to stop attacks on government personnel and infrastructure as “confidence-building measures”, after which the two sides would negotiate on the central issues of the withdrawal of all foreign troops from Afghanistan and the Taliban’s renunciation of ties with al-Qaeda.

Only after they reached agreement on foreign troops and al-Qaeda would the negotiators tackle the question of an internal political settlement, which would revolve around changes to the Afghan constitution. The same Taliban commentary seemed to leave the door open to dealing with the HPC, but only if it dealt with the central problem of the foreign troop presence.

“If the peace council wants, in earnest, to usher in peace in Afghanistan,” it said, it should confront the Americans on “whether they are ready to respect and accept a solution based on a pullout of their forces from Afghanistan”.

That is not what happened, however, in the months that followed that Taliban statement on the HPC. The Council initiated contact with the Taliban in May, and over the next four months interacted frequently with, and developed trust in, its Taliban interlocutors. But the account provided of those contacts by Council Member Rahmatullah Wahidyar in his September 22 press conference is revealing – primarily for what it fails to mention. Rabbani and his advisors appear to have been unconcerned by the fact that the HPC could offer nothing to the Taliban on the central problem of US and NATO troops.

And when the Taliban contact informed the Council a week before the assassination that the Taliban leadership was now prepared to enter into talks with the Afghan government, the Council officials were not worried by the fact that such talks would have contradicted the consistent public and private Taliban position that that they could be no negotiations on an internal settlement until the issue of foreign troop presence was resolved.

These all-too-amiable contacts were taking place, moreover, against a backdrop of the Obama administration and Karzai manoeuvring to keep US troops in Afghanistan indefinitely. In mid-March, US Deputy Undersecretary of Defence Michele Flournoy revealed – in Congressional testimony – the US intention to continue to carry out “counter-terrorism operations” from “joint bases” in Afghanistan well beyond 2014.

That announcement came just as the Obama administration was beginning a series of secret meetings with a Taliban representative in Germany and Qatar. They were explicitly understood to be “preliminary” rather than substantive talks, but the Taliban certainly posed the question whether the United States was prepared to offer a timetable for withdrawal in substantive negotiations.

The Taliban broke off the talks in May, and US officials later claimed that it was because the existence of the talks had been leaked to the media. But if the United States had said anything to persuade the Taliban that it was prepared to offer such a withdrawal schedule, the talks would certainly not have been so abruptly terminated.

As I reported in July, former Afghan Prime Minister Ahmad Shah Ahmadzai told me that a group of Taliban officials he had met earlier that month had said, once the Americans tell them ‘we are ready to withdraw’, they would agree to have peace talks.

By late August, however, the last ambiguity surrounding the US policy on troops in Afghanistan had been removed. The Telegraph’s Ben Farmer reported August 19 that the Obama administration and Karzai were close to an agreement that would keep up to 25,000 US troops, including Special Operations Forces as well as US fighter planes and helicopter gunships, until at least 2024.

At that point, the Taliban and Rabbani both knew that the HPC had no power to negotiate a real peace settlement with the Taliban. It should be no surprise, therefore, that the Taliban took advantage of the opportunity to kill the credulous Rabbani. The only surprise is that Rabbani and his advisors could have actually believed that the Taliban were giving up their primary war aim so easily.

After all, the Taliban were continuing to show, month after month, that they could strike at targets in most heavily protected zones in Kabul and elsewhere – and that their targets included prominent political, administrative and security officials such as Rabbani.

When Karzai’s national security advisor, Rangin Dadfar Spanta, revealed the outlines of the “strategic partnership” pact in early August, the Deputy Chairman of the HPC, Abdul Hakim Majid, made a highly revealing comment to The Telegraph’s Farmer. He said he suspected the Taliban had “intensified” their insurgency in response to the news that Karzai was about to agree to allow the United States a semi-permanent military presence in Afghanistan.

That observation puts in sharp relief the profound lack of realism of the popular assumption that a “peace process” could have been underway in the context of the US-Karzai manoeuvring to take US military presence off the negotiating table.

But we can now expect a cascade of stories for many months blaming the absence of Afghan peace negotiations on the Rabbani assassination – rather than on a fundamental policy decision by President Barack Obama to hold onto a semi-permanent military presence.

Dr Gareth Porter is an investigative journalist and historian specialising in US national security policy. His latest book, Perils of Dominance: Imbalance of Power and the Road to War in Vietnam, was published by University of California Press. 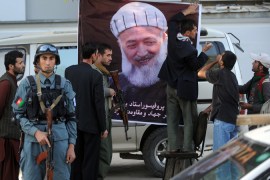 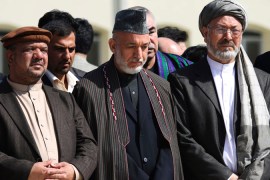 Speech signals willingness to negotiate and determination to “fight the enemies” as slain peace broker is buried. 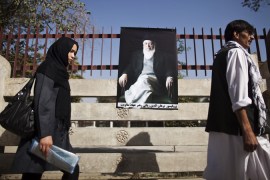 Hundreds gather to offer condolences a day after Burhanuddin Rabbani killed in suicide bombing attack in the capital.