Kashmir has been the major source of conflict between India and Pakistan since the departure of the British from the region in 1947. Both countries have fought open and covert wars on this thorny issue over the past 60 years.

The problem started right after independence in August 1947, when Maharaja Hari Singh, the Hindu Dogra ruler of the Muslim-majority state of Jammu and Kashmir, decided to join India after failing to maintain independence. Pakistan’s nascent political leadership then decided to reverse the decision by force. However, lacking effective military power, it decided to use Pushtun tribesmen from the North West Frontier Province.

Many British officers were, at the time, serving with the Pakistan army – at various levels, including almost the entire top brass. The political leadership naively thought that such a major operation could be kept secret from senior officers. It assigned junior Pakistani officers to run the operation, bypassing the normal military chain of command. An assorted lot of civilians, serving Pakistani officers and former Indian National Army (INA) officers cashiered by the British were given the leading role.

The major flaw was completely ignoring the native Kashmiris; a mistake that the Pakistani army has repeated again and again over the past 60 years. After initial success, tribesmen were halted when regular Indian troops were introduced. Pakistan also sent regular troops but publicly denied any involvement. The fight resulted in a stalemate and when the ceasefire was announced in 1948, each side found itself controlling a portion of Kashmir.

From the Pakistani point of view, several factors – including the failure to include Kashmiris in the operation, ignoring serious drawbacks of using tribesmen in such a situation and rivalries among people conducting the operations – were responsible for the stalemate. The major fallout, however, was the use of junior officers outside of the normal chain of command, with disastrous results for the professionalism of the nascent Pakistan army officer corps.

The result was the first failed coup attempt in 1951 by a group of army officers involved in Kashmir operations. The newly appointed first Pakistani commander-in-chief, General Muhammad Ayub Khan, used this opportunity to ease a number of officers out of the army; the majority of them left-leaning officers. This purge opened the doors for more conservative and right-leaning officers to climb the promotion ladder. A few years later, when the military decided to join the US and Western alliances in the Cold War, there were not many officers left serving to give counter arguments.

Pakistan decided to deploy clandestine troops into Kashmir and publicly denied any involvement or infiltration. Once again, no serious effort was made to engage the local Kashmiri population in the planning and execution of the operation. The result was that locals informed Indian police and troops in Kashmir and most Pakistani soldiers who had been dropped in Kashmir were promptly rounded up.

In the next phase, Pakistan moved many of its troops stationed in Pakistan-controlled Kashmir (PCK) into Indian-controlled Kashmir (ICK). India widened the conflict by mobilising more troops to relieve pressure in ICK. The result was a 17-day war between the two countries – with no clear winner. Another ceasefire was announced, and both countries found themselves in the same positions as they were before the war started.

This time the fallout for Pakistan was much more significant. East Pakistan – now Bangladesh – the country’s “eastern wing” with a population consisting mostly of Bengalis – was separated from the “western wing” by more than a thousand miles of hostile India. Bengalis were already protesting over not having equal representation in the country’s government, including within the civil service and armed forces.

Bengali alienation became acute, and many accused West Pakistan, where major army, air force and naval assets were stationed, of engaging in a reckless adventure to help a few thousand Kashmiris, while endangering millions of Bengalis – leaving them at the mercy of the hostile India.

Following the Soviet invasion of Afghanistan in 1979, Pakistan was fully engaged on its western front for the best part of a decade and kept a low profile on the Kashmir issue. During this period, Pakistan’s spy agency, the Inter Service Intelligence (ISI), cooperated with a number of other intelligence agencies to recruit, train and launch “irregulars” from Afghanistan – as well as other countries – against Soviet troops in Afghanistan. When Soviets decided to leave Afghanistan, a confident Pakistani military decided to replicate the Afghan project in Kashmir.

Discontent in ICK was rising after the disputed 1987 state elections. It quickly became a popular uprising after Indian heavy-handed security measures resulted in almost complete alienation of the Kashmiris of ICK. An indigenous Jammu and Kashmir Liberation Front (JKLF) started to build a nascent political and paramilitary infrastructure in ICK to confront India.

JKLF had an agenda to keep Kashmir free of both Indian and Pakistani influence – while Pakistan’s goal was the accession of Kashmir to Pakistan. The ISI patronised a parallel and separate structure, and brought Kashmiris from PCK and ICK to training camps in Pakistan.

In the early 1990s, the ISI decided to introduce foreign fighters to the theatre. Many Pakistani, Afghan and Arab militants found their way into ICK. This was achieved under the influence of some “reverse indoctrinated” officers of the ISI. These battle-hardened militants gave a tough time to Indian security forces. However, this action proved to be disastrous for Kashmir’s struggle – as it was now linked with international terrorism. Like their Afghan counterparts, many militant groups fighting in Kashmir fractured and ended up rapidly escalating security challenges inside Pakistan.

In the spring of 1999, Pakistan’s army chief, General Pervez Musharraf, and a small coterie of his inner circle embarked on another adventure in the Kargil area of Kashmir. In the aftermath of nuclear tests by both India and Pakistan in 1998, Musharraf felt confident to launch an offensive under the nuclear umbrella. This was despite the fact that a similar scenario played out at the army’s own National Defence College concluded years earlier that such an adventure would invite a full scale Indian response.

The operation was launched in secrecy – not taking into confidence even some senior officers. Pakistan, sticking to its historical script, denied any involvement – but kept awarding gallantry awards to soldiers and officers killed in the conflict. It made the country a laughing stock, and even its staunch ally China asked Pakistan to pull back. Poor planning – especially on the logistics side – along with an overwhelming Indian military response and almost complete isolation of Pakistan on the diplomatic front, forced Pakistan to pull back its troops from ICK. Then Prime Minister Nawaz Sharif later alleged that General Musharraf kept him in the dark about the extent of the operation.

General Musharraf claimed that the political leadership was briefed and had been on board.

Following the operational briefing by Lieutenant General Mahmud Ahmad – one of the architects of the plan – the assistant chief of air staff for operations, Air Commodore Abid Rao, remarked: “After this operation, it’s going to be either a court martial or martial law,” according to retired Air Commodore Kaiser Tufail.

In the past 60 years, India and Pakistan have been locked in a conflict which is more than territorial. Despite gross contradictions in both countries, they see this issue through the prism of the past. Pakistan sees the annexation of Kashmir as the logical culmination of the triumph of the “two nation theory”; the basis of the birth of Pakistan that stipulated that Hindus and Muslims of the subcontinent were two nations.

India sees the annexation of Kashmir as a triumph of secularism and a confirmation of the narrative that religion is not the basis of identity for Indian citizens.

Kashmiris, meanwhile, are stuck between these polarising and uncompromising positions of their overlords – with no end in sight to their suffering.

Hamid Hussain is an independent analyst based in New York. 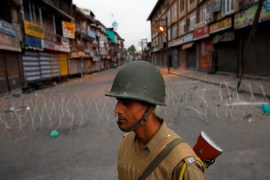 The political will for peace in Kashmir

The main obstacle to peace between India and Pakistan is a passive acceptance of the status quo. 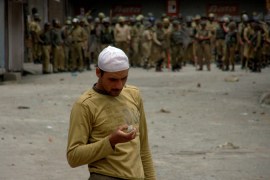 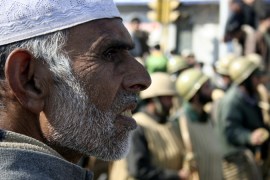 Kashmir: Before and after the politicians

Last September a delegation of Indian politicians visited Kashmir, but is the subsequent calm merely an illusion?