Policy debates in Washington are moving ever further from reality as a small elite is moving to strip benefits that the vast majority need and support. The battle over raising the debt ceiling is playing a central role in this effort.

The United States is currently running extraordinarily large budget deficits. The size of the annual deficit peaked at 10 per cent of GDP in 2009, but it is still running at close to nine per cent of GDP in 2011. The reason for the large deficits is almost entirely the result of the downturn caused by the collapse of the housing bubble. This can be easily seen by looking at the projections for these years from the beginning of 2008, before government agencies recognised the housing bubble and understood the impact that its collapse would have on the economy.

At the beginning of 2008, the Congressional Budget Office (CBO), the country’s most respected official forecasting agency, projected that the budget deficit in 2009 would be just 1.4 per cent of GDP. The reason that the deficit exploded from 1.4 per cent of GDP to 10.0 per cent had nothing to do with wild new spending programmes or excessive tax cuts. This enormous increase in the size of the deficit was entirely the result of the fallout from the housing bubble.

Remarkably, both Republicans in Congress and President Obama have sought to conceal this simple reality. The Republicans like to tell a story of out-of-control government spending. This is supposed to be a long-standing problem (in spite of the fact that Republicans have mostly controlled the government for the last two decades) that requires a major overhaul of the budget and the budgetary process. They are now pushing, as they have in the past, for a constitutional amendment requiring a balanced budget.

It might be expected that President Obama would be anxious to correct the misconception about the budget, but this would not fit his agenda either. President Obama is relying on substantial campaign contributions from the business community to finance his re-election campaign. Many business people are anxious to see the major government social programmes (Social Security, Medicare, and Medicaid) rolled back. They see the crisis created around the raising of the debt ceiling as a unique opportunity to accomplish this goal.

In order to advance their agenda, President Obama also has an interest in promoting the idea of the deficit as being a chronic problem. Plus, it gives him an opportunity to blame the deficit on the fiscal choices of his predecessor, President Bush. Therefore, in his address to the country on Monday (July 25), he told the public that as a result of President Bush’s tax cuts, his wars, and his Medicare prescription drug benefit, the deficit was on track to be more than $1tn in 2009.

This is more than five times as large as the actual figure projected by CBO. However, President Obama’s distortion preserved the idea of the deficit as a chronic problem, while also getting in an attack on the Republicans. It also allows him to avoid talking about the housing bubble. This is a topic that he seems anxious to avoid, since many large contributors to his re-election and to the Democratic Party profited enormously from the bubble.

The claim that the deficit is a chronic problem and not primarily the result of a severe cyclical downturn also opens the door for cuts to the country’s major social welfare programmes. These cuts are hugely unpopular. All three major programmes enjoy overwhelming support among people in all demographic groups, including conservative Republicans. There is no way that an ambitious politician would ever suggest major cuts to these programmes apart from a crisis.

In this respect, the crisis over the debt ceiling is the answer to the prayers of many people in the business community. They desperately want to roll back the size of the country’s welfare state, but they know that there is almost no political support for this position. The crisis over the debt ceiling gives them an opportunity to impose cutbacks in the welfare state by getting the leadership of both political parties to sign on to the deal, leaving the opponents of cuts with no plausible political options.

To advance this agenda they will do everything in their power to advance the perception of crisis. This includes having the bond-rating agencies threaten to downgrade US debt if there is not an agreement on major cuts to the welfare state.

In principle, the bond rating agencies are only supposed to assess the likelihood that debt will be repaid. However, they showed an extraordinary willingness to allow profit to affect their ratings when they gave investment-grade ratings to hundreds of billions of dollars of mortgage-backed securities during the housing bubble. Given their track record, there is every reason in the world to assume that the bond rating agencies would use downgrades or the threat of downgrades for political purposes.

This means that the battle over the debt ceiling is an elaborate charade that is threatening the country’s most important social welfare programmes. There is no real issue of the country’s creditworthiness of its ability to finance its debt and deficits any time in the foreseeable future. Rather, this is about the business community in general, and the finance sector in particular, taking advantage of a crisis that they themselves created to scale back the country’s social welfare system. They may well succeed.

Dean Baker is co-director of the Center for Economic and Policy Research in Washington, DC. 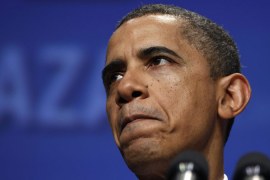 Congress remains deeply divided as politicians grapple for a debt deal amid warnings of dangers to the world at large. 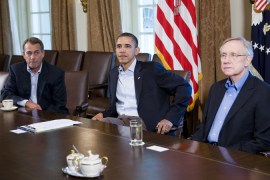 US debt plans in deadlock 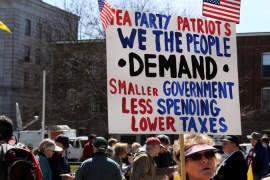 Conservatives cynically use the US debt ceiling as a bargaining chip; meanwhile, Americans suffer.