Turkey’s elections resulted in an increase in the number of women in the 550-seat parliament from 48 to 78.

At 14 per cent, the proportion of women in the new parliament is higher than in at least two European Union states, Romania and Cyprus, according to figures compiled by the Inter-Parliamentary Union. But it still falls well below the EU average, and even the world average of about 19 per cent.

In his victory speech, Recep Tayyip Erdogan, the prime minister, said that “no one should doubt that we will protect the dignity, faith and lifestyles of those who did not vote for us”.

But the fact is, some do doubt – among them a dynamic movement of women’s NGOs that both pressured and assisted Erdogan’s Justice and Development Party (AKP) in legislating pro-women reforms between 2002 and 2005.

The AKP has been applauded by liberal Turks and Western observers alike for being receptive to the lobbying of these women’s organisations, and for enshrining gender equality in Turkey’s civil and penal codes, as well as launching progressive initiatives to combat domestic violence and increase the rate of girls’ education.

In the past few years though, trust has dipped and friction has increasingly surfaced between the ruling party and these same activists.

Only a few days before the election, the Women’s Platform for Equality Mechanisms – a coalition of 71 women’s NGOs – was up in arms because of an announcement that the State Ministry for Women and the Family would be restructured and renamed the Ministry of Family and Social Policies.

Women activists argue that a distinct mandate to ensure gender equality should be preserved. They point out that, in its new form, the ministry falls short of responsibility to ensure equality – and instead is tasked only with protecting weak social groups such as children, the disabled, the elderly, veterans and women, as well as strengthening “the institution of the family”.

While Erdogan responded to this criticism as “a detail,” the tense exchange reflects how terse relations have become between women’s NGOs and the prime minister.

The friction dates back to 2004, when, on the eve of passing a progressive penal code, the AKP attempted to introduce an article that would have criminalised adultery. Though the attempt was aborted due to domestic and European outcry, the incident cast doubt about whether party leaders genuinely agreed with the spirit of the laws legislated.

Since then, other incidents have driven a wedge between feminist women and the prime minister. While Erdogan underlines the inherent differences between women and men, and argues against a quota to balance the playing field in political representation, feminists perceive this to evoke the traditional view that women are fit to run the household, while public life is the man’s domain.

Erdogan’s calls for Turkish women to have at least three children each, which he reiterated on the campaign trail, and his argument that birth control was advocated by those who wanted to weaken Turkey, are all the more controversial given that state childcare facilities are practically absent.

The women’s movement attributes Turkey’s rising figures of domestic violence and decreasing levels of female participation in the workforce to a lack of political will.

While Erdogan maintains that his party is simply socially conservative and pro-family, the backdrop is a failure by state institutions to provide the support needed for women who choose to break out of abusive family environments.

In a society still struggling with repression and violence under the guise of protecting morality or ‘honour’, the political rhetoric of a charismatic leader about women’s choices can have real consequences.

Raising eyebrows, Erdogan opined that such indiscretions do not qualify as “one’s private life”, because they did not involve legitimate experiences between a man and his wife.

Rejection of a restricted internet

Meanwhile, protests were held against expanding internet restrictions that have rendered adult material virtually inaccessible. Blocking sites deemed “obscene” is justified by officials as reflecting the will of the citizens, who complain about “content inappropriate for Turkish families”.

The new government inherits not only a sceptical audience of women’s NGOs but also deep gender inequalities that could limit the ruling party’s ability to achieve some of the top items on its agenda.

Erdogan has pledged a new constitution that will be pro-individual, as well as ambitious economic growth. Indeed, economic advances and a strong democracy are crucial to furthering women’s rights and freedoms, but they also require women’s active participation.

The Women’s Platform of the Constitution – composed from more than 200 women’s organisations – advocates that not only gender but also “sexual orientation” and “gender identity” (to include groups such as gay and transvestite people) should be clearly included in any elaboration of equality and nondiscrimination.

Based on experience of how the Turkish judiciary can twist vague notions such as “public order”, “general health”, or “moral values” to the detriment of women, the platform argues that such subjective, arbitrary and abstract words be weeded out of legislation. Defining the “values of the Turkish society”, or what is moral, is not the business of the state.

The ruling party’s campaign slogan in this election was “Goal 2023”. The stated target is to make Turkey one of the world’s top ten economies by the 100th anniversary of the Turkish Republic.

Today in Turkey, less than one quarter of women of working age participate in the labour force, including those engaged in informal work or carrying out subsistence agriculture.

In a report analysing economic growth in the Central Anatolian province of Kayseri, the European Stability Initiative has noted that the role of women in the economy “may yet prove to be the Achilles’ heel of Central Anatolia’s ambitions to catch up economically with the European Union”.

In a nutshell, Turkey’s competitiveness will hit a ceiling if its labour market does not effectively capitalise on half of its human resources.

Tyranny of the majority

Though Erdogan stated that his party would govern the coming term with modesty, such a strong showing in the polls may fuel what some have already referred to as tendencies towards the tyranny of the majority.

It was reassuring to those critics that Kemal Kilicdaroglu, the leader of the main opposition Republican People’s Party (CHP), underlined in his post-election speech that his party would be a strong opposition looking out for freedoms, as well as equality between men and women.

The post-election political constellation suggests that the AKP and the CHP will need to work together to find lasting solutions for the complex and dynamic realities of women in Turkey.

Women’s rights, just like the freedom of expression and press, rest on the rule of law as well as checks and balances. It is essential that the judiciary be independent and that law enforcement agencies or state service providers do not act on the basis of political allegiances or subjective notions of morality.

Jumpstarting the EU integration process can help Turkey overcome its democratic deficits and inject confidence among the AKP’s domestic sceptics. Turkey should also avoid draining confrontations by looking to positive examples in Europe. It is possible for children to be protected from harmful internet content while respecting the right of adults to access legal adult content.

Welfare policies can ensure that being a mother is compatible with economic participation. Anti-discrimination mechanisms can be formulated to ensure that women – be they wearing short skirts or headscarves – are not harassed, stigmatised, or disadvantaged.

For a consensus to be struck, the goal must be to serve the naturally expanding range of different choices Turkish women make, not to impose one set of values or lifestyle.

The elections were but a small step forward for Turkish women. What matters now is that women both inside and out of the parliament can take part in shaping Turkey’s democratic contours and driving Turkey’s economic development.

Diba Nigar Goksel is editor in chief at Turkish Policy Quarterly and a senior analyst at the European Stability Initiative.

The views expressed in this article are the author’s own and do not necessarily represent Al Jazeera’s editorial policy, or the opinion of the European Stability Initiative. 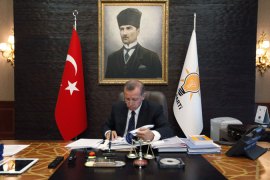 Carte blanche for Erdogan but can he deliver?

It remains to be seen whether Erdogan’s good intentions on tolerance and inclusiveness translate into concrete policies. 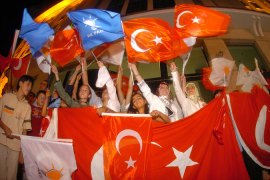 A triumph for Turkish democracy 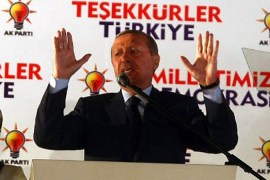 Turkish prime minister reaches out to opposition after winning half of votes but falling short of target of 330 seats.

The presidential elections that have changed Turkey

Crimea, Nagorno-Karabakh and the Gordian Knot