It was August of 1982. For seven weeks, Beirut had been sealed off, under attack by Israel from land, sea and air. Water and electricity supplies were cut. The Israelis had secured the airport and much of the southern suburbs. The Syrians had been defeated, their air force wiped from the Lebanese skies. Chairman Arafat and the PLO were seemingly at the mercy of their enemies, utterly dependent upon the international community to arrange an evacuation of their fighters which would bring an end to the carnage. Isolated and alone, all the leader of the Palestinian movement could do was look into the cameras and plead: “Where are the Arabs?”

In January of 1991, a nominally extensive international coalition of armed forces, led by the US but including many of the Arab countries, stood poised in northern Saudi Arabia to drive Saddam Hussein from Kuwait. It might have seemed that much of the Arab world was unified, and had engaged the United States and the international community in their cause to liberate a brutally occupied Arab country.

But in many of the Arab capitals, and to a seeming majority in the Arab street, the armies massed in the Saudi desert were anything but a sign of Arab strength and unity. For in point of fact, the Arab countries had had comparatively little to do with organising this UN-authorised, largely Western coalition. Many Arab nationalists from across the region asserted strenuously that the Arabs should not rely upon the Americans to sort out their difficulties, arguing in favour of an “Arab solution” to the crisis. In fact, however, this was mere posturing: An Arab solution to the crisis would have amounted to meek acquiescence in Saddam Hussein’s intra-Arab aggression. Those Arab countries most threatened by Saddam were not about to entrust their fate to regional Arab councils. They did not wish one day to be left, alone, to make the entreaty: “Where are the Arabs?”

Today, in the deserts along the coast of Libya, patriots are fighting to liberate themselves and their country from over 40 years of brutal, arbitrary misrule. Although tribal and other social divisions are no doubt playing a role in determining the fault lines of the civil war progressively settling over Libya, the primary motivating principles of the rebels have been clear: A desire for personal liberty, dignity and collective social empowerment. In this they have been transparently inspired by the courage of their brothers and sisters in Tunisia, in Egypt, and in many other parts of the Arab world. But as they attempt to withstand the onslaught of Muammar Gaddafi’s better-armed loyalists, and as those rebels most hard-pressed repeatedly plead for at least limited outside assistance, well they might ask: “Where are the Arabs?”

A new day is dawning in the Arab world. The revolutions underway have only just begun, and there is much to be sorted out in the countries where the democratic wave has taken hold. The response of other regional regimes, under less acute and immediate pressure, but still grappling with the challenge of socio-political changes now set perhaps inexorably in motion, remains very much to be seen. For all that its common outlook is rapidly evolving, the Arab world has a long way to go in coming to a firm consensus about what forms of rule will meet its minimum standards of acceptability.

Nonetheless, the latest indications of Arab intent in the context of Libya are positive, if as yet insufficient. A clear message has been sent by both the GCC and the Arab League that Gaddafi’s brutality toward his people is not acceptable, and has effectively delegitimised his government. The Arab nations have taken a clear stand in favour of a UN Security Council-imposed no-fly zone, and for urgent outreach to the National Transitional Council in Benghazi.

So far, perhaps, so good. Still, troubling signs of traditional passivity and diffidence remain. The Arabs are deferring action to the international community without suggestions as to how that action should be implemented, and with no firm commitment for their own direct involvement. The Arab League ministers aver that a no-fly zone should only be for the purpose of protecting Libyan civilians, and should end as quickly as possible. They continue to express concern over foreign intervention, while requesting precisely that. Their ambivalence is palpable.

At the same time, evidence is mounting that the international fixation on a no-fly zone may be a distraction from more urgently-needed action, and may in fact be counter-productive. First of all, it is not at all clear how great a threat is posed by Gaddafi’s air strikes, per se. While the military situation remains confused, it seems more likely that Gaddafi’s armour and artillery pose the more lethal danger to both rebel and civilian targets.

Moreover, imposition of a no-fly zone would be no simple task. Security Council agreement is far from assured: The Council is divided, and the Chinese, in particular, will do what they can to avoid approving international interference in internal Libyan affairs, out of fear of the negative precedent it might set for themselves. While others might well participate, the US, clearly, would have to take the lead.

Following its doctrine, the US would need to attack Libyan air defences first; the potential for significant collateral damage is considerable. The Americans would also require a helicopter-borne “combat search and rescue (CSAR)” capability to be in place for downed pilots before they would willingly act. And there are not nearly enough aircraft in theatre, yet, for an effective no-fly effort. Finally, it may simply be too much to suppose that the Americans, already engaged militarily in two Muslim countries, should now intervene in a third, when the risk to their already weak regional standing from those who may advocate international action now, but will no doubt quickly criticise any missteps, is so great.

If the Arab League is serious about ending Gaddafi’s menace to his people, they should focus on providing the National Transitional Council with the means to defeat him and his loyalist forces. The US, the EU and NATO have all made clear that they will only act with a clear legal mandate and with regional support. Therefore, it is up to the Arab nations to take the initiative.

It is very likely that the softness in the Arab League stance is a reflection of the divisions between those members on either side of the “democratic revolutionary” divide. Hobbled by the need for consensus, the League as a whole has gone about as far as it is capable; it is unlikely to take the tough decisions and hard actions necessary to counter Gaddafi’s resurgence. Those whose commitment to support of the rebellion is notably strong – Egypt and the GCC countries in particular – must be prepared to take the lead from here.

First, they should move quickly to recognise the Council in Benghazi as the legitimate government of Libya, and immediately request modification of the current UN arms embargo to exclude its forces. Meanwhile, a rapid assessment of the rebels’ military requirements is needed; these would likely include ammunition, anti-armour weapons, and perhaps rockets or artillery. It is clearly within the capabilities of at least some of the Arab countries to provide these rapidly by air, most likely with logistical assistance from the US or NATO. In this context, it would become far easier, and more palatable, for the US and NATO to provide overhead intelligence, perhaps off-shore jamming of Libyan military communications, and other forms of assistance to the transitional government.

We can begin to imagine that such an Arab-led initiative on behalf of the Libyans could help to build a new, cooperative relationship with America and the West – one which flows from Arab empowerment and collective resolve, and not, as in the past, from Arab weakness.

The time has come, in short, for the Arab regimes to demonstrate regionally and internationally the will and courage to act demonstrated by many of their own citizens domestically. Otherwise, they run the risk, in what is supposed to be a transforming Middle East, that when the last Libyan rebel lies bleeding in the desert, the boot of a pro-Gaddafi thug upon his neck, his last gasp will be: “Where are the Arabs?” 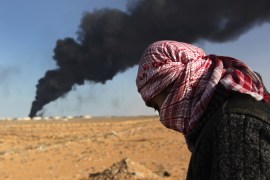 As NATO monitors the situation in Libya, Al Jazeera’s senior political analyst examines what is at stake. 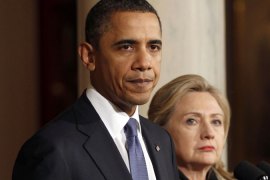 US backs no-fly zone over Libya 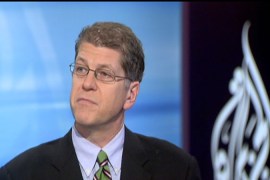 Clemens tells Al Jazeera that there are other ways to help Libyan opposition without no-fly zone.