Sunak promised to send the 14 Challenger 2 tanks to Ukraine following a call with Ukrainian President Volodymyr Zelenskyy on Saturday, according to a statement from his office.

The move makes the United Kingdom the first Western country to supply the heavy tanks Kyiv has been calling for. 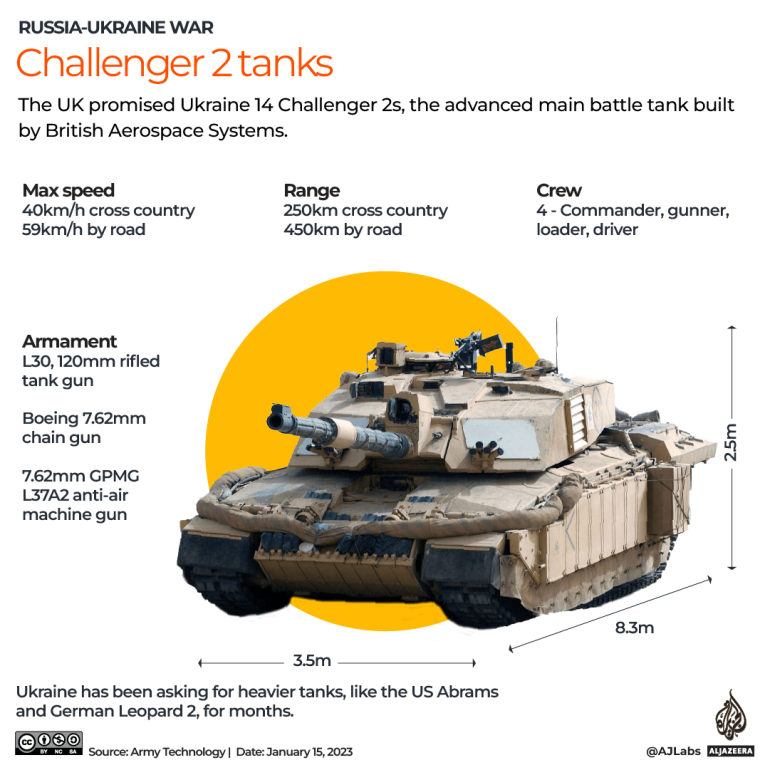 Sunak said the tanks were a sign of the UK’s “ambition to intensify our support to Ukraine”, according to a readout of a phone call with Zelenskyy.

The Ukrainian leader expressed his appreciation for the UK’s military support on Twitter, saying “the decisions that will not only strengthen us on the battlefield, but also send the right signal to other partners”.

Always strong support of the UK is now impenetrable and ready for challenges. In a conversation with the Prime Minister, @RishiSunak, I thanked for the decisions that will not only strengthen us on the battlefield, but also send the right signal to other partners.

“UK defence and security officials believe a window has opened up where Russia is on the backfoot due to resupply issues and plummeting morale,” the statement said. “The Prime Minister is therefore encouraging allies to deploy their planned support for 2023 as soon as possible to have maximum impact.”

The squadron of Challenger 2 tanks, which are battle tanks designed to attack other tanks, will go into Ukraine in the coming weeks. About 30 AS90s, which are large, self-propelled guns operated by five gunners, are expected to follow, it said.

Russia responded to the UK’s pledge by warning that it would only “intensify” the conflict.

“Bringing tanks to the conflict zone, far from drawing the hostilities to a close, will only serve to intensify combat operations, generating more casualties, including among the civilian population”, the Russian embassy in London said.

Ukraine has been asking to be supplied with heavier tanks for months, including the US Abrams and the German Leopard 2 tanks. However, some Western leaders have been treading carefully.

Poland and the Czech Republic have provided Soviet-era T-72 tanks to the Ukrainian army.

While Poland has also expressed readiness to give Leopard tanks, President Andrzej Duda underscored that the move would only be possible as a part of a larger international coalition of tank aid to Ukraine.

Earlier this month, France said it would send AMX-10 RC armoured combat vehicles to Ukraine, designated “light tanks” in France. The US and Germany announced the same week that they would send Bradley fighting vehicles and Marder armoured personnel carriers, respectively, for the first time.

The UK’s decision to provide the tanks came as Russian forces fired missiles at Ukraine’s capital and other cities around the country on Saturday, hitting critical infrastructure.

At least 12 people were killed and more than 64 wounded in the southeastern city of Dnipro, where a Russian missile attack destroyed a section of an apartment building, regional governor Valentyn Reznichenko said.

Seven children were among the wounded, the youngest three years old, he added, saying “the fate of 26 people is still unknown”.

Infrastructure facilities were also hit in the western Lviv region and northeastern Kharkiv. Kyiv, the capital, was also targeted.