Islamabad, Pakistan – Pakistan has managed to secure more than $10bn in pledges from the international community to rebuild itself after the widespread devastation caused by last year’s floods, which submerged a third of the country and killed more than 1,700 people.

In a tweet on Tuesday, Sharif said he was “deeply moved by the compassion on display” at the conference.

“The world witnessed yesterday how the nations can come together in a show of solidarity to create a model of win-win partnership to lift suffering humanity out of tragedy,” he posted. “Together we will rebuild lives and hopes.” 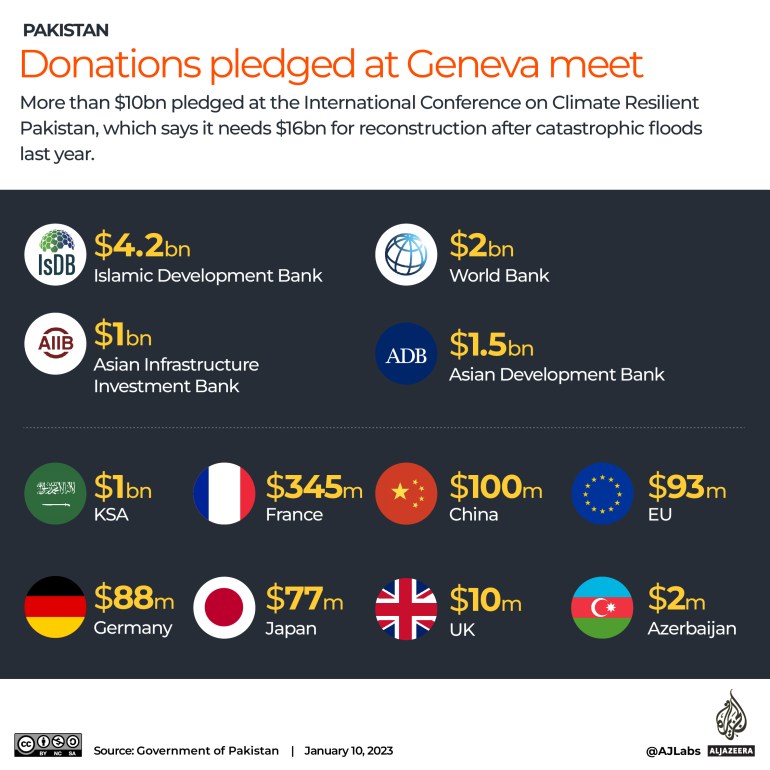 In another tweet on Tuesday, the Pakistani leader cited health, infrastructure losses and food insecurity as areas that needed immediate attention in the flood-ravaged nation.

“Housing, agriculture and livestock, as well as transport and communication sectors were most impacted” by the floods, a UN statement released after the conference said on Monday.

The statement said the floods – caused by melting glaciers and record monsoon rains – affected 33 million people and damaged 2 million homes and thousands of schools and hospitals. It said the catastrophe pushed an additional 9.1 million Pakistanis below the poverty line.

Fahd Husain, special assistant to the prime minister on public policy and strategic communication who was part of the Pakistani delegation in Geneva, said the conference was a success.

“The total amount of pledges that Pakistan has been able to achieve far exceeds what we had asked for. This is a huge success for Pakistan in every sense of the word,” he told Al Jazeera.

The world witnessed yesterday how the nations can come together in a show of solidarity to create a model of win-win partnership to lift suffering humanity out of tragedy. I was deeply moved by the compassion on display at Geneva Conference. Together we will rebuild lives & hopes

Nadeem Ahmed, a retired military officer and former chief of Pakistan’s National Disaster Management Authority (NDMA), said the meeting was the first step in a long journey and that the government must plan its rebuilding programme properly.

“The proof of the pudding is in the eating. Big money is often pledged, but, to convert this commitment into actual money will be a challenge. Donors want to know how their money is being spent. If underlying factors of disaster are not addressed in the development, the rebuilding process will not work,” he told Al Jazeera.

Climate crisis expert Ali Tauqeer Sheikh said he was optimistic after the declarations at the Geneva conference and that Pakistan had “put on a show of diplomatic solidarity in eyes of the world”.

“This was the first donor conference on climate change, and it has set a precedent to support victims of climate-induced disasters for low-middle income countries such as Pakistan,” he told Al Jazeera.

However, Reza Ali, an Islamabad-based independent researcher, said he was sceptical due to the nature of the money pledged in Geneva.

“While some of these pledges are grants, most of it remains in the shape of loans. I think people of Pakistan will find themselves further in debt,” he said.