Russian gas supplies to Europe will not resume until Western sanctions against Moscow are lifted, the Kremlin has said.

Dmitry Peskov, the Kremlin spokesman, said on Monday the sanctions were the sole reason behind Russia’s decision to shut the Nord Stream 1 (NS1) pipeline. Moscow initially said it was shutting the pipeline, which supplies gas to Europe, for maintenance.

“[Gas] pumping problems arose because of the sanctions imposed against our country and against a number of companies by Western states, including Germany and the UK,” Peskov was quoted as saying by the Interfax news agency. “There are no other reasons that could have caused this pumping problem,” he reportedly said.

“Sanctions that prevent the units from being serviced, that prevent them from being moved without appropriate legal guarantees … it is these sanctions imposed by Western states that have brought the situation to what we see now,” Peskov added.

Peskov’s comments came amid a deepening energy crisis across Europe that was further exacerbated after Gazprom, Russia’s state-run energy giant, announced on Friday that a three-day maintenance work due to an oil leak in one of the NS1’s turbines will extend indefinitely.

NS1, which has been operational since 2011, is the single biggest gas pipeline carrying gas between Russian and western Europe.

The European Union snapped back at Moscow’s move, with the European Commission spokesman saying that the complete halt of gas flows was made under “fallacious pretences”. EU officials have repeatedly accused Russia of intentionally stemming or reducing the flows in retaliation for Western sanctions and support of Ukraine.

The United States also accused Russia of using energy as a weapon, adding though that Europe will have enough gas to face the winter months.

“The US and Europe have been collaborating to ensure sufficient supplies are available. As a result of these efforts, European gas storage will be full by the critical winter heating season. We have more work to do,” a White House official told Reuters news agency. 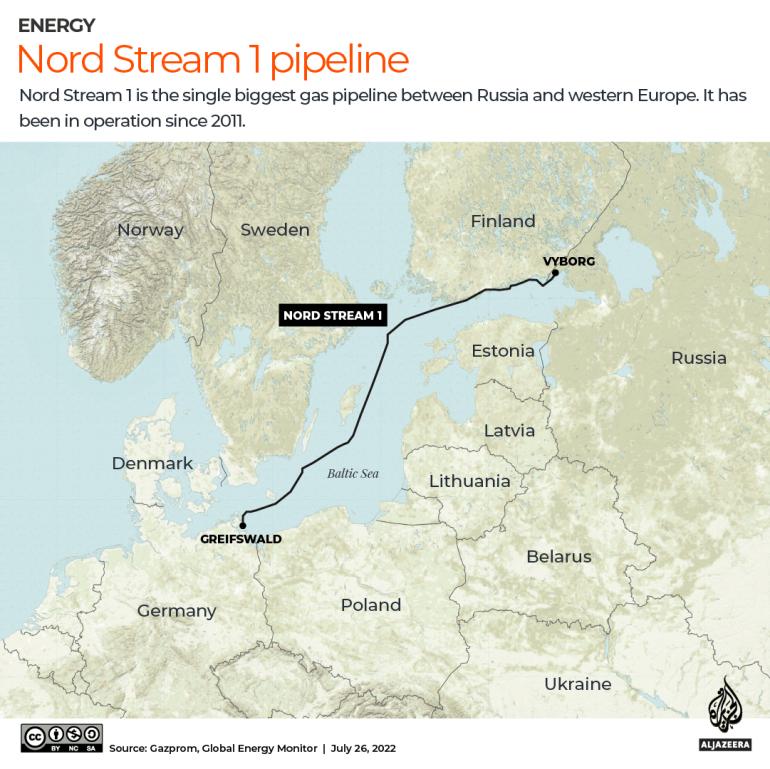 France’s President Emmanuel Macron said the EU needs to step up plans for renewable energy products and to reform its electricity market.

Germany, meanwhile, is actively looking to differentiate its source of energy. On Monday, the government said it would keep two nuclear plants on standby beyond the end of the year, in a policy U-turn. Germany had decided to abandon nuclear energy in 2011 under former Chancellor Angela Merkel in the wake of the Fukushima nuclear disaster in Japan.

The financial market immediately reacted to Russia’s decision to indefinitely close NS1, with the euro sinking on Monday to the lowest in 20 years – below $0.99. The value of the pound – with the British economy also vulnerable to rising gas prices – dropped 0.5 percent to a new two-and-a-half-year low of $1.1444.

“Gas flows have been curtailed even more than expected and we have already seen evidence of demand destruction weighing on activity,” said Michael Cahill, a strategist at Goldman Sachs. “We now expect the Euro to fall further below parity ($0.97) and remain around that level for the next six months,” he added.

That comes on top of some $35bn budgeted since January to soften the effect of sky-high electricity, gas and petrol costs.

Under the package, Rome extended to the fourth quarter existing measures aimed at cutting electricity and gas bills for low-income families as well as reducing so-called “system-cost” levies.

Finland and Sweden also announced on Sunday plans to offer billions of dollars in liquidity guarantees to energy companies.