Chechen leader Ramzan Kadyrov, an ally of Russian President Vladimir Putin, has criticised the Russian army’s performance after the loss over the weekend of Izyum, a critical supply hub in Ukraine’s eastern Kharkiv province.

In an 11-minute-long voice message posted to the Telegram messaging app on Saturday, he conceded the campaign was not going to plan.

“If today or tomorrow changes are not made in the conduct of the special military operation, I will be forced to go to the country’s leadership to explain to them the situation on the ground,” Kadyrov, the Kremlin-appointed leader of Chechnya, said.

“I’m not a strategist like those in the defence ministry. But it’s clear that mistakes were made. I think they will draw a few conclusions,” Novaya Gazeta Europe quoted him as saying, adding that all settlements will return to Russian control.

“We have our men out there, fighters prepared specifically for such situations. 10,000 more fighters are ready to join them. We’ll reach Odesa in the nearest future.”

The criticism came after the Russian army’s leadership appeared to be caught off-guard by Ukraine’s fightback against its invasion in the northeast.

Russian nationalists called angrily on Sunday for Putin to make immediate changes to ensure ultimate victory in the Ukraine war, a day after Moscow was forced to abandon its main bastion in northeastern Ukraine.

The swift fall of Izyum was Russia’s worst military defeat since its troops were forced back from the Ukrainian capital Kyiv in March.

As Russian forces abandoned town after town on Saturday, Putin was opening Europe’s largest Ferris wheel in a Moscow park, while fireworks lit up the sky over Red Square to celebrate the city’s founding in 1147.

Moscow’s almost total silence on the defeat – or any explanation for what had taken place in northeastern Ukraine – provoked significant anger among some pro-war commentators and Russian nationalists on social media.

As the defeats unfolded, the Russian defence ministry on Friday posted video footage of what it said were troops being sent to the Kharkiv region.

On Sunday the defence ministry said Russian forces had struck Ukrainian positions in the region with airborne troops, missiles and artillery.

Reporting from Kyiv, Al Jazeera’s Gabriel Elizondo said many pro-Russian Telegram channels are saying this is a defeat, “and one high-profile military analyst said that their troops are in an operational crisis and that the Ukrainians have seized the initiative in this war”.

Neither Putin, who is Russia’s supreme commander-in-chief of the armed forces, nor Defence Minister Sergei Shoigu had publicly commented on the defeat as of midday on Sunday.

“We take pride in Moscow, and love this city with its majestic antiquity and its modern and dynamic pace of life, the charm of its cosy parks, lanes and streets and abundance of business and cultural events,” Putin told Muscovites, according to a Kremlin transcript of his congratulatory message.

Putin, who has described his shock on being told as a KGB spy in East Germany that “Moscow is silent” as the Berlin Wall crumbled, said those who had fallen in the Ukraine operation had given their lives for Russia.

The defence ministry did not respond to a request for comment.

“They’re taking the piss,” wrote one prominent, pro-war military blogger on Telegram, who posts under the name of Rybar. “Now is not the time to shut up and say nothing … this seriously hurts the cause.”

On Saturday the ministry announced a “regrouping” that would move troops away from Kharkiv to focus on the Donetsk region further in Ukraine’s east – a statement that drew further anger from many Russian military bloggers.

Some of the pro-Kremlin war correspondents and former and current servicemen who have amassed large followings on Telegram accused the ministry of minimising the defeat. 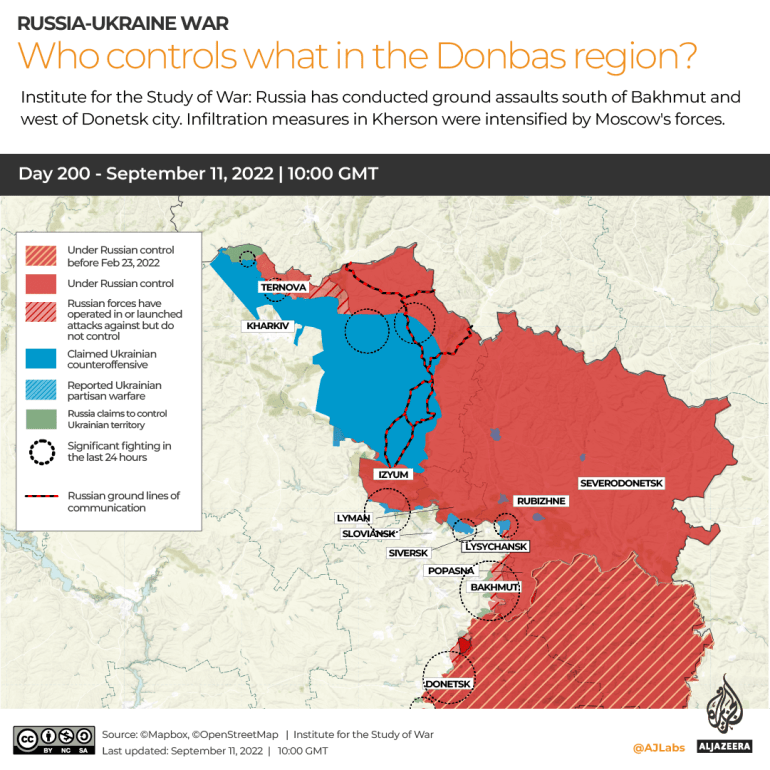 Igor Girkin, a nationalist and former FSB officer who helped launch a 2014 war in Ukraine’s eastern Donbas region, compared the collapse of one of the conflict’s principal front lines to the 1905 Battle of Mukden – a catastrophic defeat in the Russo-Japanese war that triggered Russia’s 1905 revolution.

Ukraine has hailed its rapid advance, which saw thousands of Russian soldiers flee, leaving behind ammunition stockpiles and equipment, as a turning point in the six-month-old war.

Girkin, who has been unsparing in his criticisms of the country’s top brass, dubbing defence minister Shoigu “the cardboard marshal”, has said repeatedly that Russia will be defeated in Ukraine if it doesn’t declare a nationwide mobilisation.

Nationalist anger at military failure is potentially a far greater problem for the Kremlin than pro-Western liberal criticism of Putin: opinion polls continue to show broad support for what Moscow calls the “special military operation”.

As the capital celebrated Moscow Day with street parties and concerts on Saturday, rumblings of disquiet even spread to Russia’s ordinarily subservient parliament.

Sergei Mironov, leader of the nominally opposition but Putin-loyal Just Russia party, said on Twitter that a fireworks display in honour of the holiday should be cancelled, in view of the military situation.

One message reposted on Telegram by the prominent war correspondent Semyon Pegov referred to the celebrations in Moscow as “blasphemous” and the refusal of Russian authorities to embark on full-scale war as “schizophrenic”.

“Either Russia will become itself through the birth of a new political elite … or it will cease to exist,” it read.