World Breastfeeding Week is celebrated from August 1 to 7 every year. Coordinated by the World Alliance for Breastfeeding Action (WABA), it highlights the importance of breastfeeding in tackling malnutrition, understanding inequality and the challenges mothers face across the globe.

According to the United Nations Children’s Fund (UNICEF), less than half of all newborns around the world (44 percent) are exclusively breastfed during the first five months of their lives.

However, despite the numerous health benefits for both babies and mothers, breastfeeding isn’t always easy. In the following infographic series, Al Jazeera looks at why breast milk is important and where breastfeeding is most prevalent.

Why is breast milk important?

Consisting of about 87 percent water, breast milk keeps the infant hydrated, manages body temperature, lubricates joints, and protects organs. It also consists of about 7 percent lactose – a sugar that provides the baby with energy, 4 percent fats (lipids) and the remaining 2 percent proteins and other bioactive components, which cannot be found in formula. 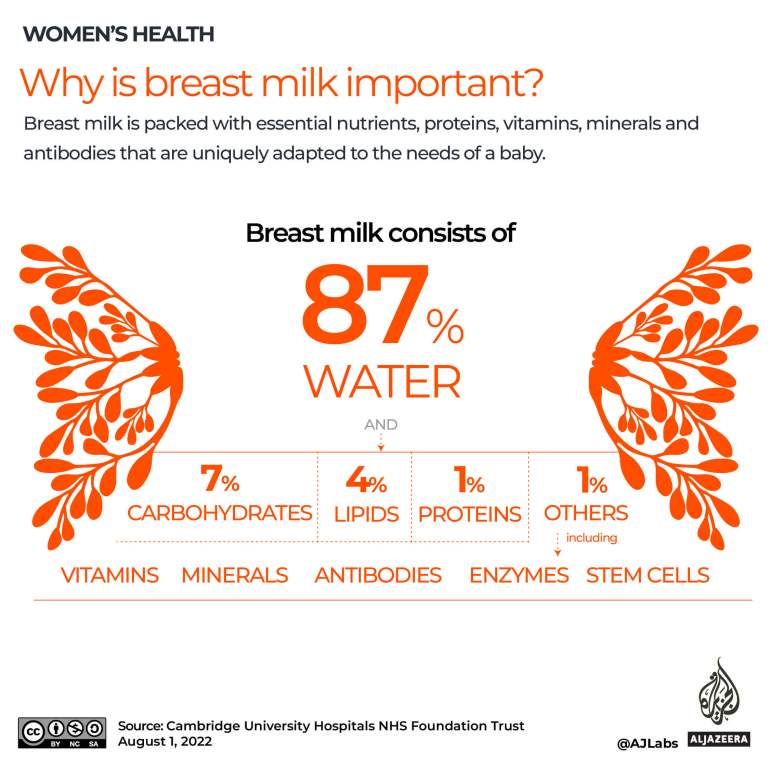 The production of milk by the mammary glands is stimulated by hormones. As the pregnancy comes to term, a woman’s body begins to produce the first breast milk, called colostrum, in the initial days after birth.

Colostrum is known as “liquid gold” because of its colour and benefits to newborns: it is packed with protein, vitamins, minerals and immunoglobulins (antibodies) that are essential to the growth and protection of a newborn. 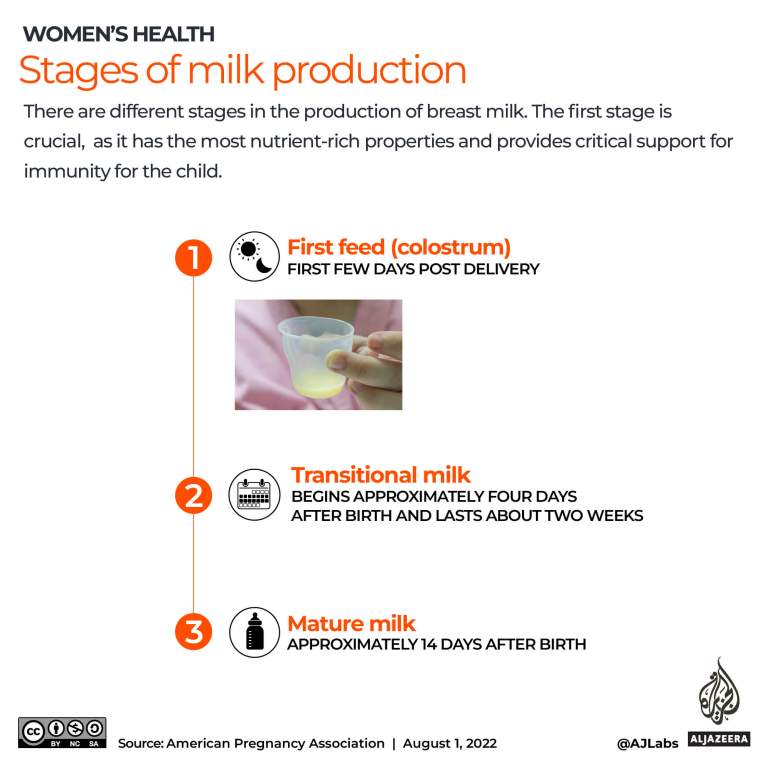 According to the United States Centers for Disease Control and Prevention (CDC), breastfeeding has several health benefits for babies and mothers and can help protect them from illnesses and diseases.

For babies, breastfeeding can reduce the risk of:

For mothers, breastfeeding can lower the risk of: 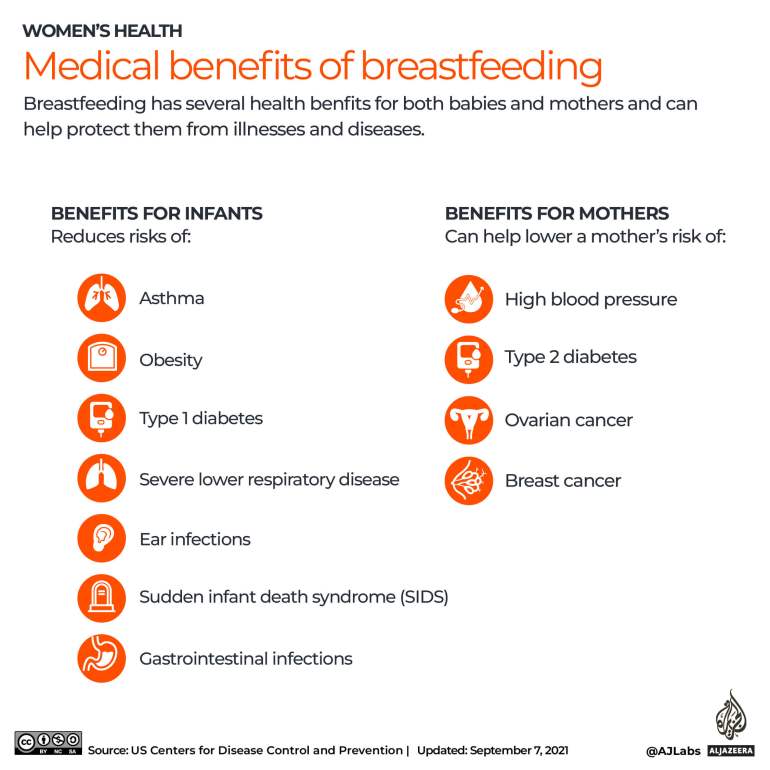 Breastfeeding is not always an option.

Amna Riaz is a young mother from Karachi, Pakistan who had a challenging pregnancy and now has a one-year-old daughter. Amna has Hashimoto’s disease, an autoimmune disorder affecting the thyroid gland. She is clinically obese and had irregular menstruation cycles. For her, even the pregnancy was a miracle.

“I lost 12kg (26.4 pounds) during my pregnancy and ended up giving birth via Caesarean section because I was surviving via drips, not solid food, with compromised kidneys,” she said.

“After one month of amazing [feeding] … I had to go through another whole new challenge to feed my baby,” she said.

After being told her baby wasn’t growing properly, Amna had to supplement her breast milk with a lactose-free formula (the baby was diagnosed as lactose-intolerant). Her own supply wasn’t enough.

“She wasn’t gaining weight at all [with] the formula milk … [combined] with breast milk,” she said.

The baby eventually had trouble latching onto her mother’s breast, Amna said, adding: “I completely weaned her off breast milk in six months.” 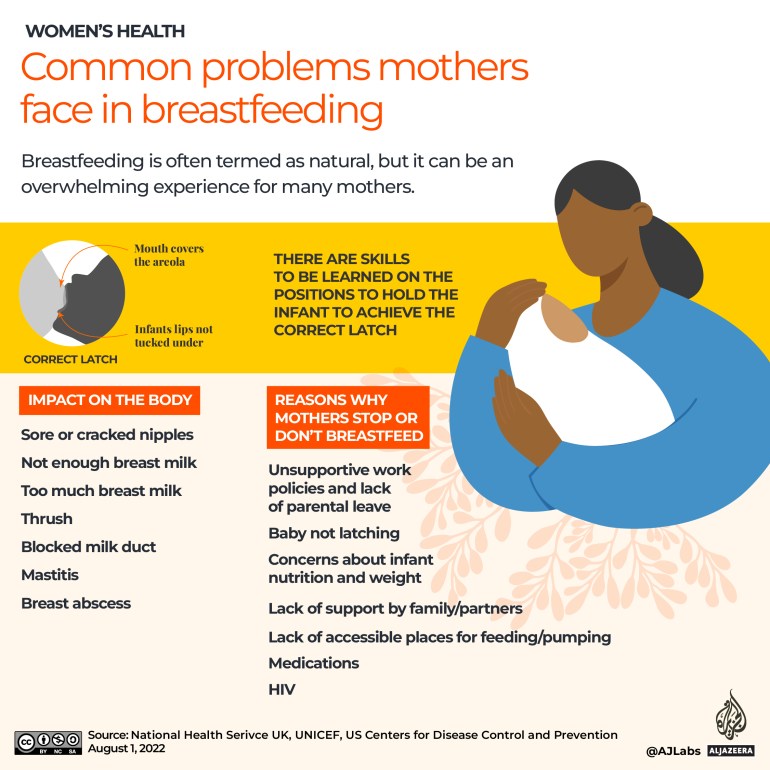 Yasmin, not her real name, a 29-year-old mother also based in Karachi, told Al Jazeera that breastfeeding was difficult for her and nothing felt normal after she gave birth.

“When my baby was brought to me six hours after [birth] a nurse tried to help me breastfeed,” she said. “With hardly any energy and feeling overwhelmed, I wasn’t able to feed her much at the hospital due to my physical and mental health at that time. But when I came home, I started to pump manually. It was taking so much of my energy. I could barely sit or walk properly in the first few days.”

In the weeks that followed, despite lactation counselling and medications to help boost her supply, Yasmin opted for formula instead of her own milk because her mental health was suffering and she felt switching to formula was her only option – in spite of pressure from her husband to feed “naturally”. She chose to put her mental health first, knowing she was slipping into postpartum depression.

But, “in case breastfeeding does not go as planned or if there are any hurdles in breastfeeding which cause stress, it can even contribute to kicking off postpartum depression”, she said.

Breastfeeding rates around the globe

According to data collected by UNICEF, South Asian countries have the highest exclusive breastfeeding rates for babies up to five months old: 57 percent.

At 55 percent, Eastern and Southern Africa have the second-highest breastfeeding rates followed by Eastern Europe and Central Asia (41 percent), Latin America and the Caribbean (37 percent) and West and Central Africa (37 percent).

One in three newborns (33 percent) in the Middle East and North Africa are exclusively breastfed.

A retired gynaecologist, who worked in Saudi Arabia for more than a decade and requested not to be named, told Al Jazeera most Saudi mothers tend to be young and have hired help to take care of the infant.

“In private hospitals, there used to be ready-made formula for children that was given freely,” she said. “Once the child is put on the formula in the bottle, there are lesser chances the child will take to suckling.” 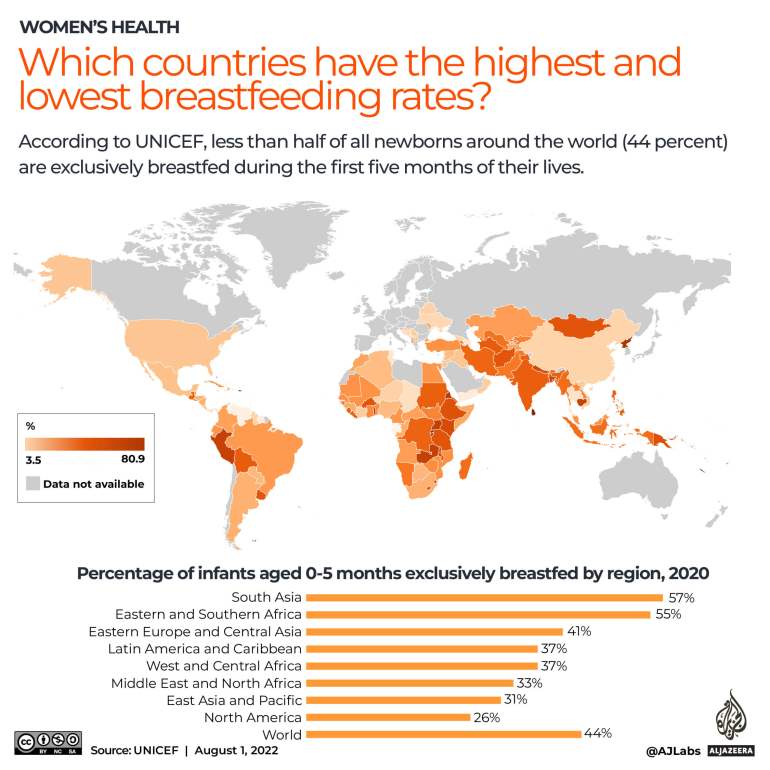 Globally, North America has the lowest rate of exclusive breastfeeding for babies within the first five months of their lives, with just over 26 percent.

Christina Tenorio, a doula and certified lactation specialist from the Pasadena Breastfeeding Center in California in the US, said parents tend to switch to formula mainly because breastfeeding becomes difficult.

“There are also parents who choose to formula feed or supplement because they have to return to work or they do not have the ability to exclusively breastfeed,” she said. “They may have other children or have other responsibilities that don’t allow for exclusive breastfeeding.”

“We definitely see a divide and the discrepancies and disparities in women of colour and the ability to pay. Many parents have to have two-income households, and many moms return to work in six to eight weeks. This will definitely decrease the longevity of breastfeeding.”