Heavy Russian strikes have hit the southern Ukrainian port city of Mykolaiv, killing the owner of one of the country’s largest grain-producing and exporting companies, the local governor has said.

Oleksiy Vadatursky, founder and owner of agriculture company Nibulon, was killed along with his wife in their home, Mykolaiv Governor Vitaliy Kim said on Telegram on Sunday.

With its headquarters in Mykolaiv, a strategically important city that borders the mostly Russia-occupied Kherson region, Nibulon specialises in the production and export of wheat, barley and corn, and it has its own fleet and shipyard.

Ukrainian President Volodymyr Zelenskyy described Vadatursky’s death as “a great loss for all of Ukraine”, saying the businessman had been in the process of building a modern grain market involving a network of transhipment terminals and elevators.

Three people were also wounded in the attacks on Mykolaiv, the city’s Mayor Oleksandr Senkevych told Ukrainian television, adding that 12 missiles had hit homes and educational facilities. He earlier described the attacks as “probably the most powerful” on the city of the entire five-month-old war.

Up to 50 grad rockets hit residential areas in the southern city of Nikopol on Sunday morning, Dnipropetrovsk Governor Valentyn Reznichenko wrote on Telegram. One person was wounded.

Meanwhile, Ukrainian forces hit Russia’s Black Sea Fleet headquarters in Russian-held Sevastopol early on Sunday, the Crimean port city’s Governor Mikhail Razvozhayev told Russian media. Five staff members were wounded in the attack when what was presumed to be a drone flew into the courtyard at the headquarters, he said.

The battlefield reports could not be independently verified.

The Sevastopol attack coincided with Russia’s Navy Day, which Russian President Vladimir Putin marked by announcing that the navy would receive what he called “formidable” hypersonic Zircon cruise missiles in coming months. Those missiles can travel at nine times the speed of sound.

Putin did not mention the conflict in Ukraine during a speech after signing a new naval doctrine that cast the US as Russia’s main rival and set out Russia’s global maritime ambitions for crucial areas such as the Arctic and the Black Sea.

Anatol Lieven, senior research fellow on Russia and Europe at the Quincy Institute of Responsible Statecraft, told Al Jazeera that despite Putin’s announcement, the Russian navy will struggle to compete with the US and NATO fleets.

“The Russian navy, surface navy at least, is outnumbered four to one by NATO European members alone and by far more by the American navy – so in terms of numbers, there is no contest,” Lieven said.

“Where Russia is equal to the US is in nuclear weapons, which is why President Putin repeatedly emphasises Russia’s missile technology because this is the one area in which Russia is still a superpower.”

“The Russian navy has always been considered to have had a relatively high morale and good commanders but it cannot realistically fight NATO … The only area where the navy is actually in action is in the Black Sea and Russia cannot reinforce the navy in the Black Sea.” 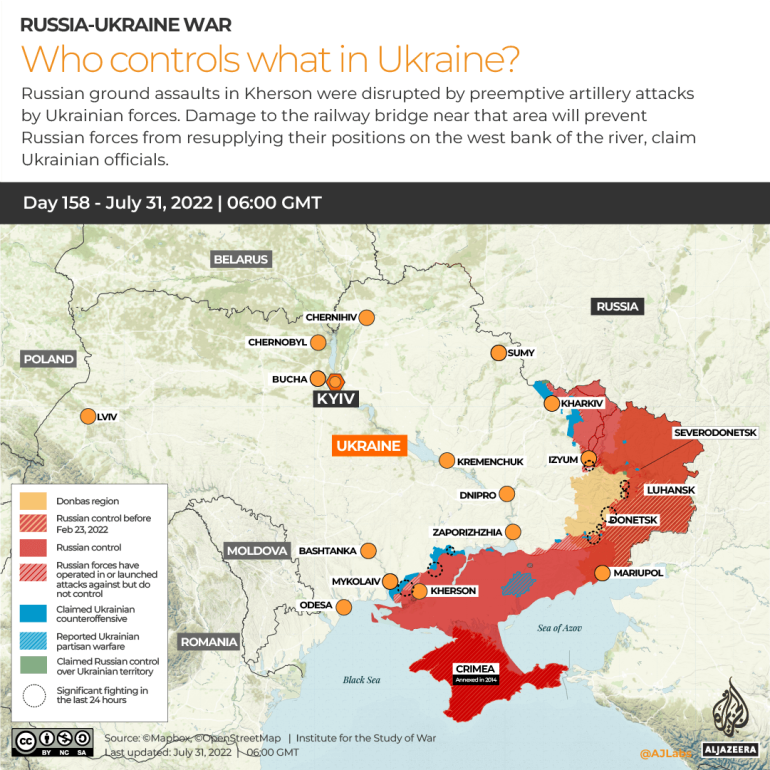 No permission yet for ICRC visit

Russia said on Sunday that it had invited United Nations and Red Cross experts to probe the deaths of dozens of Ukrainian prisoners held by Moscow-backed separatists.

Ukraine and Russia have traded accusations over a missile strike or explosion early on Friday that appeared to have killed dozens of Ukrainian prisoners of war in the front-line town of Olenivka in eastern Donetsk.

The International Committee of the Red Cross (ICRC) on Sunday condemned the attack and said it had not yet received permission to visit the site, while adding it was not its mandate to publicly investigate alleged war crimes.

“Families must receive urgent news of and answers on what happened to their loved ones,” it said in a statement.

“The parties must do everything in their power, including through impartial investigations, to help determine the facts behind the attack and bring clarity to this issue.”

The Russian defence ministry had published a list of 50 Ukrainian prisoners of war killed and 73 wounded in what it said was a Ukrainian military strike with United States-made artillery.