By Alia Chughtai and Marium Ali

June 8 is World Ocean Day – an annual global event to recognise the major role oceans play in our lives and the challenges faced in preserving this precious environment.

Oceans cover more than 70 percent of our planet’s surface and are home to an estimated 700,000 to one million species. Oceans also produce more than half of the world’s oxygen.

But oceans absorb up to 90 percent of the heat from greenhouse gases and every year at least eight million tonnes of plastic waste end up in the world’s oceans along with various harmful chemicals and human waste. These human-made pollutants settle at the bottom of the ocean and cause great harm to marine life and their natural habitat.

Marine life is further endangered by overfishing and bottom trawling – an industrial fishing practice that involves dragging heavy nets over the seafloor to catch fish – leading to permanent damage to marine ecosystems.

In the following infographic series, we look at eight marine species listed as critically endangered by the International Union for Conservation of Nature (IUCN), which means they face an extremely high risk of extinction in the wild. 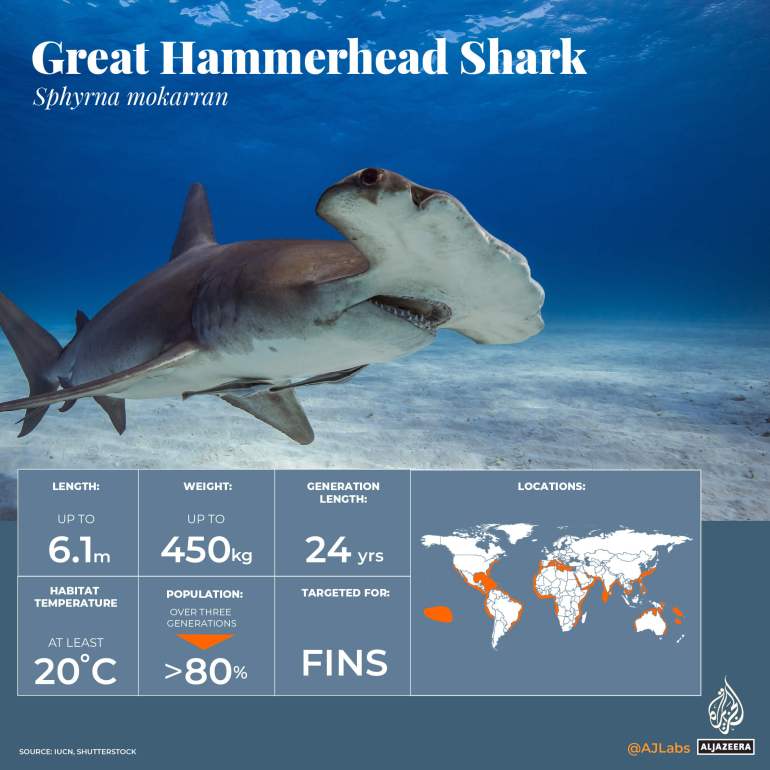 The great hammerhead shark is the largest of the iconic hammerhead species, known for their distinctive mallet-shaped heads. The aggressive predator can reach a length of 6.1 metres (20 feet) and weigh up to 450kg (1,000lbs).

These apex predators can be found worldwide and typically stay in warm coastal waters above 20C (68F). On average, they live for about 20-30 years and can reproduce every two years.

The great hammerhead is often targeted for its fins and is often caught as a bycatch during fishing. The IUCN has classified these sharks as critically endangered. 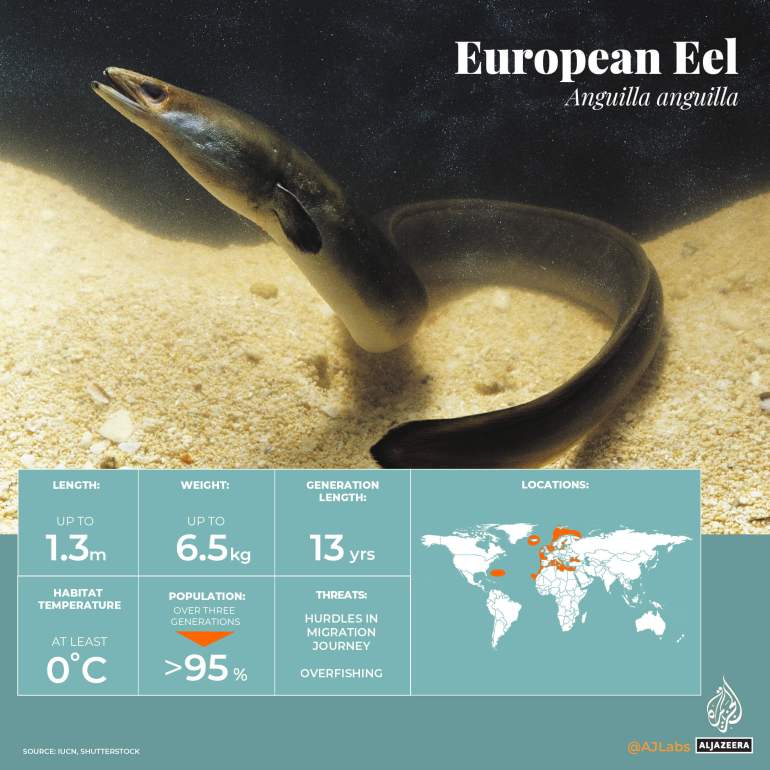 The nocturnal species are found in the northern hemisphere from the northern reaches of Finland all the way down to the shores of Egypt. European eels can live up to 85 years.

These fish begin their life on the bottom of the Sargasso Sea, near the North Atlantic archipelago of Bermuda. After hatching, the leaf-like larvae migrate via ocean currents to the freshwater rivers of Europe where they spend most of their adult life. Upon reaching sexual maturity, European eels migrate from freshwater streams back to the Sargasso Sea to spawn and die.

Physical hurdles in the eel’s migration routes, including the construction of dams and hydroelectric turbines and the threat of overfishing, have caused a steady decline in the eel population. 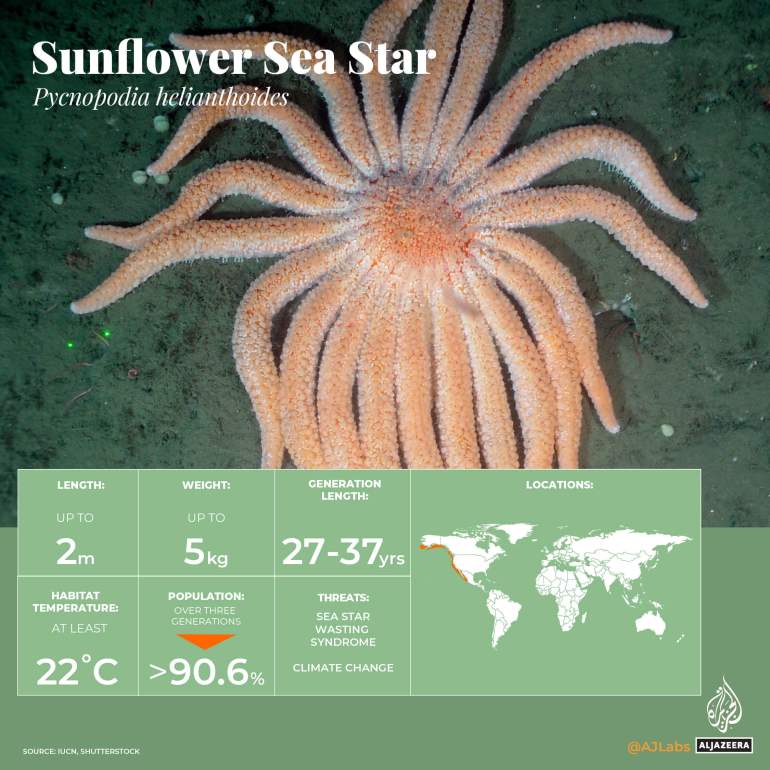 The sunflower sea star is one of the largest sea stars in the world. Commonly referred to as starfish, these marine invertebrates can have between 16 and 24 limbs, which can each grow up to a metre (39 inches) in length.

The sunflower sea star is found along the Pacific coastline of North America.

According to the IUCN, there has been a 90 percent global decline in the sunflower sea star population during the past 30 years. One of the reasons for this sharp decline is sea star wasting syndrome, which is a wasting disease that can lead to the eventual fragmentation of the sea star.

The origin of sea star wasting syndrome is not yet clear, but there is evidence that warming temperatures have played a role. Until now, there has been no natural recovery from the disease. The sunflower sea star was declared critically endangered by the IUCN in 2020. 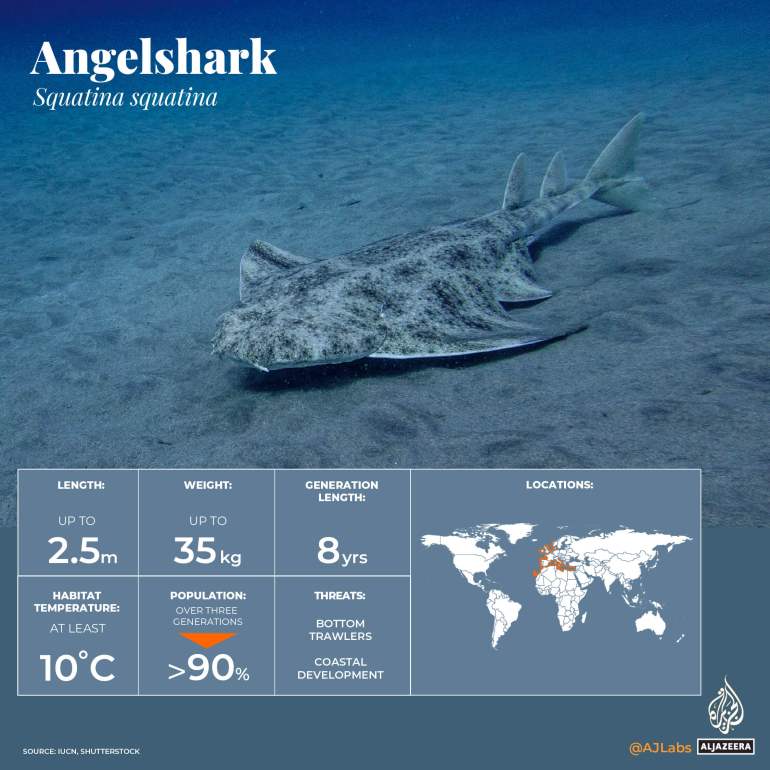 The angelshark is a nocturnal bottom-dwelling shark species found in the eastern Atlantic and the Mediterranean Sea.

The distinctive flat shark can grow up to 2.5 metres (eight feet) and lives 15 years on average.

As angelsharks live and feed on the bottom of the sea, they have become very susceptible to becoming accidentally caught in bottom fishing gear.

The angelshark population has contracted by more than 80 percent during the past century. 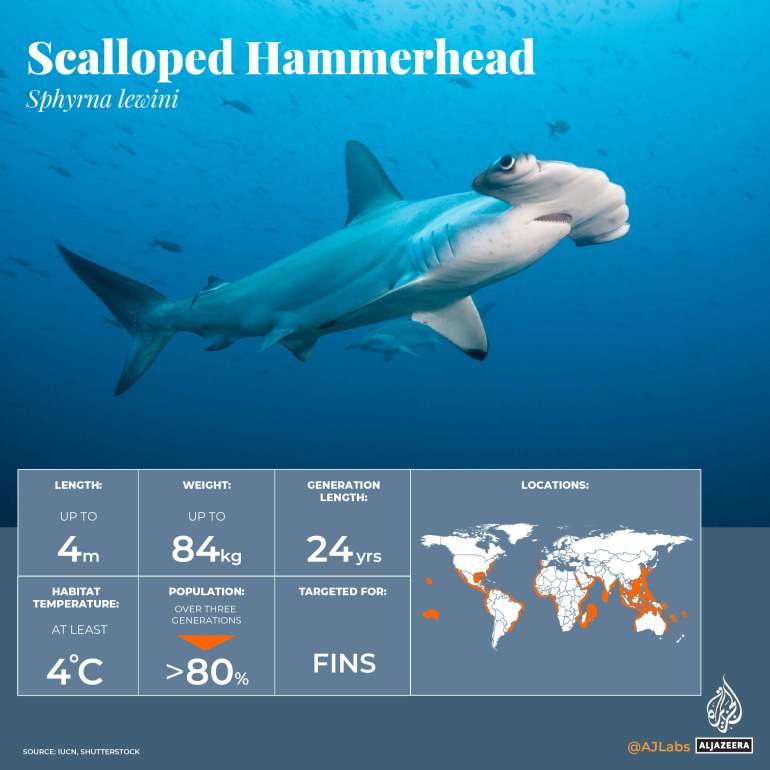 The scalloped hammerhead shark is found worldwide in tropical to warm temperatures.

Scalloped hammerheads are usually non-aggressive and shy when approached by divers and are often targeted for their meat and fins.

According to the IUCN, scalloped hammerhead numbers have declined across all the oceans except the waters of the northwest Atlantic and the Gulf of Mexico, where the population has stabilised due to the implementation of various bans and treaties. 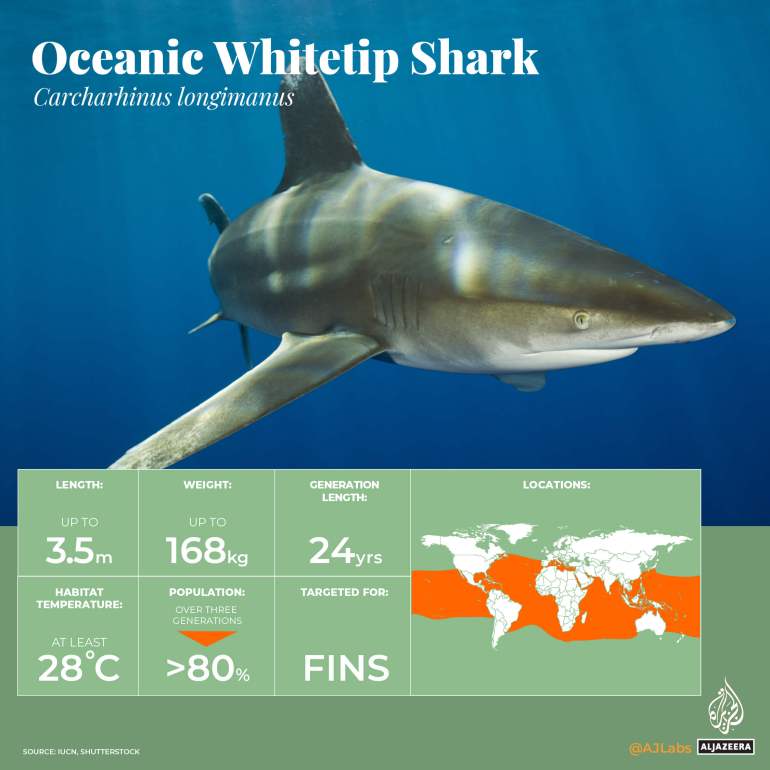 The oceanic whitetip is another critically endangered shark. Found most commonly in warmer tropical and subtropical waters across the world, this predator can reach 3.5 metres (11.5 feet) in length and live up to 25 years.

This open-ocean shark cannot pump water across its gills and must constantly swim forward with its mouth slightly open to get enough oxygen from the water. If they stop moving, they die.

The oceanic whitetip is widely sought in commercial fisheries for its flesh and fins which are highly desirable for shark fin soup. 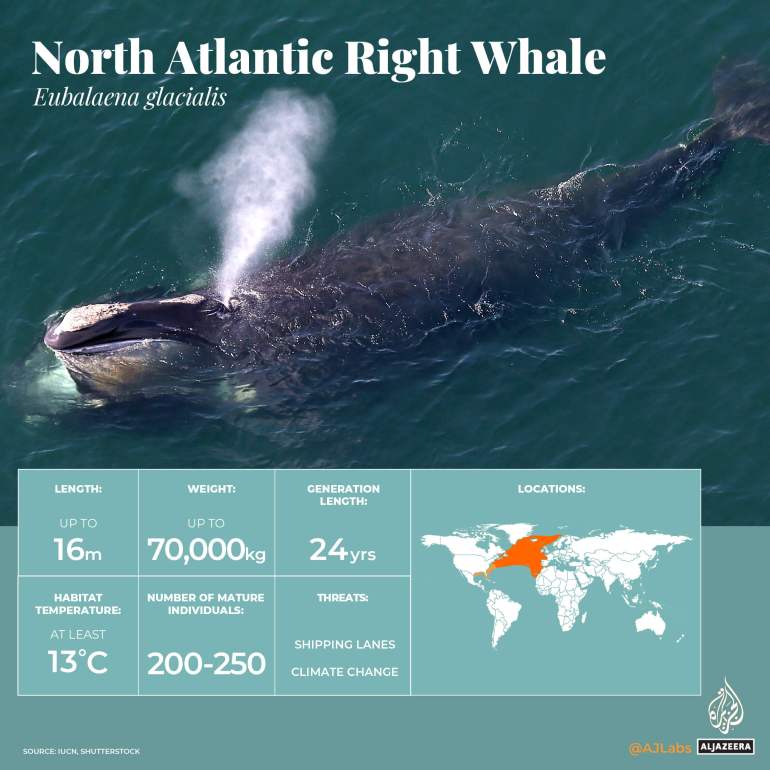 This critically endangered species is no longer legally hunted, and the most serious current threat is death and injury from entanglements in fishing gear and ship strikes off the east coast of North America.

By the end of 2018, the estimated number of North Atlantic right whales alive was just 409, of which fewer than 250 were mature. 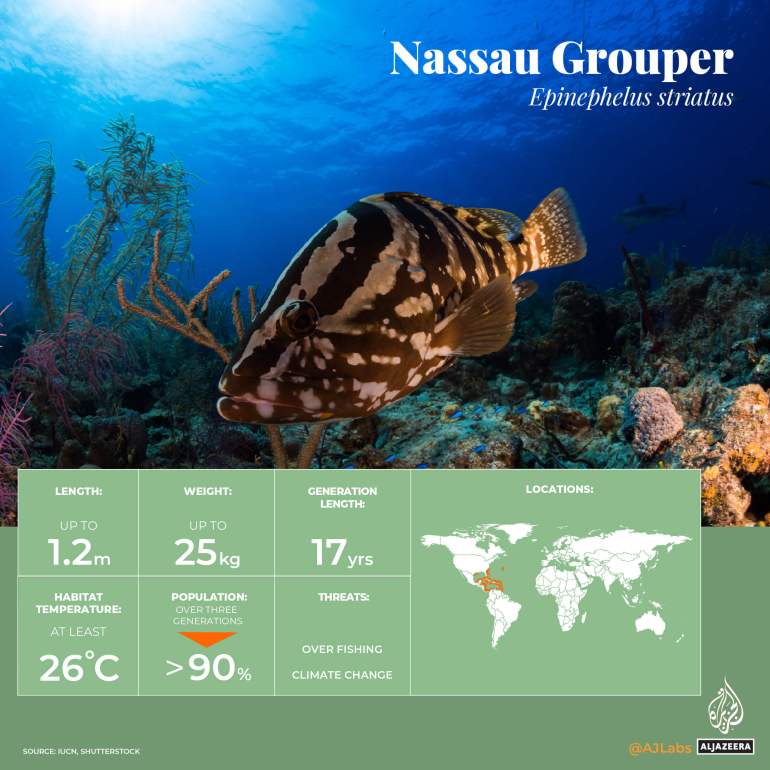 The Nassau grouper is a warm-water reef fish typically found across the Caribbean Sea and the Gulf of Mexico.

The distinctive bicolour-patterned fish is highly valued by commercial and recreational fisheries with overfishing leading to a 80-90 percent reduction in the population since the 1980s.

In 2016, this species, too, was added to the IUCN’s critically endangered list.