As international aid agencies struggle to provide rapid relief aid to earthquake-hit Afghanistan, civil society groups in the country are mobilising to step in and support the survivors.

More than 24 hours after being hit by a magnitude 5.9 earthquake on Wednesday, residents in remote areas of Paktika and Khost provinces in eastern Afghanistan continued to dig out bodies from the debris. More than 1,000 people have been killed and about 2,000 wounded, with officials warning that the casualty toll is likely to rise.

Aid is beginning to trickle in to the affected areas, but relief efforts have been hampered by poor communications and basic roads and impoverished Afghanistan has been struggling with a dire humanitarian crisis since the Taliban took over last August.

The Taliban government has called for international help as it struggles to help the survivors, many of whom lack essentials such as food, water and shelter.

Several international agencies have dispatched aid to the locations and are attempting to secure further support. The World Food Programme said it has deployed 18 trucks to the earthquake-affected areas carrying emergency supplies, including High Energy Biscuits and mobile storage units, with plans to send emergency food to an initial 3,000 households.

The World Health Organization said it will provide 10 tonnes of medical supplies sufficient for 5,400 surgeries and medical treatments covering 36,000 people for three months. The UNHCR also dispatched core relief items consisting of tents, blankets, plastic sheeting, and kitchen sets among other items for 600 families, according to a statement by the United Nations Office for the Coordination of Humanitarian Affairs.

Meanwhile, the Norwegian Refugee Council (NRC) is providing “unrestricted and unconditional multipurpose cash assistance” in a one-off payment of 28,000 afghanis ($314) to affected families, among other supplies.

However, the provision of international relief has been slow as international agencies are struggling to operate in the challenging terrain, Roby said. While the affected areas are remote and mountainous, poor weather conditions over the last few days have also hampered the emergency response.

“The lack of phone signal has made it incredibly difficult to maintain contact with the field teams … even our satellite phones aren’t working in the area,” she said, adding there are also concerns over the underlying risk from landmines laid during four decades of war.

“These provinces had experienced heavy fighting in the past and have not been officially cleared of unexploded ordinance,” Roby added.

Additionally, banking challenges posed by the US sections are complicating the humanitarian response for many organisations, Roby said, adding that despite the humanitarian waivers for their work, NRC experiences blockages and delays from banks when transferring funds to Afghanistan.

“Despite the challenges listed above, we are able to mobilise emergency humanitarian responses. However, serious questions remain over how we support these communities to rebuild their lives in the context of an economic crisis, ensuring that they can find some secure, permanent place to live, where they can earn enough money to survive and to send their children to school,” she added.

Crumbling institutions, lack of existing resources, and infrastructure weakened by war and financial crises have also slowed down the response to what is the deadliest earthquake in the country in two decades.

“We have so far received support from some of the international agencies and Pakistan has also sent aid like medicine and food, as well as tents and water supply. But we need a lot more to match the urgency,” Sharafat Zaman Amar, spokesman for Taliban’s minister of public health, told Al Jazeera. 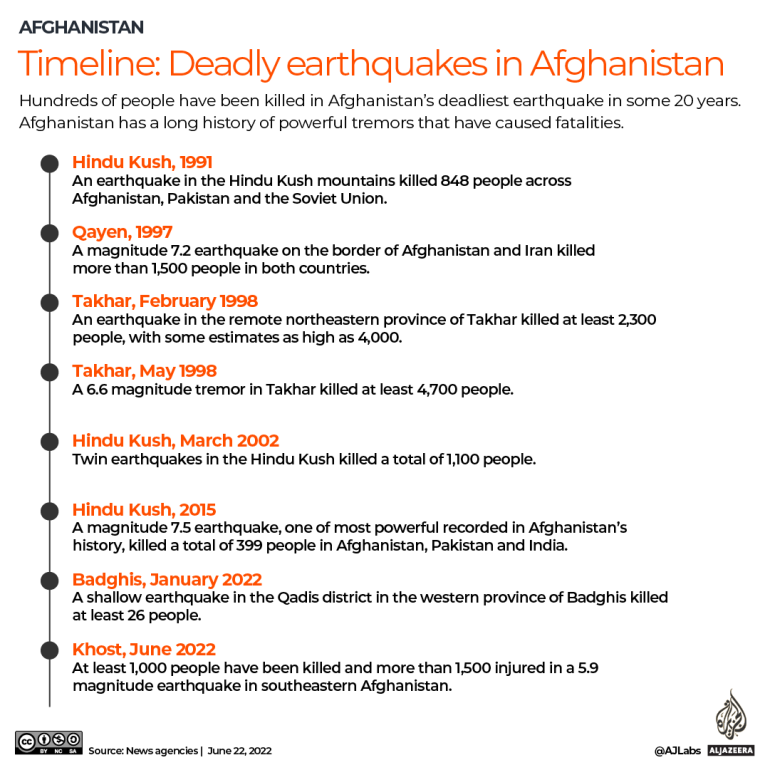 Meanwhile, as international agencies struggle to provide timely support, Afghan civil society groups, which have adapted to some of the existing challenges, have mobilised emergency responses to provide some relief to survivors.

Save Afghans From Hunger, an organisation that has been addressing the ongoing food scarcity in Afghanistan, has been operating fundraising campaigns since last August – with much of the donations coming from Afghans in the diaspora – and will provide food, water, and other essential supplies to earthquake survivors.

“We already had moved some of the money into Afghanistan because we were planning on launching bakeries and bread distribution campaigns so we had funds on the ground which were directed to the earthquake response,” founder of the organisation, Obaidullah Baheer, told Al Jazeera.

However, moving money to Afghanistan has been difficult for some time now, he said.

“There were many people who wanted to send more money to their loved ones but lack of a banking system and limited alternative options due to the sanctions add to the misery of the people who are already destitute,” he said.

Similarly, Aseel, an Afghan e-commerce initiative that has turned into a humanitarian lifeline for thousands of families, has sent its emergency response team to the disaster-affected areas to identify those in need in order to provide the first round of 1,000 packages containing food, hygiene products and other essentials.

“We have also launched a grand challenge to respond to the needs aiming to raise $150,000 to procure essentials for families,” Madina Matin, media coordinator at Aseel, told Al Jazeera. They have so far raised nearly $35,000.

In 2019, Aseel’s founders created an e-commerce platform to help local artisans sell their products to a wider market, allowing for international transactions. They created new financial and supply chains that proved useful when the country’s banking systems and other institutions crumbled last August as the Taliban seized power.

Their technology-focused solutions that allow those outside Afghanistan to support families in the country through a mobile-based application have been successful in supporting hundreds of families since the Taliban takeover.

However, like Baheer, they too are facing challenges due to the sanctions and the problems in the financial sector making it hard for businesses and aid organisations to operate.

“With the collapse of the [last Afghan government], the financial sector also took a major hit and the banks and other financial service providers stopped or heavily reduced their operations in the country. The banks limited their working hours, as well as the amount of money people could withdraw from their accounts, waiting hours and days in certain cases,” Matin said.

“Aid organisations are doing all they can, but with one of their hands tied behind their back,” Baheer added.

Baheer works with an existing network of volunteers in Paktika and Khost, and is trying to buy as much food and other essentials as close to the affected areas as possible for easier delivery.

“We didn’t have access to Gayan which was one of the drastically hit areas, so we reached out to hospitals in Gardez and Urgun, and providing meals to patients there. We are also preparing a support package for 100 families that will be taken to Gaian once it is accessible,” he said.

However, a lot more effort and aid are needed.

“There are 33 villages that have been completely destroyed and we need a lot more support for the people in Paktika and Khost,” Amar said.

He said mobile health teams have been dispatched to the areas but lack resources to address the magnitude of the casualties.

“People are also suffering from lack of sufficient food, water, tent, emergency medicines and basic supplies. We request all humanitarian organisations to help our nation in this disaster,” Amar said.