Kyiv, Ukraine – Every year, on May 9 Russia celebrates “Victory Day”, a commemoration of the USSR’s defeat of Nazi Germany in World War II.

Russian President Vladimir Putin has previously used the anniversary to project Moscow’s moral superiority over Nazism – and anyone he opts to label a “Nazi”.

In the lead-up to Russia’s Victory Day this year, observers speculated about the potential contents of Putin’s address. Some experts predicted Putin would express triumph regarding Russia’s invasion of Ukraine.

Others suggested the Russian president could use his speech to declare the annexation of the Donbas region in eastern Ukraine, where pro-Russian separatists declared breakaway republics in 2014.

There were also warnings that Putin could announce a national mobilisation effort to boost the ranks of the Russian military.

But the president’s address to 11,000 servicemen in Red Square on Monday did not mention the word “Ukraine” once.

“He avoids the word because it is associated with trouble, defeat, thwarted hopes and expectations,” Volodymyr Fesenko, of the Kyiv-based Penta think-tank, told Al Jazeera.

When Putin launched a full-scale invasion of Ukraine on February 24, the Kremlin said the goal of the “special military operation” was to “denazify” and “demilitarise” its neighbour.

But in the weeks since then, Russian forces have suffered a series of setbacks on the battlefield and been forced to withdraw forces from several fronts. The Ukrainian defence ministry has estimated that some 25,000 Russian servicemen have been killed. Russia’s most recent estimate in late March was more than 1,300 Russian forces had been killed.

One analyst noted that Putin’s speech appeared to show that Moscow has not decided on a plan on how to end the war in Ukraine.

“Judging by how Putin placed his assessments, Russia so far has no decision about how to exit the war,” Igar Tyshkevich, a Belarusian analyst based in Kyiv, told Al Jazeera.

“They didn’t achieve their goals, but don’t know what to do instead,” he said.

Many analysts believe Russia’s initial goal was to achieve a quick victory after the initial invasion, but that this strategy failed for a number of reasons, including poor supplies of food, fuel and ammunition for servicemen and inaccurate expectations that Ukrainians would welcome Russian invaders as “liberators”, among others.

Russia has since said it would refocus its military efforts on eastern Ukraine, but its progress has remained unsteady amid fierce Ukrainian resistance.

In Monday’s address, Putin focused on the continuing offensive in the eastern Donbas region, mentioning it five times in his speech.

“These days, you are fighting for our people in Donbas,” he said, a reference to the Russian-speaking Ukrainians in the industrial region – who, according to the Kremlin, needed its “protection”.

Putin spoke about the Donbas “militias” who fight on Moscow’s side, and called Ukraine’s war against the separatists “a punitive operation”.

He urged the audience to bow their heads for “the elderly, women and children of Donbas, peaceful civilians who died of merciless shelling, barbaric strikes of neo-Nazis”.

But Russian forces have yet to make significant gains in Donbas, where the areas under Ukrainian control are heavily fortified.

Moscow’s troops have also made little headway in their attacks on Ukraine’s second city Kharkiv, which lies 40km (25 miles) from the Russian border in northeastern Ukraine and where most of the population still speaks Russian.

For weeks, the city has been pummelled by cruise missiles, bombers and mortars, leading to hundreds of reported civilian deaths.

“In the past three days, the shelling got louder,” marketing expert Ihor Saldyha told Al Jazeera in mid-April.

But in early May, most of Russia’s forces had withdrawn from areas around Kharkiv, the Ukrainian military reported. 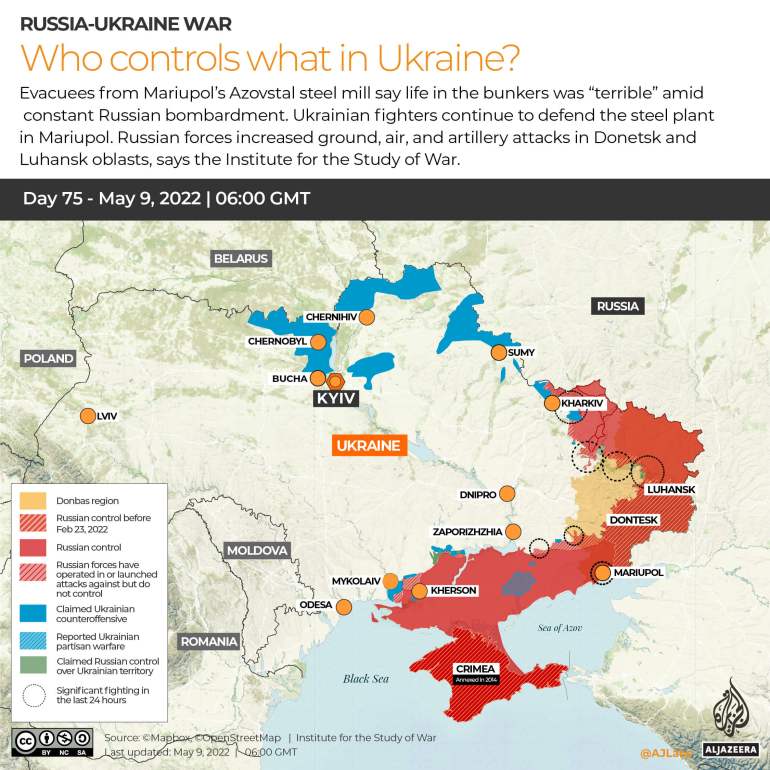 Kyiv-based analyst Aleksey Kushch told Al Jazeera that Ukraine also serves as a bitter reminder of Putin’s larger failure to recreate the Soviet Union, whose 1991 collapse he has previously described as “one of the biggest geopolitical disasters” of the 20th century.

“As a nation that ruined his plans to create the new union of Russia, Belarus and Ukraine in 2014, Ukraine is simply deleted from [the Kremlin’s] ideological constructions to minimise imperial phantom pains,” Kushch said.

He said Putin still hopes to announce the USSR’s restoration – on the defunct Soviet state’s centenary on December 30.

“The new empire will have to be sewn together from the leftovers” such as separatist regions in Ukraine, Georgia and Moldova, as well as Belarus that had already agreed to create a “union” with Russia, Kushch said.

Hours after Putin’s speech, a top British defence official accused him of “mirroring” Adolf Hitler’s policies and “hijacking” the memory of Soviet troops who died while fighting the Nazis.

“Through their invasion of Ukraine, Putin, his inner circle and generals are now mirroring the fascism and tyranny of 77 years ago, repeating the errors of last century’s totalitarian regimes”, UK defence secretary Ben Wallace said. Vladimir Putin is “mirroring” the fascism of Hitler and must face the same fate as the Nazi top command, the secretary added.

An aide to Ukrainian President Volodymyr Zelenskyy said it is Russia that needs to be “de-Nazified” – by Ukraine.

“Ukraine symbolises the end of the bravado Russia has had for the past 20 years,” Mykhailo Podolyak said. “Ukraine will definitely prove its key mission – to ‘de-Nazify’ the Russian Federation.”

And Zelenskyy said Ukraine would inevitably triumph over Russia – and have two victories to celebrate.

“We are fighting for the freedom of our children, and hence we will win,” he said in a television address broadcast minutes before Putin’s speech. “And very soon, Ukraine will have two victories. And someone will have none left.”