Russian forces have pounded the southern Ukrainian port of Odesa with missiles, killing one person, as Ukraine’s President Volodymyr Zelenskyy called on the international community to take immediate steps to end the Russian blockade of the country’s ports in order to allow wheat shipments and prevent a global food crisis.

In Odesa, the major Black Sea port for exporting agricultural products, missiles hit a shopping centre and a depot, killing one person and injuring five others, Ukraine’s armed forces said on Facebook on Monday. Video footage from the scene showed fire and rescue workers combing through piles of rubble, dousing still smoking wreckage.

Ukraine and its allies have intensified efforts to unblock ports or provide alternate routes for exporting its significant crops of grain, wheat and corn, a lifeline for many countries relying on these staples. 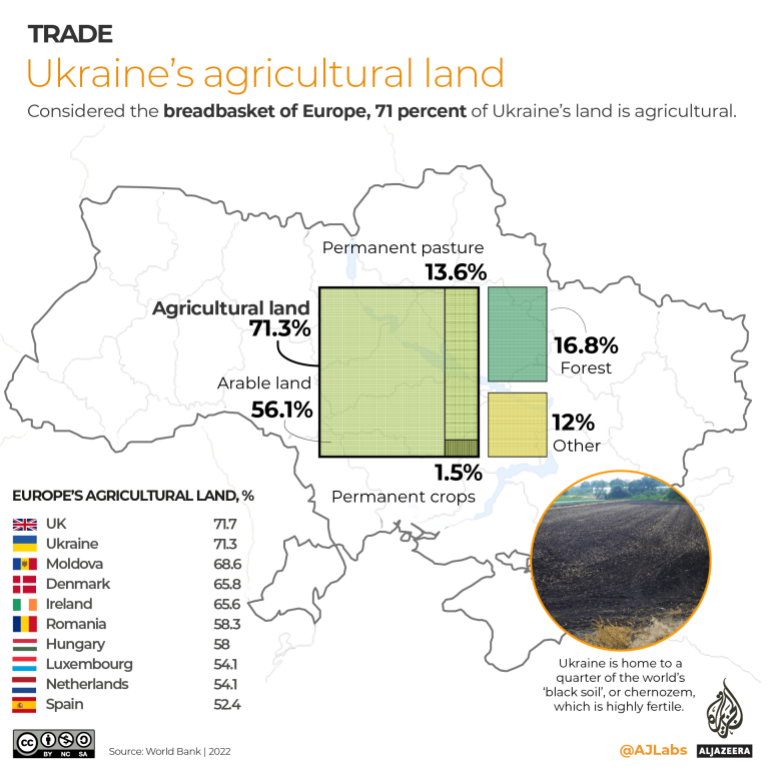 “For the first time in decades, there is no usual movement of the merchant fleet, no usual port functioning in Odesa. Probably this has never happened in Odesa since World War II,” Zelenskyy said.

“Without our agricultural exports, dozens of countries in different parts of the world are already on the brink of food shortages. And over time, the situation can become downright terrible … This is a direct consequence of Russian aggression, which can be overcome only together – by all Europeans, by the whole free world. It can be overcome by putting pressure on Russia, by effectively forcing Russia to stop this disgraceful war.”

European Council President Charles Michel visited Odesa on Monday, and his meeting with Ukrainian Prime Minister Denys Shmyhal was interrupted by a missile attack. Their talks continued in a bomb shelter, according to Shmyhal’s official Twitter account.

Michel said he saw silos full of grain, wheat and corn unable to be exported.

“This badly needed food is stranded because of the Russian war and blockade of Black Sea ports, causing dramatic consequences for vulnerable countries. We need a global response,” he said.

Air raid sirens could be heard across several regions of Ukraine early on Tuesday, including Luhansk, Kharkiv and Dnipro.

Serhiy Haidai, the governor of Luhansk, said the region was attacked about two dozen times in the 24 hours prior to early Tuesday.

“During the day on May 9, the Russians fired en masse on all possible routes out of the region,” he said.

Houses were destroyed in Sievierodonetsk and Lysychansk and in the village of Shypilovo, where people remained trapped, there was an attack on an inspecting crew that wounded one person, Haidai added.

In the town of Bogodukhov, northwest of Kharkiv, four people were killed and several homes were destroyed in Russian attacks on Monday, local media quoted Kharkiv officials as saying.

Ukraine’s defence ministry said Russian forces backed by tanks and artillery were conducting “storming operations” at Mariupol’s Azovstal plant, where hundreds of Ukrainian defenders have held out through months of siege.

Mariupol lies between the Crimean Peninsula, seized by Moscow in 2014, and parts of eastern Ukraine under the control of Russia-backed separatists. Full control of the city would allow Moscow to link the two areas.