Ukraine has called on civilians in the eastern Luhansk region to flee Russian shelling after officials said more than 50 people trying to evacuate by train from a neighbouring region were killed in a missile attack.

Air raid sirens rang out across much of the east of Ukraine on Saturday morning, officials said, as Luhansk Governor Serhiy Gaidai, in a televised address, urged people to leave as Russia was amassing forces for an offensive.

Ukraine President Volodymyr Zelenskyy called for a “firm global response” to Friday’s missile attack on a railway station crowded with women, children and the elderly in Kramatorsk, in the Donetsk region.

The city mayor, who estimated 4,000 people were gathered there at the time, said at least 52 died.

Russia’s defence ministry denied responsibility for the attack, saying in a statement the missiles that hit the station were used only by Ukraine’s military and that Russia’s armed forces had no targets assigned in Kramatorsk on Friday.

All statements by the Ukrainian authorities on the attack were “provocations”, it said. 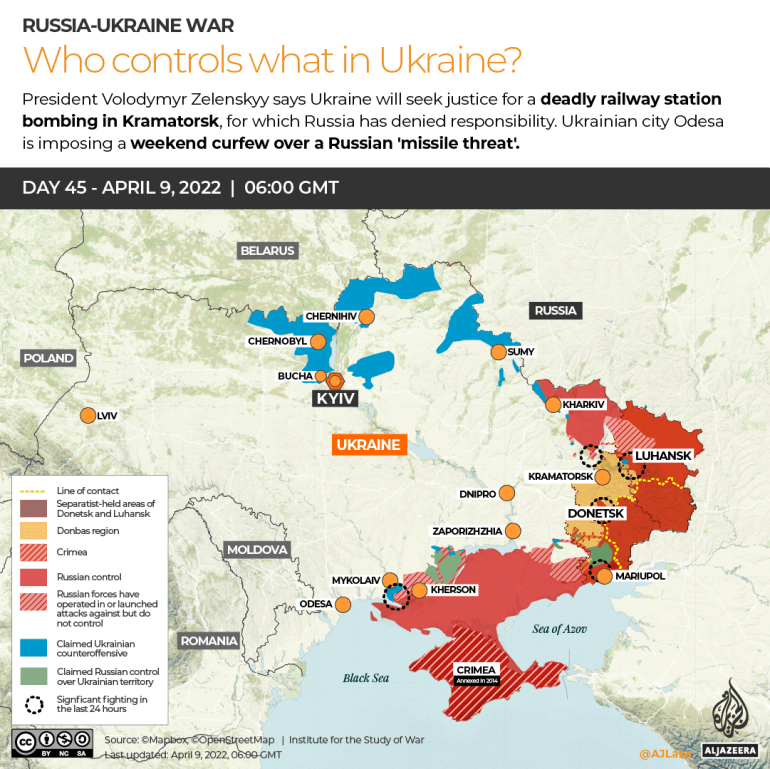 Russia launched its military offensive against Ukraine on February 24. More than 4.3 million people have fled Ukraine to neighbouring countries.

At least 1,600 civilians have died so far, according to the United Nations, which fears the real number to be higher.

Casualties on the Russian side have been hard to assess. Ukrainian officials said on Saturday that more than 19,000 Russian soldiers have been killed since the start of the war.

Russia’s defence minister said on March 25 – its most recent update – that 1,351 of its soldiers have been killed in combat, while 3,825 were wounded.

Experts warn though that figures by both parties cannot be fully trusted as Kyiv is likely to inflate them to boost the morale of its troops, while Russia is probably downplaying them.

In a rare admission, Kremlin spokesman Dmitry Peskov said on Thursday that Russia has suffered “significant losses” in Ukraine amounting to a “huge tragedy” for the country.

Moscow insists that it is pursuing a “special military operation” to demilitarise and “denazify” Russia’s southern neighbour.