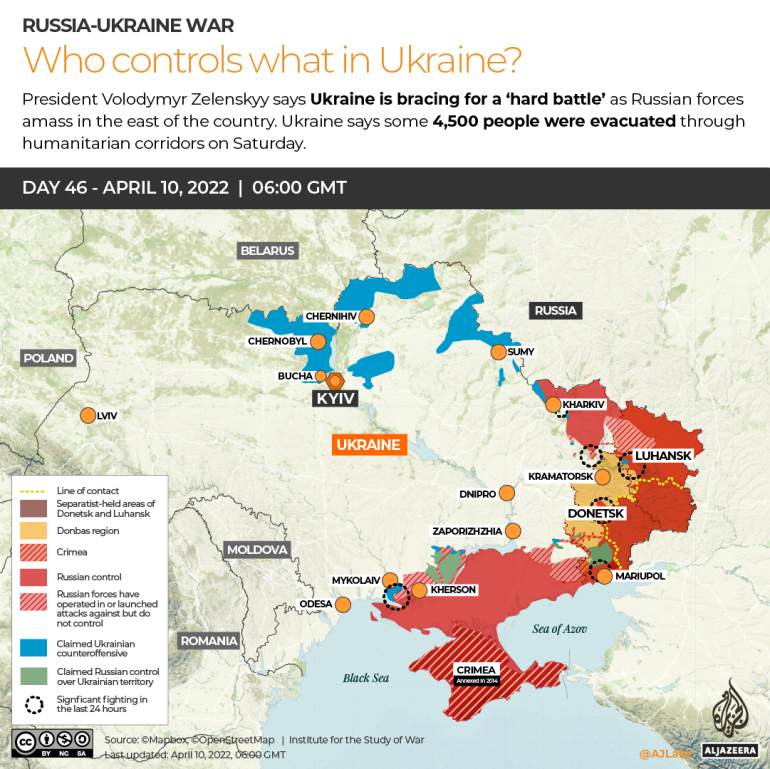 This live blog is now closed, thank you for joining us. Follow our continuing coverage of the war in Ukraine here.

These were the updates on April 10:

A total of 2,824 people were evacuated from Ukrainian cities through humanitarian corridors on Sunday, including 213 residents of the besieged southern port city of Mariupol, Deputy Prime Minister Iryna Vereshchuk said in an online post.

Weekend bombardments in eastern Ukraine killed 10 civilians and wounded 11 others around Kharkiv, the region’s governor said on Sunday.

Saturday’s bombardments hit four towns around and to the southeast of Kharkiv, Oleg Synegubov posted on Telegram, adding that one of those killed was a child.

US will supply Ukraine with ‘the weapons it needs’ against Russia

US national security adviser Jake Sullivan has said that the United States is committed to providing Ukraine with “the weapons it needs” to defend itself against Russia as Kyiv seeks more military aid from the West.

“We’re going to get Ukraine the weapons it needs to beat back the Russians to stop them from taking more cities and towns where they commit these crimes,” Sullivan said on ABC News’ This Week.

Austrian Chancellor Karl Nehammer will meet President Putin in Moscow on Monday, the Federal Chancellery in Vienna has announced.

Sullivan did not cite any evidence. He said targeting civilians “lies at the feet of the Kremlin” during an interview on CNN’s State of the Union.

The airport in the central Ukrainian city of Dnipro has been completely destroyed in fresh Russian shelling, a local official said.

“There has been another attack on Dnipro airport. There is nothing left of it. The airport itself and the infrastructure around it has been destroyed. Rockets keep flying and flying,” the head of the city’s military administration, Valentin Reznichenko, said on Telegram.

He added that authorities were seeking to clarify information about the victims.

The United Nations High Commissioner for Refugees has updated the number of refugees fleeing Ukraine since the war started, bringing the total to some 4.5 million.

About 2.6 million of those fled at least initially to Poland and more than 686,000 to Romania, the UN said.

Russia’s Orthodox Church calls on people to rally around authorities

The head of Russia’s Orthodox Church has called on people to rally around the country’s authorities.

Patriarch Kirill has previously made statements defending Moscow’s actions in Ukraine and views the war as a bulwark against a Western liberal culture that he considers decadent.

“Let the Lord help us unite during this difficult time for our Fatherland, including around the authorities,” the Interfax news agency quoted Kirill, 75, as saying at a sermon in the Russian capital.

“May the authorities to be filled with responsibility for their people, humility and the readiness to serve them even if it costs them their life,” added the patriarch, a close ally of President Vladimir Putin.

He said once the population unites around the authorities, “there will be genuine solidarity and the ability to repel enemies both external and internal …”

“I can confirm that we are in talks [about the sale],” Nad said in a televised debate. He did not give further details.

The Zuzana 2 howitzer, a modernised version of an older model, is using 155mm rounds and has an effective range of 40-50km (25-31 miles) depending on ammunition type.

President Volodymyr Zelenskyy has discussed over the phone with German Chancellor Olaf Scholz “anti-Russian sanctions, defense and financial support for Ukraine”, he said on Twitter.

The two leaders also stressed that “all perpetrators of war crimes must be identified and punished”, Zelenskyy said.

Had a phone conversation with @OlafScholz. We emphasized that all perpetrators of war crimes must be identified and punished. We also discussed anti-Russian sanctions, defense and financial support for Ukraine.

Speaking in front of tens of thousands of people in Saint Peter’s Square in Vatican City, Pope Francis called for a truce in Ukraine.

“Put the weapons down!” he said at the end of a Palm Sunday service. “Let an Easter truce start. But not to rearm and resume combat but a truce to reach peace through real negotiations,” he added.

Two people have been killed in Russian shelling in Derhachi, a city in the northeastern province of Kharkiv, regional Governor Oleh Sinegubov said on his Telegram channel. He added that 66 artillery attacks were carried out across several regions in the past 24 hours.

What is Russia’s ‘plan B’ in Ukraine?

After being pushed out of north Ukraine, Russia is now refocusing its forces on taking the east in what one military expert describes as an “all-or-nothing gamble”. 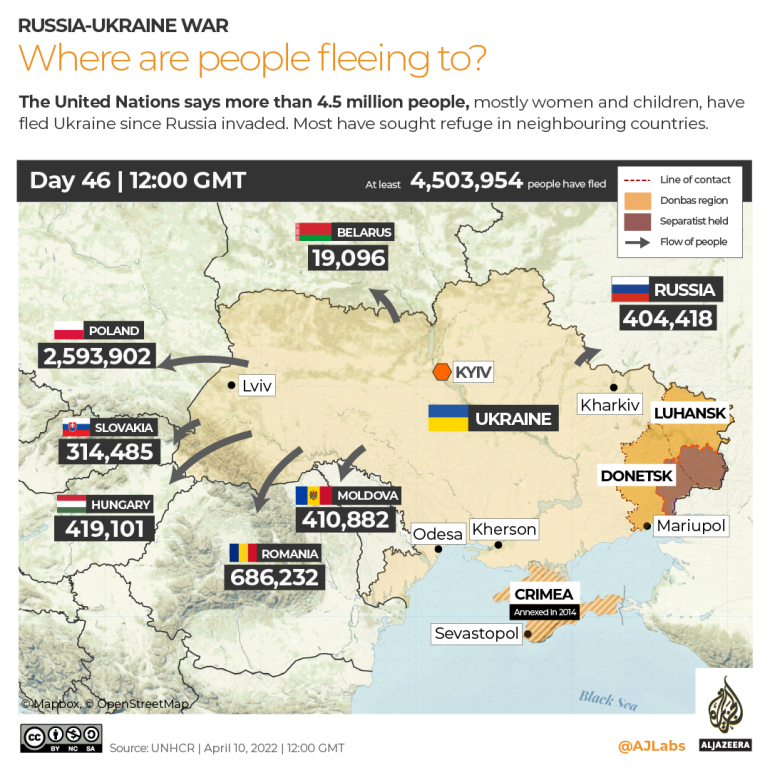 Moskalkova said that among those handed to Russia were four employees of the Rosatom State Atomic Energy Corporation and soldiers. “Early this morning they landed on the Russian soil,” Moskalkova said in an online post.

Nine humanitarian corridors have been agreed upon for civilians to evacuate from the eastern regions of Donetsk and Luhansk, Ukraine’s Deputy Prime Minister Iryna Vereshchuk said on her Telegram channel.

“All the routes for the humanitarian corridors in the Luhansk region will work as long as there is a ceasefire by the occupying Russian troops,” Vereshchuk said. Evacuations will take place with both private vehicles and buses, she added.

A grave with dozens of civilians has been found in the village of Buzova near Kyiv, a local official has said.

Taras Didych, head of the Dmytrivka community, said the bodies were found near a petrol station and the number of dead had yet to be confirmed.

The latest reported mass grave comes as Ukrainian forces regain control of areas surrounding the capital, discovering the damage Russian troops left behind as they focus their offensive on the east.

“Ukraine will prevail and rise back even stronger,” said the European Union’s top diplomat Josep Borrell. “And the EU will continue to stand by you, every step of the way,” he added on Twitter.

#Ukraine will prevail and rise back even stronger. And the EU will continue to stand by you, every step of the way.

Since the war started, the SES said on its Telegram channel, 46,275 explosive devices have been defused.

Russian forces are seeking to bolster troop numbers with personnel discharged from the military service since 2012, British intelligence has said in its latest bulletin.

It added that Russia has been trying to recruit forces from the unrecognised Transnistria region of Moldova.

Find out more about the UK government's response: https://t.co/8yjYrVmzHe

Russian shelling has hit a school and two high-rise buildings in the city of Sievierodonetsk, Luhansk, a local authority said.

“Fortunately, no casualties,” the region’s governor Serhiy Gaidai wrote on Telegram, adding that two elderly people were rescued, while one person was wounded in Dnipro after an industrial facility was hit.

Finland is preparing for a potentially historic decision “before midsummer” on whether to apply to join NATO as a deterrent against Russian aggression.

The Nordic nation of 5.5 million has traditionally been militarily non-aligned, in part to avoid provoking its eastern neighbour, with which it shares a 1,300km (830-mile) border.

But Russia’s invasion of Ukraine on February 24 saw public support for joining NATO double from 30 to 60 percent, according to a series of polls.

Ukrainian troops have refused to surrender the city, though much of it has been razed.

Dozens have gathered in front of the Russian embassy in Santiago to denounce the Russian invasion of Ukraine, with protesters – including Ukrainian residents of Chile – unfurling a large banner in the colours of the Ukrainian flag.

Some lay down, clutching stuffed animals to honour the child victims of the war. A large banner read, “Stand with Ukraine.”

“We are doing everything possible to help my people,” said Alina Prus, a Ukrainian resident in Chile. “Being here for many of us is a very emotional situation. Several of us have our families who are now living the horror of what war means.”

“On the order of President Zelenskyy, the third prisoner exchange took place. Twelve of our servicemen are returning home, including one female officer,” Deputy Prime Minister Iryna Vereshchuk said on Telegram.

Fourteen civilians, including nine women, were also on their way home, she added.

Zelenskyy: ‘It is important to stop this war’

The Ukrainian president says he is committed to pressing for peace as he renewed his plea for countries to send more weapons ahead of an expected surge in fighting in the country’s east.

He spoke in an interview with The Associated Press a day after at least 52 people were killed in an attack on a train station in the eastern city of Kramatorsk.

“No one wants to negotiate with a person or people who tortured this nation. It’s all understandable. And as a man, as a father, I understand this very well,” Zelenskyy said. But “we don’t want to lose opportunities, if we have them, for a diplomatic solution”.

Ukrainian football club Shakhtar Donetsk has opened a series of charity games on a government-backed “Global Tour for Peace”, wearing the names of heavily bombarded cities on its jerseys.

The tour aims to raise money for Ukraine’s military in the war against Russia, and also help displaced Ukrainian refugees. Its first game on Saturday was a 1-0 loss to Greek league leader Olympiacos.

Football clubs around Europe have been offering to play games against Ukrainian clubs and host young players.

Civilians remaining in Bucha are lining up for food donated by a local church in the battered Kyiv suburb where Ukrainian forces and journalists reported evidence of war crimes after Russian soldiers withdrew.

“We have gathered together with the youth from our church and prepared food for the needy,” Denysyuk said. “We prepared pilaf, boiled eggs, prepared meat, sausages, noodles.”

Ukrainian negotiator Mykhailo Podolyak says President Zelenskyy and Russian President Putin will not meet until after Ukraine had defeated Russia in the east, which would bolster Ukraine’s negotiating position.

“We are paying a very high price. But Russia must get rid of its imperial illusions,” he said, according to the Interfax-Ukraine news agency.

Ukrainian officials have urged civilians in the east of the country to flee. On Friday, officials said more than 50 people were killed in a missile attack on a train station in the city of Kramatorsk in Donetsk, where thousands of people had gathered to evacuate.

At a meeting in Kyiv, Johnson told Zelenskyy that Britain would provide armoured vehicles and anti-ship missile systems, along with additional support for World Bank loans.

Ukraine is ready for a tough battle with Russian forces amassing in the east of the country, Zelenskyy says.

The Ukrainian leader met Austrian Chancellor Karl Nehammer in Kyiv, warning in a joint news conference that while the threat to the capital had receded, it was rising in the east.

“This will be a hard battle, we believe in this fight and our victory. We are ready to simultaneously fight and look for diplomatic ways to put an end to this war,” Zelenskyy said.

A total of 4,532 people have been evacuated from Ukrainian cities through humanitarian corridors on Saturday, fewer than the 6,665 who escaped on Friday, according to a senior official.

Kyrylo Tymoshenko, deputy head of Ukraine’s presidential administration, made the announcement in an online post.

“Today, five people were killed after Russian shelling in the region of Donetsk,” Donetsk Governor Pavlo Kyrylenko posted on Telegram. Four of them died in the city of Vuhledar, and one in the town of Novomykhalivka, he added.

YouTube has blocked Duma TV, which broadcasts from Russia’s lower house of parliament, drawing an angry response from officials who said the world’s most popular streaming service could face restrictions in response.

On Saturday, a message on YouTube said the Duma channel had been “terminated for a violation of YouTube’s Terms of Service”.

YouTube, owned by Alphabet Inc’s GOOGL.O, has been under pressure from Russian communications regulator Roskomnadzor and officials were quick to respond.