Islamabad, Pakistan – Pakistani Prime Minister Imran Khan has said he will not resign, striking a defiant tone ahead of a no-confidence vote expected to take place on Sunday.

Khan, 69, lost his majority in parliament on Wednesday when a key ally quit his coalition, which could give the opposition the 172 votes in the 342-seat house needed to force him out.

The opposition has accused him of corruption and economic mismanagement, amid high inflation and a weakening currency.

“There is only one honourable exit for [Khan] and that is resignation,” Bilawal Bhutto Zardari, the chairman of the Pakistan Peoples Party (PPP), told reporters on Thursday.

But Khan, in a live address to the nation later on Thursday, rejected calls to step down.

“I will fight until the last ball,” the former cricket star turned politician said.

Khan also accused the United States of conspiring with Pakistan’s opposition to force him out, saying Washington wanted him to be deposed because he had been pursuing an independent foreign policy and had visited Russia after Moscow launched an invasion of Ukraine.

On Wednesday, Khan’s Pakistan Tehreek-e-Insaf (PTI)-led government said a diplomatic cable received from a foreign mission had revealed the conspiracy.

Khan said the document had contained a warning that “if Imran Khan remains the prime minister, our ties will suffer and you will face difficulties.”

“I will never let this conspiracy succeed, come what may,” Khan said.

On Wednesday, the US Department of State released a statement denying the allegations.

Khan’s opponents said the Pakistani prime minister’s claims about a conspiracy were baseless.

Former Foreign Minister Hina Rabbani Khar told Al Jazeera that such communications were normal and should not be taken as a threat.

“If this has been portrayed as a threat aimed at regime change, then it’s nothing but preposterous because diplomats sometimes speak quite frankly,” she said.

Meanwhile, a senior opposition lawmaker told Al Jazeera, on condition of anonymity, that Khan had asked the opposition to withdraw the no-confidence motion in return for him calling early elections. 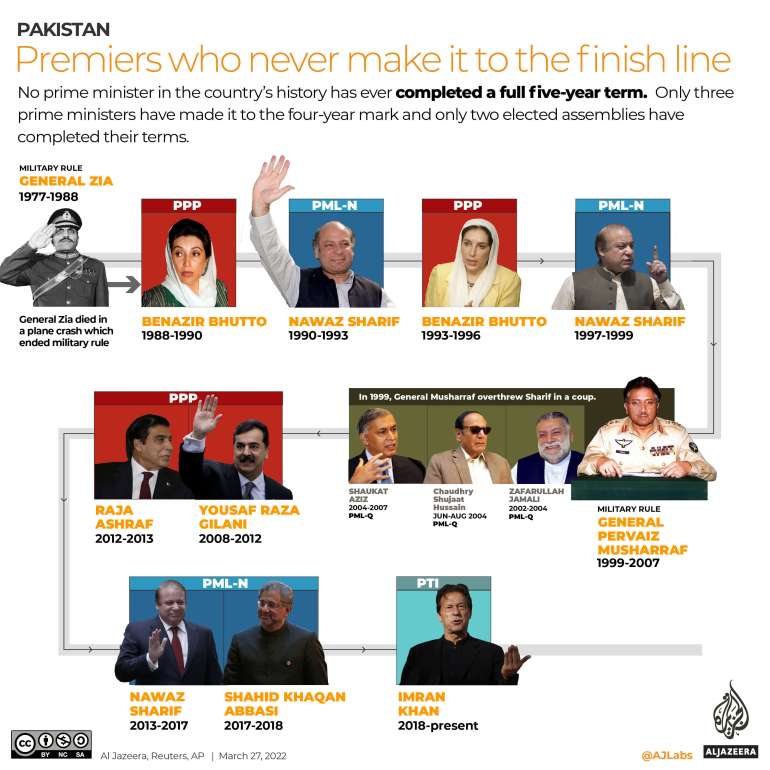 Earlier on Thursday, the government cut short a debate on the no-confidence motion when 172 lawmakers, the votes required to topple the government, were in attendance. The opposition’s numbers have swelled to 177, as nearly two dozen PTI legislators have deserted Khan’s coalition.

“We demand [the deputy speaker] hold the vote on no-confidence motion right now,” Marriyum Aurangzeb, a spokesperson for the party of former premier Nawaz Sharif, said in the parliament.

No Pakistani prime minister has ever completed his term in the country’s 75-year history, which has been marred by frequent coups by the military.

The military’s backing had been a stabilising factor for Khan’s administration but he reportedly lost that support after differences with the military leadership over the appointment of a new spy chief.

However, opposition leaders are now claiming that the military establishment is “neutral” in the current political crisis.

If Khan loses on Sunday, he would be the first prime minister to be removed through a vote of no confidence.