More than four million Ukrainians have fled the country within five weeks to escape Russia’s “senseless war”, the United Nations has said, as shelling continued in places where Moscow had pledged to ease its military activities.

The speed and scale of the exodus is unprecedented in Europe since World War II, and has seen a wave of empathy extended to the women, children and elderly men who have made it across the border.

The United Nations High Commissioner for Refugees (UNHCR) agency said on Wednesday that 4,019,287 Ukrainians had fled across the country’s borders since the February 24 invasion, with more than 2.3 million going west into Poland.

The number exceeds the worst-case predictions made at the start of the war. UNHCR’s initial estimate stated that the war could eventually create up to four million refugees.

“Refugees from Ukraine are now four million, five weeks after the start of the Russian attack,” UNHCR chief Filippo Grandi said on Twitter.

“I have just arrived in Ukraine. In Lviv I will discuss with the authorities, the UN and other partners ways to increase our support to people affected and displaced by this senseless war.”

Commenting on the development, Alex Mundt, the UNHCR senior emergency coordinator in Poland, said: “I think it’s a tragic milestone.”

“It means that in less than a month or in just about a month, four million people have been uprooted from their homes, from their families, their communities, in what is the fastest exodus of refugees moving in recent history.”

Refugees from Ukraine are now 4 million, five weeks after the start of the Russian attack.

I have just arrived in Ukraine.

In Lviv I will discuss with the authorities, the UN and other partners ways to increase our support to people affected and displaced by this senseless war.

Women and children account for 90 percent of those who have fled. Ukrainian men aged 18 to 60 are eligible for military call-up and not permitted to leave.

United Nations Children’s Fund (UNICEF) says more than half of the country’s estimated 7.5 million children have been displaced: 2.5 million internally and 1.8 million abroad.

“It is encouraging to see the outpouring of support offered to refugees by Ukraine’s neighbours and other countries,” said UN human rights chief Michelle Bachelet. 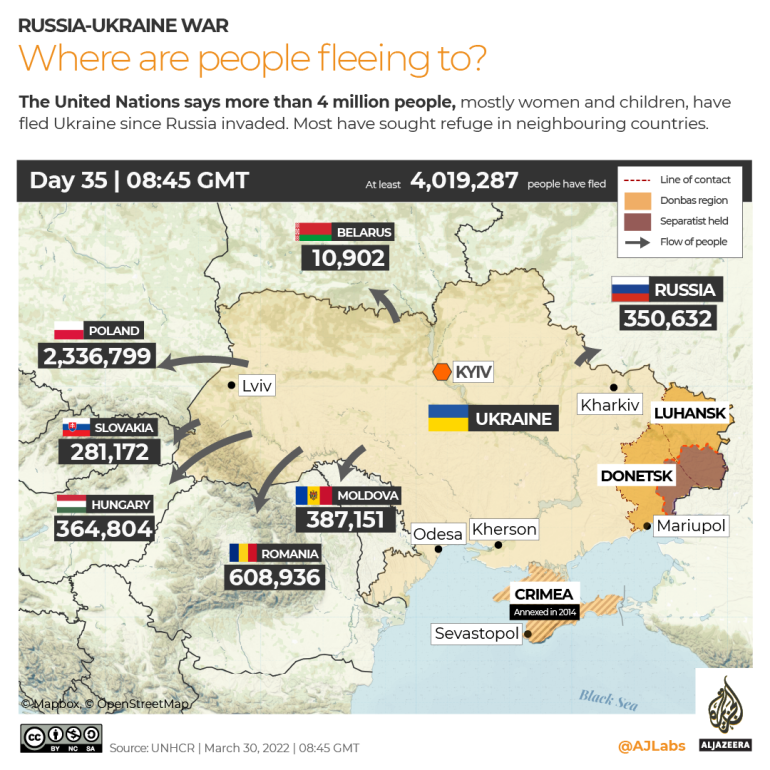 But she urged destination countries “to provide particular protection to women and children, many of whom face risks of human trafficking, including sexual and labour exploitation”.

In total, more than a quarter of the Ukrainian population living in government-controlled areas before the invasion have been forced to flee their homes, with an estimated 6.5 million uprooted people still within the country’s borders.

Besides the Ukrainians who have fled, another 200,000 non-Ukrainians who were living, working or studying in the country have managed to escape.

“I do not know if we can still believe the Russians,” refugee Nikolay Nazarov, 23, told The Associated Press as he crossed Ukraine’s border into Poland with his wheelchair-bound father.

Despite Russia’s announcement during talks on Tuesday that its forces would ease their assault near Ukraine’s capital, Kyiv, and elsewhere, Nazarov said he expects “more escalation” in the country’s east, including the city he and his father fled.

“That is why we cannot go back to Kharkiv,” he said. “We are afraid of a new phase of war in eastern Ukraine.”

Nazarov echoed the opinion of Ukrainian President Volodymyr Zelenskyy. In his nightly video address, Zelenskyy said that given what was happening on the ground, there was no reason to believe Russia’s statement about reducing military activity near Kyiv and in Chernihiv, a besieged northern city.

“We can call those signals that we hear at the negotiations positive,” Zelenskyy said in his address to the Ukrainian people. “But those signals don’t silence the explosions of Russian shells.”

Diana Konstantynova, a 45-year-old accountant from Vinnytsia in south Ukraine, told the AP that Russia’s promise to scale back its attacks is not a signal she can safely return home.

“I do not believe in a truce,” said Konstantynova, who fled to Romania with her eight-year-old son a month ago. She says they will only return when “bombs stop exploding in my city” and “when Russian troops completely leave our territory”.