Advances in satellite technology have revealed that the world’s glaciers contain significantly less ice than previously thought, according to a study published in Nature Geoscience.

The revised estimate reduces global sea level rise by 3 inches (7.62 centimetres) if all glaciers were to melt.

But it raises concern for some communities that rely on seasonal melt from glaciers to feed rivers and irrigate crops. If glaciers contain less ice, water will run out sooner than expected.

While some ice naturally melts throughout the year, rising temperatures due to climate change are speeding up glacier retreat. Between 2000 and 2019, these rivers of ice lost roughly 5.4 trillion tonnes.

Countries are already struggling with disappearing glaciers. Peru is investing in desalination to make up for declining freshwater. And Chile hopes to create artificial glaciers in its mountains.

“We’ve had quite a poor understanding of how much ice is actually stored in glaciers,” said lead study author Romain Millan, a glaciologist at Université Grenoble Alpes. Past analyses, for example, double-counted glaciers along the peripheries of the Greenland and Antarctic ice sheets, overestimating ice volume.

The Nature Geoscience study, published on Monday, assessed how quickly glaciers were moving across the landscape, or their velocity. Such measurements allow scientists to more accurately measure volume, as the way glaciers flow indicates where ice is thick or thin. But collecting this information has been limited by technology.

High-resolution satellites deployed in recent years, however, allowed for the first analysis of how 98 percent of the world’s glaciers are moving, “from small glaciers in the Andes up to massive glaciers in Svalbard and Patagonia,” said Millan.

“Our study does not include the Greenland and the Antarctica which in the long-term will be the major drivers of sea-level rise,” Millan told Al Jazeera from Grenoble.

“Just looking at the total volume of the ice sheets compared to the glaciers if all Antarctica would melt, it has the potential to increase the sea-level rise by more than 50 metres, which is way more than the 25 centimetres from the glaciers,” he said.

The work analysed more than 800,000 pairs of images of glaciers taken between 2017 and 2018, and found that many were shallower than previously assessed.

Scientists now estimate there is 20 percent less glacial ice present with the potential to melt into the ocean and raise sea levels. Currently, glaciers are responsible for 1 millimetre of annual sea level rise, or 30 percent of the yearly increase. 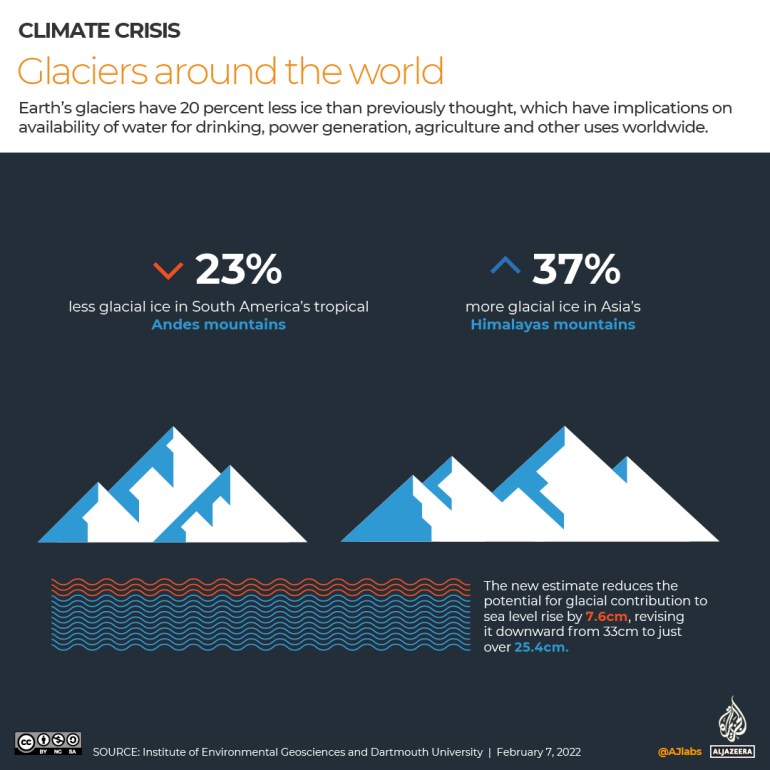 “This is one of the first really impressive results coming out” from satellite advances, said Daniel Farinotti, a glaciologist at ETH Zurich not involved in the research.

According to Millan, the parts of the world that are going to be most affected are the Andes, where the study suggests there should be less freshwater availability for people.

“In the contrary in the Himalayas, we found that there is likely more freshwater which can reduce the pressure on these resources there,” he said.