Russian President Vladimir Putin’s order on Sunday to place Russia’s nuclear forces on high alert is part of a pattern of escalating tensions following his attack on Ukraine. But analysts suggest the move is likely a dangerous new bluff.

What are deterrence forces?

Western powers including the United States and NATO protested sharply after Putin said in a televised address that the country’s nuclear “deterrence forces” were placed “into a special mode of combat service”.

The UN called the idea of nuclear weapons’ use “inconceivable”, while Ukraine’s government said it saw the move as an intimidation attempt as delegations from both countries prepared to meet for exploratory talks.

Just as in NATO, a portion of Russian nuclear weapons are in constant readiness and “can be launched within 10 minutes”, said Marc Finaud, a nuclear proliferation expert at the Geneva Centre for Security Policy.

“Either the warheads are already mounted on missiles, or the bombs are already aboard” bombers and submarines, he explained.

In a Friday article for the Bulletin of the Atomic Scientists, experts Hans Kristensen and Matt Korda wrote that Russia keeps almost 1,600 warheads deployed.

“Since Russian strategic forces are always on alert, the real question is whether [Putin] has deployed more subs or armed the bombers,” Kristensen wrote on Twitter on Sunday.

Why up the alert level?

Most analysts suggested that brandishing the nuclear option is a desperate move resulting from Russia’s military setbacks since attacking Ukraine last week.

Rather than a swift victory with armoured assaults claiming swathes of territory, Moscow now faces “urban guerilla warfare, with a high probability of casualties among the Russian soldiers”, he added.

Eliot A Cohen of the Center for Strategic and International Studies (CSIS) in Washington, DC, said Russian military leaders expected an easier campaign.

“The fact that they don’t have air superiority now four days into this, that’s pretty revealing,” Cohen said.

“You are beginning to see the weaknesses on the battlefield … The fact that they haven’t been able to occupy a city and hold on to it, that tells you something.”

With Western aid flowing to Ukraine and economic sanctions hailing down on Russia and its elite, Putin’s public declaration could be an attempt to divide his enemies.

The Russian leader “is something of a gambler and a risk-taker,” said Cohen. “What he’s trying to do is muscle us all psychologically.”

Khalfa agreed that “the psychological side of things is vital,” with Putin “desiring to deter the West from going any further with economic sanctions”.

“Everyone is rallying behind the Ukrainian flag, and he has a will to drive a wedge between the [NATO] alliance’s governments and public opinion in Western countries,” he said.

But Khalfa also recalled “in the opinion of everyone who has met Putin, he’s isolated himself, locked into paranoid logic … his strategy is impossible to read.”

Putin’s nuclear menace is all the more puzzling because it departs from established Russian nuclear deterrence doctrine.

In 2020, Putin approved “basic principles” with four cases when Moscow could use nuclear weapons.

They were when ballistic missiles were fired at Russia’s or allied territory, when an enemy used nuclear weapons, an attack on a Russian nuclear weapons site, or an attack threatening the existence of the Russian state.

None of those criteria has been met in the current conflict.

What’s more, Russia joined the other four permanent members of the UN Security Council in January in signing a document affirming that “a nuclear war cannot be won and must never be fought”.

Putin’s latest verbal salvo shows up “the ambiguity, perhaps even hypocrisy, of this type of declaration”, said Finaud.

“If we were to apply the doctrine [of the joint statement] there’d be a massive effort at disarmament. Whereas we see that relatively little has been done in that direction.”

For now, “there’s still a very high risk of a slip-up or misinterpretation” or even a deliberate manipulation that could trigger a nuclear exchange, he added. 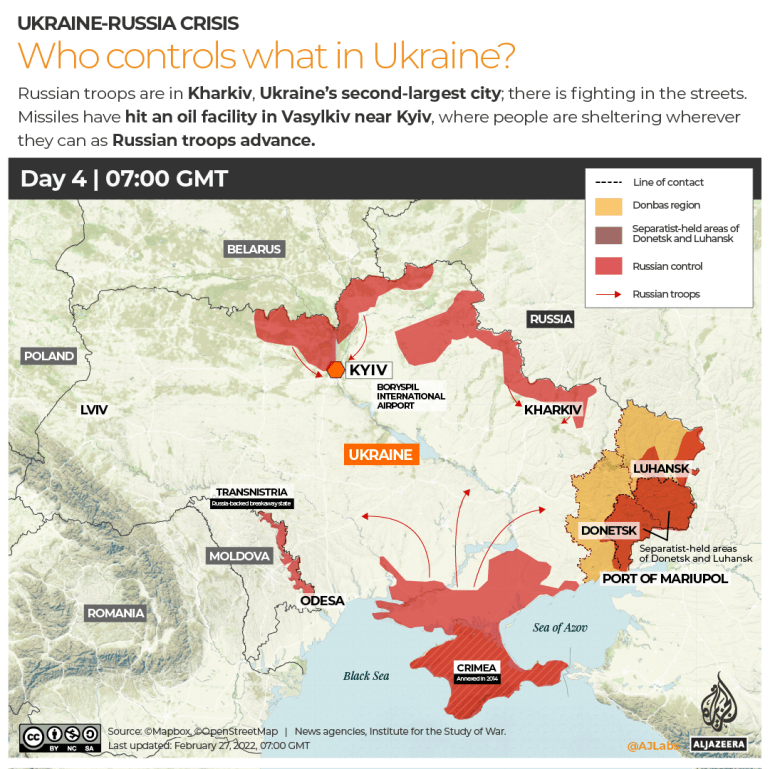