By Federica Marsi and Marium Ali

Wetlands – land consisting of swamps or marshes – have, during the centuries, been demonised as places of pestilence, drained for agriculture or urban development, and polluted or paved over.

But today, they are emerging as crucial ecosystems in the fight against climate change.

The Intergovernmental Panel on Climate Change (IPCC), the United Nations body for assessing the science related to climate, has warned of the need to pursue efforts to limit the temperature increase to 1.5 degrees Celsius (2.7 degrees Fahrenheit) above preindustrial levels.

The world’s wetlands, including marshes, peatlands, floodplains and coastal areas, are seen as key to achieving this goal – even as more than 35 percent of this wide variety of habitats has disappeared since 1970. 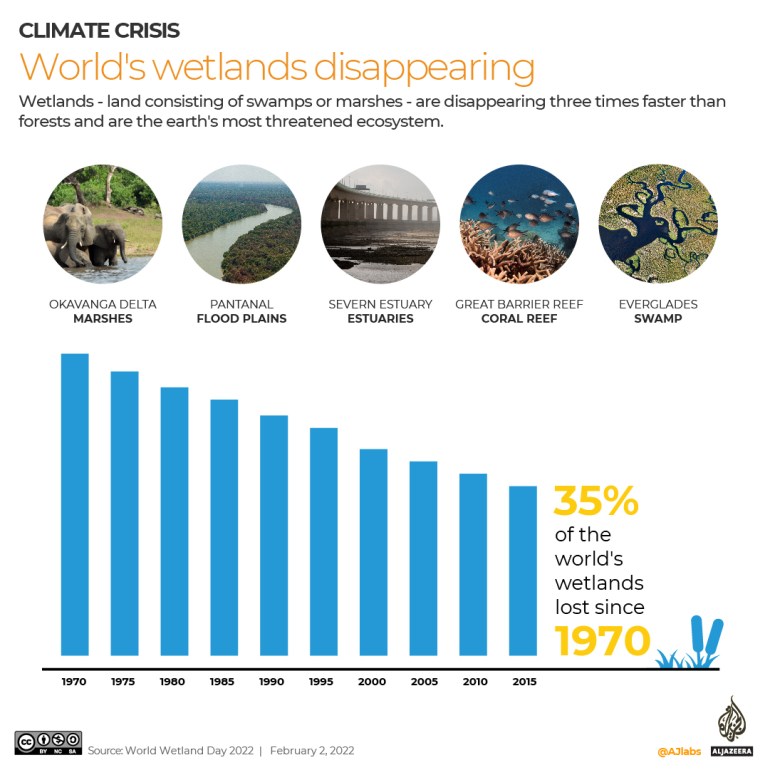 Long-term carbon sequestration rates in wetlands are up to 55 times more efficient than tropical rainforests. “Blue carbon” captured by living organisms in coastal and marine ecosystems and stored in biomass and sediments has been recognised by the IPCC as having a dual role in providing both climate mitigation and adaptation.

Peatlands, for instance, only cover 3 percent of the Earth’s land surface but store 30 percent of all land-based carbon. To meet the 1.5C Paris Agreement climate goals, the IPCC says further conversion and drainage must be prevented and 50 percent of all lost peatlands must be restored before 2030.

The stored carbon is stable and can remain for hundreds or thousands of years if left undisturbed, but if these environments are degraded or converted, they can become a significant source of greenhouse gases.

On February 2, 1971, representatives of 18 nations met in Ramsar, Iran and adopted the Convention on Wetlands, also called “the Ramsar Convention”.

“The rates of wetland loss are still exceeding the rates of loss of terrestrial ecosystems,” Jerker Tamelander, director of science and policy at the secretariat of the Ramsar Convention on Wetlands, told Al Jazeera.

But “the shift in how the world sees wetlands is partly a result of the work done as part of the convention”, including its scientific and technical review panel and how countries have responded to the data it collected.

The treaty today counts 172 signatories and February 2 is marked globally as World Wetlands Day. This year, it is observed as a UN international day, following its adoption by the General Assembly on August 30, 2021.

“Now you have this universal recognition that comes out of a General Assembly resolution that calls upon UN agencies and other agencies to observe and take action, so it’s a multiplier,” Tamelander said.

“It was very positive for us to see that more than 70 countries co-sponsored the resolution.”

What shifted in the global conscience, according to Tamelander, is the setting of climate goals, including the Sustainable Development Goals in 2015 by the UN General Assembly, aimed at achieving a “better and more sustainable future for all” by 2030.

“In order to achieve them we must pay close attention to wetlands,” he said. 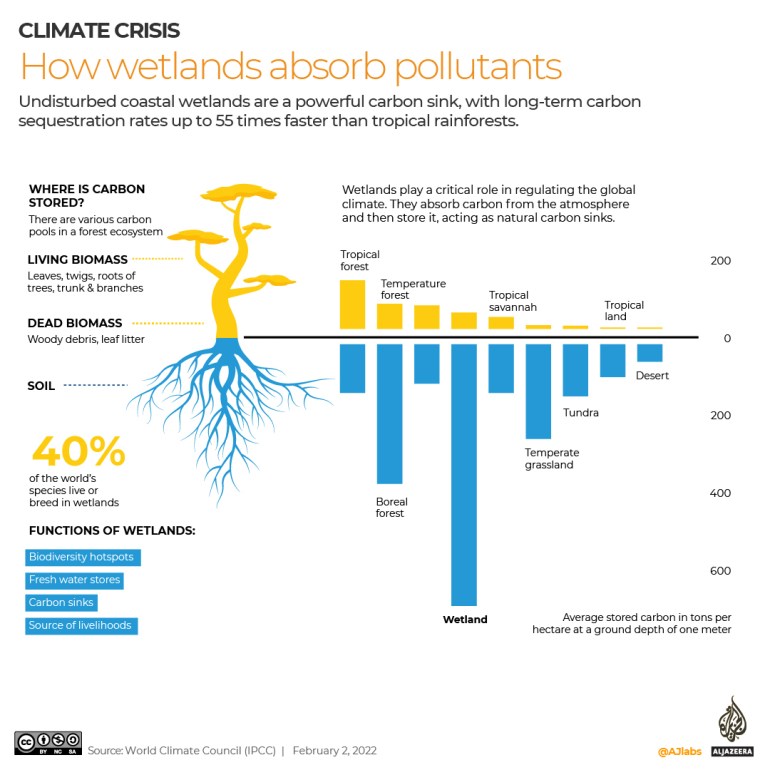 Although wetlands still cover a global area of 1.2 billion hectares (2.96 billion acres) – larger than Canada – the quality of remaining wetlands is suffering due to drainage, pollution, invasive species, unsustainable use, disrupted flow regimes and climate change.

According to findings by the Ramsar Convention, land-use change has been the biggest driver of degradation to inland wetlands since 1970, driven by population growth and, conversely, by the growing need for agricultural land.

Wetlands are estimated to bring health, food and water security benefits to four billion people globally by supporting agriculture as a source of water for crops and livestock, according to the Global Wetland Outlook, published by Ramsar in 2021. Additionally, they play a role in disaster risk reduction, such as droughts and floods.

The coronavirus pandemic has also brought to the forefront the links between the environment and health. The degradation of these fragile ecosystems is likely to boost wildlife trafficking, increasing the risks of disease emergence and transmission, as Ramsar estimated 40 percent of species are dependent on wetlands.

Transformative action is needed to reverse the trend of wetland loss and degradation, according to Ramsar.

“Agriculture is very much dependent on water, you need the wetlands for agriculture,” Tamelander said. “So agricultural funding that is directed at wetland protection is a good agricultural investment. That’s what we should be pursuing as much as possible.”