An electrical fault is believed to have caused a massive fire that tore through a hotel and casino in the Cambodian border town of Poipet, killing 26 people and leaving more than 60 injured, the country’s disaster management agency said.

The fire, which started at about midnight on Wednesday (17:00 GMT), was finally put out at 2pm (07:00 GMT) on Thursday. Videos posted on social media showed people falling from a roof after they became trapped by the blaze at the Grand Diamond City complex.

Kun Kim, deputy chairman of the National Committee for Disaster Management, said on Saturday that 26 people – including 17 Thais, one Malaysian, and one Nepalese – had died in the blaze.

“Some people were burned to death, some died because of a lack of oxygen, and some were burned and died along exit ways,” he said.

He admitted authorities took too long to put out the flames and blamed the hotel-casino’s complex layout, as well as a lack of rescue equipment.

Provincial police chief Sithi Loh said 360 emergency services personnel and 11 firetrucks had been sent to the scene of the fire.

The casino, popular with gamblers and visitors from nearby Thailand, employed about 400 workers. 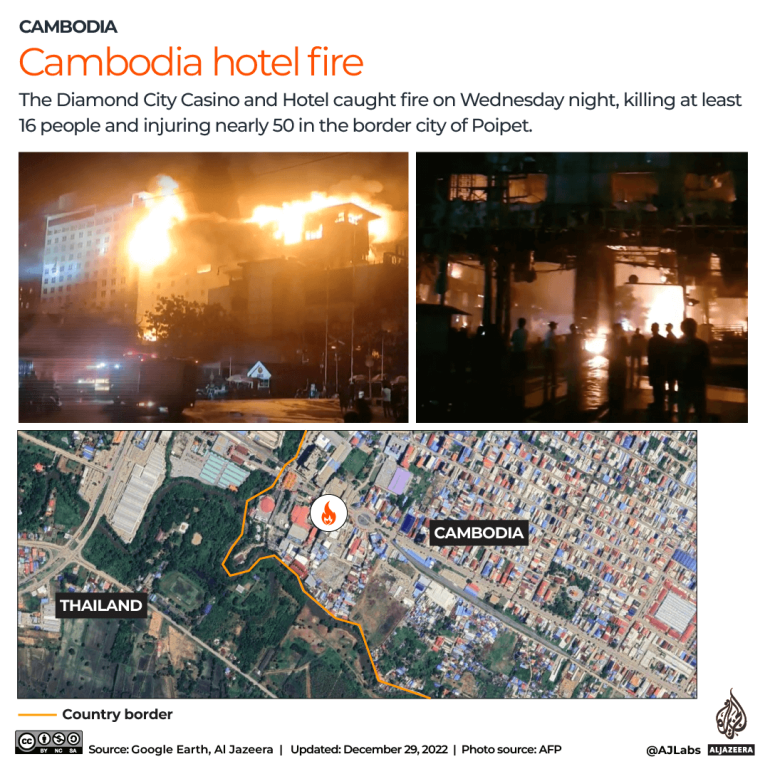 Nhem Phoeng, chief of administration at the municipal offices of Poipet – located 400km (250 miles) northwest of the capital, Phnom Penh – said most of those who had died were employees at the casino, according to the Phnom Penh Post news site.

The injured were transported to hospitals in Thailand’s neighbouring Aranyaprathet city in Sa Kaeo province.

Thai authorities in Sa Kaeo province said 13 of those rescued were on life support.

Video clips shared on social media showed the sprawling building engulfed in flames and what appeared to be people jumping from the burning structure.

In a clip posted by Cambodia’s firefighting agency, onlookers could be heard shouting pleas to rescue people trapped on the roof of the multistorey hotel complex. The video showed at least one man falling as the flames reached the roof.

The Department of Fire Prevention, Extinguishing and Rescue posted that calls for help were heard from the 13th, 14th and 15th floors at 4am and hands were seen waving from windows as well as a mobile phone’s flashlight signalling from inside the complex.

“The fire was massive, and was inside the casino, so it was difficult for our water cannons to reach it,” observed a firefighter on the video posted online by the fire department. He said that was the reason the fire continued burning for such a long time.

A volunteer with the Thai rescue group Ruamkatanyu Foundation said the blaze started on the first floor but spread quickly along the carpets, leaping up through the building.

The Grand Diamond City is one of a number of casino-hotel complexes clustered along the Thai-Cambodian border.