Ministers of the European Union of Foreign Affairs have imposed new sanctions on Iranian religious leaders, senior officials and top state media employees over new crackdowns on antigovernment protests and supplying drones to Russia for use in Ukraine.

Twenty individuals and one entity were sanctioned on Monday over human rights abuses, while four more people and as many entities were added over the issue of drones. Sanctions include freezing of assets and travel bans to the EU.

The state-owned Islamic Republic of Iran Broadcasting had its assets frozen; the EU said the media outlet was a “mouthpiece” for “the violent response to the recent demonstrations in Iran”.

Iranians have protested against the government’s restrictions on their daily lives since late September, following the death of 22-year-old Mahsa Amini, who was arrested for allegedly violating the Islamic Republic’s strict dress code.

The antigovernment protests, which have turned into a popular revolt by Iranians from all sections of society, now pose one of the biggest challenges to the country’s leaders since the 1979 Iranian revolution, which led to the establishment of the Islamic Republic.

The EU “will take any action we can to support the young women and peaceful demonstrators”, said the bloc’s foreign policy chief, Josep Borrell.

In a statement, the ministers said: “The European Union strongly condemns the widespread, brutal and disproportionate use of force by the Iranian authorities against peaceful protesters, including women and children, leading to the loss of hundreds of lives.”

On Monday, Iran executed a second man, who was arrested during the nationwide protests, by publicly hanging him from a construction crane as a dire warning to other protesters.

“With this sanctions package, we are targeting, in particular, those who are responsible for the executions [and] the violence against innocent people,” said German Foreign Minister Annalena Baerbock.

The ministers also hit out at Iran for supplying drones to Russia, saying the “weapons provided by Iran are being used indiscriminately by Russia against Ukrainian civilian population and infrastructure, causing horrendous destruction and human suffering”.

Russia stands accused of sending Iranian-made drones over Ukraine to strike at power plants and other key infrastructure. The EU has said it had evidence that Iran sold drones to Russia since the war began in February.

In recent weeks, despite denials by Iran and Russia, images of the Shahed-136 drones (rebranded in Russia as Geran-2), their distinctive delta wings silhouetted against the sky, have circulated around the global media.

Iran has confirmed it shipped a small number of drones to Russia, but that it had done so before Moscow’s invasion of Ukraine.

Western leaders have said that they believe Tehran will also soon supply Russia with ballistic missiles.

The foreign ministers warned Iran against supplying more weapons, and “in particular, any steps towards possible transfers of short-range ballistic missiles to Russia, which would constitute a serious escalation”.

They said the EU would respond to any act that supports Russian aggression against Ukraine “and hold Iran accountable, including through additional restrictive measures”.

Last month, the EU imposed sanctions on the chief of Iran’s Revolutionary Guard, the guard corp’s Aerospace Force and a company making drones that the bloc said Russia has used in Ukraine. 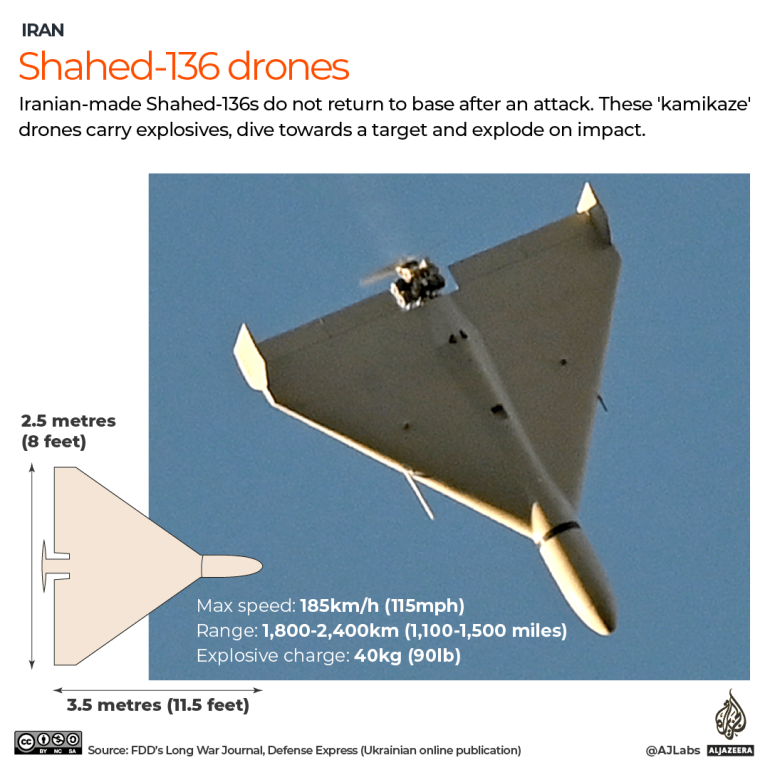