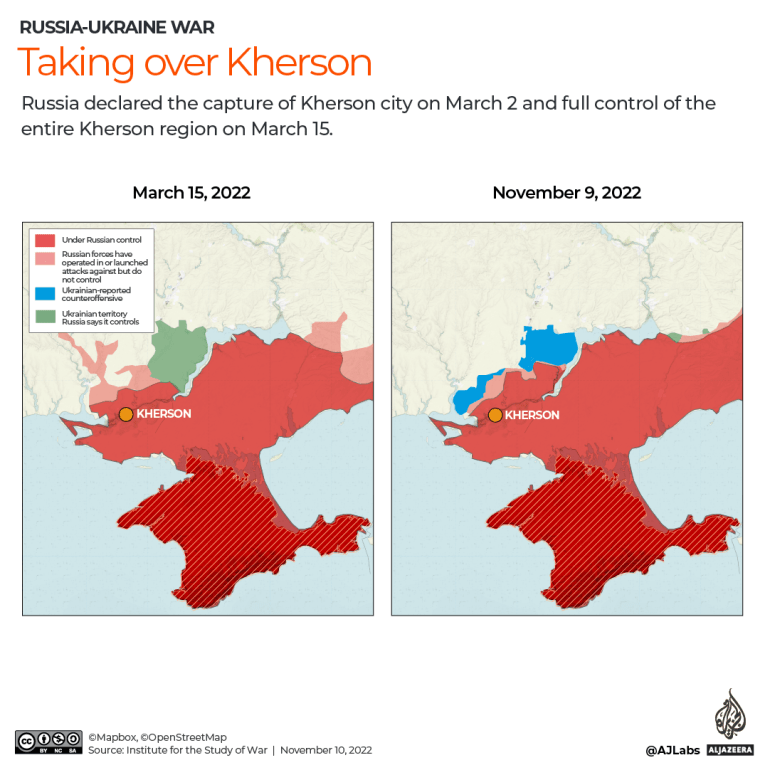 “The coming months will be difficult. [Russian President Vladimir] Putin’s aim is to leave Ukraine cold and dark this winter,” he told reporters in The Hague after meeting the Dutch foreign and defence ministers.

“We should not make the mistake of underestimating Russia,” Stoltenberg said, stressing that Moscow’s forces “retain significant capabilities, as well as a large number of troops”.

The city of Kherson was the first major urban hub to fall to Russian forces after Russia’s February 24 invasion of Ukraine, and the only regional capital Moscow’s troops gained control over.

Russian forces withdrew last week after General Sergey Surovikin announced that they could no longer keep the area supplied.

Moscow’s retreat “demonstrates the incredible courage of the Ukraine armed forces, but it also showed our continued support for Ukraine”, Stoltenberg said.

The city’s liberation is the latest in a string of setbacks for the Kremlin after being pushed back from large portions of territory in the south and east.

Ukrainian President Volodymyr Zelenskyy on Monday visited the newly freed city after saying on Sunday that evidence had uncovered hundreds of new “war crimes” carried out by the Russian occupiers.

“You have all seen the horrific scenes from the liberated territories and the indiscriminate attacks on civilians and critical infrastructure,” Stoltenberg told reporters.

It was not clear whether he referred to Kherson specifically.

Stoltenberg also said that it was now up to Ukraine to decide the terms for negotiations to end the war.

Kremlin spokesman Dmitry Peskov declined to comment on Zelenskyy’s visit to Kherson and insisted: “This territory is part of the Russian Federation.”

“We all now see, with the liberation of Kherson, that the Ukrainian strategy is working,” Ollongren said.

“But winter is coming … and we must stay the course.

“If Russia stops fighting tomorrow, there is no more war anymore.

“If Ukraine stops fighting, there will be no more Ukraine,” she said.