Istanbul, Turkey – Crowds have begun returning to Istiklal Avenue, the busy pedestrian street in central Istanbul where a bombing on Sunday killed six people and wounded 81. Locals expressed shock and defiance after the attack.

Furkan works at a chocolate shop steps away from where the bomb went off.

“At about 4:20pm [13:20 GMT] we were smoking a cigarette by the door,” he told Al Jazeera. “All of a sudden, the explosion happened. We were astonished. It was a terrifying situation.”

He said a crowd quickly formed in the area and he was worried about the possibility of a second bomb going off. The shop closed for the rest of the day, but he was back at work on Monday.

Police had closed off all entrances to Istiklal following the explosion. The street was reopened on Monday although the main entrance was temporarily blocked by police until 3:45pm (12:35 GMT) as politicians visited the site of the blast, where flowers have been placed as a memorial for the victims. Istiklal was lined with Turkish flags, as many as 1,200, according to some accounts.

The blast killed a nine-year-old girl and her father, a teenager and her mother, and a married couple. All were Turkish citizens.

On Monday, authorities said 57 injured people had been discharged  after treatment while 24 wounded, including two people in critical condition, remained in hospital. 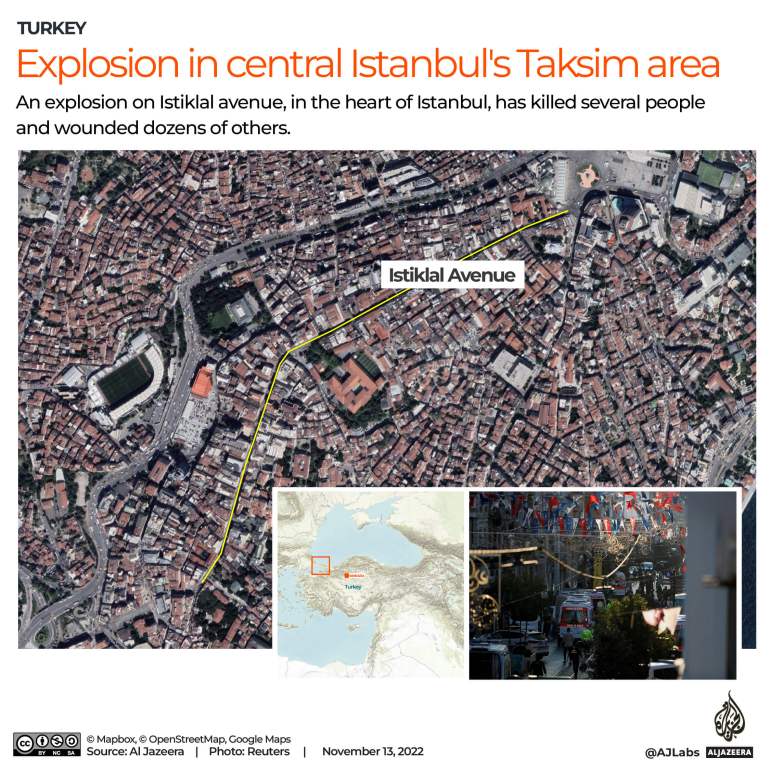 Istiklal had a heavy police presence and was not as bustling as usual on Monday, but nevertheless, there were many pedestrians walking down the street.

Metincan Alkan, 30, works at Marlen, a bar on a backstreet not far from where the explosion took place. He said businesses in the district will be hit hard after the attack.

“People will again start to [stay] away from Beyoglu,” he said. “I mean, it’s bad for us from every angle.”

Mustafa Topcuoglu, 53, is a fixture of Istiklal Avenue, known for his icli kofte – pouches of bulgar wheat filled with spiced meat – which he sells from a small street stand a few minutes away from where the explosion occurred.

He told Al Jazeera that he was upstairs in his adjacent restaurant and heard the blast but was back at his post on Monday afternoon.

“The purpose of terrorism is to make people afraid, create an air of panic and keep them shut in their homes,” Topcuoglu said. “No matter what, we still came, we’re at work, we continue with our work and we opened again.”

The person suspected of planting the bomb on a bench, a Syrian woman named Ahlam Albasir, was arrested in the Istanbul suburb of Kucukcekmece early on Monday. At least 46 people had been taken into custody in connection with the attack as of early evening.

According to media reports, the Istanbul Police Department said Albasir had confessed to having links to the banned Kurdistan Workers’ Party (PKK) and its Syrian affiliate, the People’s Defence Units (YPG).

However, in statements on Monday, the PKK and the Syrian Democratic Forces (SDF), which is mostly comprised of YPG fighters, denied responsibility for the attack.

The blast has revived grim memories of a series of attacks carried out by groups connected to the PKK and by ISIL (ISIS) throughout Turkey from 2015 to 2017. In March 2016, an ISIL-linked suicide bomber killed four people on Istiklal Avenue.

Soner Cagaptay, senior fellow at the Washington Institute, told Al Jazeera that further violence would likely have a bearing on Turkey’s parliamentary and presidential elections set for June.

“This is quite a worrisome development, and we will have to wait and see who is behind it and if there is any group that is going to assume responsibility,” he said.

“This attack, if followed by others, could result in the electorate swinging to the right and consolidating around the security candidate,” Cagaptay said. “This is what happened the last time Turkey went through a series of terror attacks in 2015.”