On the front line in Kherson, a Ukrainian artillery crew in an empty field fires two quick blasts into the distance targeting Russian forces.

Dressed in camouflage uniforms, they immediately pack up and move fearing Russian return fire, trying to hide from Russian surveillance drones and those with weapons.

“Now we dominate, they are slowly retreating. The Russians used all [troop] reserves but they could only reach our front line,” artillery commander Kosiak, 22, told Al Jazeera.

“The situation with drones is complicated. They are flying always, every day and every hour. It was scary only at the beginning of war, now we just do our job. Even when they fire back at us, we don’t panic. We are used to war,” he said.

Kherson city is the only regional capital captured by Moscow since its invasion began on February 24. For several weeks Ukrainian forces have advanced towards the industrial port.

Russian General Sergey Surovikin ordered troops to withdraw from Kherson on Wednesday to the eastern bank of the Dnieper river. Ukraine officials responded with caution, warning the announcement may be a trap.

“Politically it’s very embarrassing. Militarily it makes sense and that’s why most likely the Russian generals pressed through with such a decision,” said Felgenhauer. 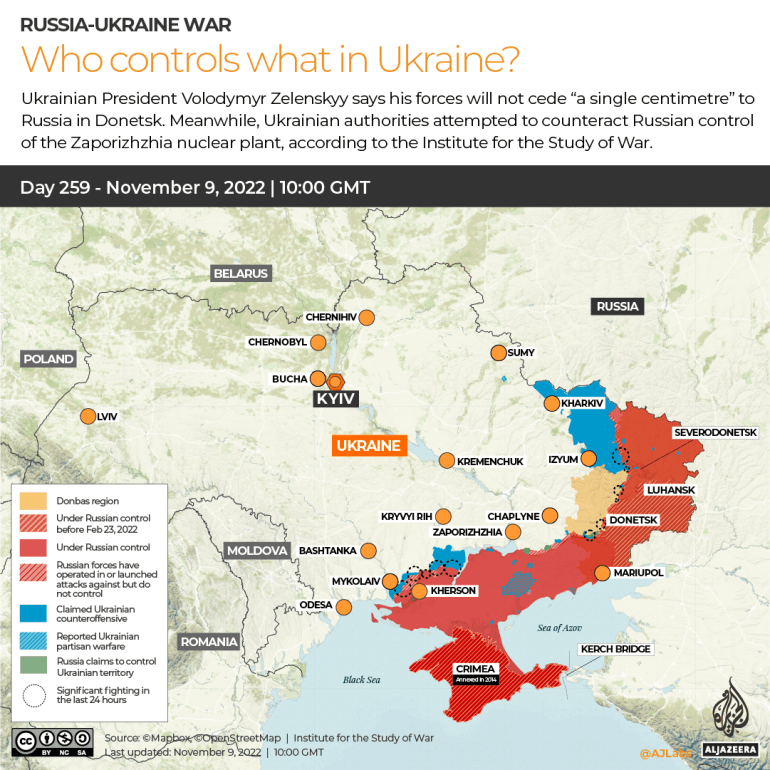 Back on Kherson’s battlefield, the weapons Ukrainian forces use are sometimes twice as old as those firing them. As they load missiles onto a truck, a soldier writes the names of fallen comrades on the explosives to be fired towards the Russians.

“As a commander, the scariest thing is to lose people. Everyone here in the infantry, artillery, and engineering brigade is scared to be under the enemy’s fire,” said Vadym, 23.

“Russians use everything they got – guns, artillery … MLRS [multiple launch rocket systems]. The enemy is not ashamed to use all types of weapons.”

The military unit stays out of sight and awaits further orders and intelligence relayed from unmanned aerial vehicles.

“Certainly, this is a war of drones. In most cases, artillery fire adjustments are made from drones. Both small commercial ones and larger drones have made the difference,” Vadym said.

“The Russians were close a few months before, but now the front line is moving,” said infantry commander Mykhailo, 42. “Jets and drones are always flying overhead, but for observation only. Mostly it’s Russian drones. We don’t see them but they keep flying.”

Al Jazeera’s Assed Baig, reporting from the Kherson region, said Ukrainian forces believe it is just “a matter of time” before they remove the Russians from their country.

But Felgenhauer cautioned: “This is not a Russian defeat, since they apparently will be withdrawing in an organised manner. The Ukrainians will be advancing very cautiously, afraid of some kind of Russian trickery.

“But the decisive moments may come when winter sets in, and tanks and trucks can move easily again through fields and dirt roads, then there’s going to be real action coming, which may be decisive in this war.

“I believe the Ukrainians will be poised for a massive offensive; they’ll try at least to do that and push the Russians really hard out of Ukraine,” he said.