A former police officer opened fire at a daycare centre in Thailand killing at least 35 people, mostly children, before turning a weapon on his family and then himself.

The attacker – armed with a shotgun, pistol and a knife – began the killing spree in Nong Bua Lam Phu province at about 12:30pm (05:30 GMT) on Thursday before fleeing the scene in a pick-up truck.

The dead included at least 23 children, said police Colonel Jakkapat Vijitraithaya. The gunman forced his way into a locked room where children were sleeping at the time, according to a witness.

After the attack, the gunman went home and killed his wife and child, Jakkapat said.

The attacker was named as former police officer Panya Khamrab, 34, and Jakkapat said he was dismissed from the force last year for drug use.

Nanthicha Punchum, acting head of the nursery, described harrowing scenes as the attacker barged into the building.

“There were some staff eating lunch outside the nursery and the attacker parked his car and shot four of them dead,” she said. “The shooter smashed down the door with his leg and then came inside and started slashing the children’s heads with a knife.”

Video shows the scene outside a children’s daycare centre in northeast Thailand where more than 30 people, including children, have been killed in a mass shooting.

The children at the daycare centre in Uthai Sawan, a town 500km (310 miles) northeast of the capital Bangkok, were mostly stabbed to death, police said.

Footage after the attack showed distraught parents weeping in a shelter outside the nursery, a yellow single-storey building set in a garden. 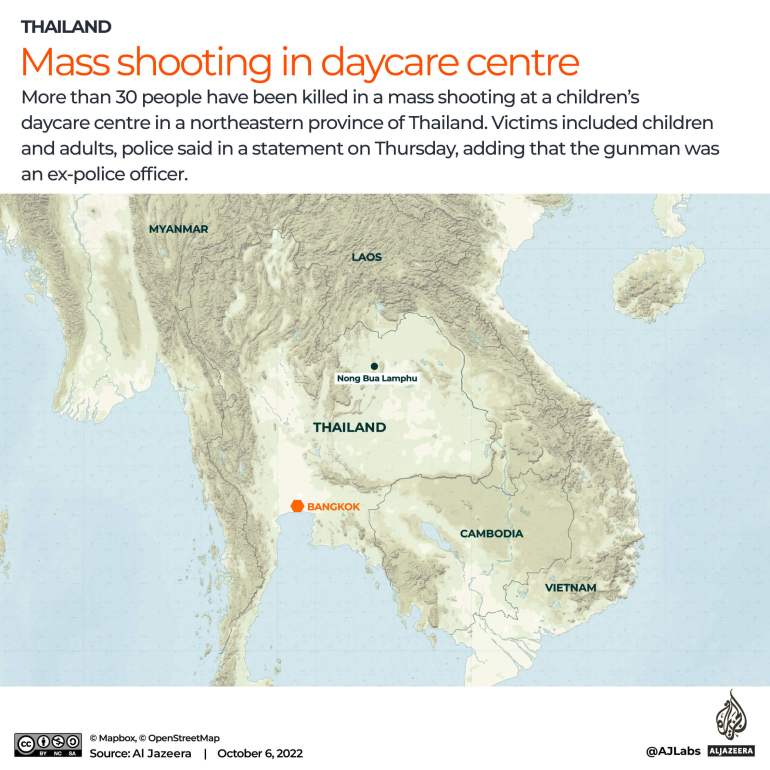 ‘Thought it was fireworks’

About 30 children were at the centre when the gunman entered at around lunchtime, district official Jidapa Boonsom said.

The man first shot four or five staff, including a teacher who was eight months pregnant, Jidapa said. “At first people thought it was fireworks… It’s really shocking. We were very scared and running to hide once we knew it was a shooting. So many children got killed, I’ve never seen anything like it.”

Photographs showed at least two bodies on the floor of the centre covered in white sheets.

Witness Paweena Purichan, 31, was riding her motorcycle to her shop when she encountered the fleeing assailant driving erratically. “He intended to crash into others on the road,” she said.

“The attacker rammed a motorbike and two people were injured. I sped off to get away from him. There was blood everywhere.”

Killed his wife and child

Police spokesperson Paisan Luesomboon told broadcaster Thai PBS the gunman had been at a court hearing in connection with a drug case earlier on Thursday and had gone to the daycare to find his own child, but the child was not there.

“He was already stressed and when he couldn’t find his child he was more stressed and started shooting,” Paisan said, adding he then drove home and killed his wife and child there before taking his own life.

Thai Prime Minister Prayut Chan-O-Cha ordered the national police chief to “fast-track an investigation” and said he would travel to the scene of the attack on Friday.

Gun laws are strict in Thailand where possession of an illegal firearm carries a prison sentence of up to 10 years, but ownership is high compared with some other countries in the region.

Mass shootings are rare in Thailand but in 2020 a soldier angry over a property deal killed at least 29 people and wounded 57 in a rampage that spanned four locations.